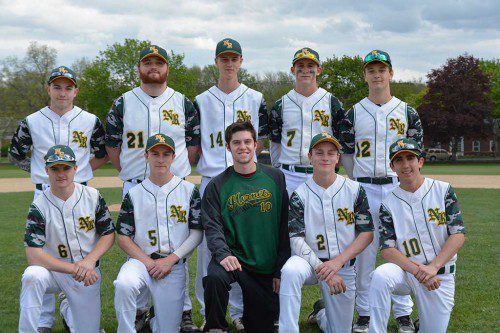 NORTH READING — In the title game of the Nipper Clancy Tournament at Fraser Field in Lynn last Saturday afternoon, the North Reading High baseball team was edged by St. Mary’s, 2-1, in the Hornets final game of the regular season.

With the loss, the Hornets ended the regular season at 17-3.

“It was a great pitchers dual,” pointed out Hornets manager Eric Archambault.

The Spartans Matt Costanza and the Hornets Dan Madden went toe-to-toe as both guys went the full game on the hill.

North Reading scored one run in the bottom of the second inning while the Spartans scored twice in the top of the third.

Madden allowed the two runs on seven hits. He walked one and struck out four as his record dipped to 5-1.

North Reading mustered only four hits off Costanza and the run they scored was on an error.

“This was a good test to get us ready for the tournament,” said Archambault.

In the first game of the tournament last Friday, the Hornets beat Lynn English, 5-1. Mike McCauley was the winning pitcher going to 7-1 going all seven frames. He gave up four hits, seven walks and he fanned six Bulldog batters.

“The hits he allowed were scattered so the walks he gave up didn’t hurt him,” said Archambault.

North Reading had seven hits led by Shawn DiVecchia and Jarred Valade who both went 2 for 3. Jeff Mejia and Bob Donohue both knocked in one run each.

The Hornets big inning came in the fourth when they scored four times.

In their final Cape Ann League game last Wednesday, the Hornets fell at home to Lynnfield, 5-4, in nine innings.

“It was one of the craziest game that I have been part of,” said Archambault, as the game featured some strange plays.

McCauley got the loss in relief going 1/3 of an inning as the Pioneers scored off him in the top of the ninth.

The Hornets offense had eight hits led by Tyler Calos who was 3 for 4 with one RBI. Mike Driscoll was 2 for 4 while DiVecchia had a two-run single.

Donohue had an RBI to tie the game in the seventh inning but a base running mistake cost him the game-winning RBI.

The Hornets are the top seed in the Division 3 North State Tournament and will host the winner of the Brighton–Hamilton–Wenham preliminary round game on Saturday at 4 p.m. Brighton and Hamilton–Wenham are seeded 16th and 17th respectively.

The Hornets beat Hamilton-Wenham, 6-4, on May 6 at home while they did not play Brighton in the regular season.