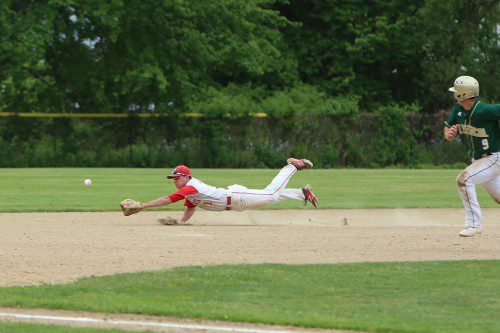 SHORTSTOP TIM Hurley, a junior, dives for a base hit as Matt Lauria (#9) takes off from second base. Hurley led the Warriors with three hits at the plate, scored two runs and knocked in a run. (Donna Larsson Photo)

WAKEFIELD — The Warrior baseball team had a great regular season and one for the history books at Wakefield Memorial High School. However, the postseason came to an end too soon for the Warriors and was a disappointing final chapter.

The second-seeded Wakefield squad had one bad inning — the fifth – and that proved to the difference as the Warriors were upset by 15th-ranked Lynn Classical by a 5-4 score yesterday afternoon before several hundred fans in attendance for the Div. 2 North first round contest at Walsh Field.

Wakefield (17-4) jumped out to a 2-0 lead and was cruising along through four innings with senior right-hander Corey Imbriano on the mound. But then the wheels came off in the fifth inning as the Rams (11-10) plated five runs on five hits and capitalized on two Wakefield errors to plate all their runs.

The Warriors didn’t quit and rallied for two runs in the seventh inning to cut the lead to 5-4. But Wakefield was unable to plate the equalizer as a pinch-runner was tagged after tripping and missing third on a force play which ended the game and the season for the two-time Middlesex League Freedom division champs.

It was the second year in a row that Wakefield lost in the first round of the tournament. The Warriors were upset last year by a 4-2 score by Concord-Carlisle. Wakefield is still seeking its first postseason win since 2003 when it was the Div. 2 North runner-up.

“We had the one bad inning defensively,” said Coach Keith Forbes, who finished his third year as head coach for the Warriors and is still seeking his first tourney win.  “We scored a couple of runs in the first inning and then got a little lackadaisical which we’ve done at times. Their pitcher wasn’t overpowering, but he threw strikes and didn’t walk many batters. He pounded the outer half of the strike zone and we didn’t make the adjustment. They also were very good defensively. Give them credit, they beat us.”

Imbriano, meanwhile, went four and one-third innings and suffered his first loss of the year. The righty gave up five runs (all unearned) on five hits while striking out six and walking one.

Tyler Way reached on an infield single to shortstop to start the game and stole second base. But Imbriano retired the next three batters.

Wakefield took a 2-0 lead in the bottom of the first inning.

Imbriano reached on infield hit to first base, stole second and took third on a wild pitch. Hurley singled to right field to score Imbriano. McGunigle then ripped a base hit to left field. After a pair of strikeouts, Guanci lined a single through the hole at shortstop as Hurley crossed the plate.

The Warriors had runners on first and second but were unable to plate any more runs as a fly ball to left field ended the frame.

Imbriano and Hurley had two out singles in the second inning. But a pop up to second base resulted in no runs.

Guanci doubled to left field with two outs in the third inning but was thrown out trying to steal third base.

Lynn Classical, meanwhile, had two base runners in the second and fourth innings. In the third, Imbriano struck out the side. In the second, Herbie Newton walked but Wakefield turned a 6-4-3 double play as Imbriano faced just the minimum three batters in the frame. In the fourth, Matt Lauria led off with a single and took second on a passed ball. But Imbriano retired the next three batters as the contest remained at 2-0.

That all changed in the top of the fifth inning as Lynn Classical sent 10 batters to the plate and took a 5-2 lead.

David Bernard lined a single up the middle and Stanley helped his own cause by doubling to right field. After a pop up to first base for the first out, the roof caved in on Wakefield.

Andrew Moccia tapped a grounder to second baseman Kevin DeLeary, a sophomore. DeLeary had thoughts of throwing to the plate, but changed his mind. His throw to first, however, slipped out of his hand as Moccia was safe and the lead was cut to 2-1.

On the next play after Moccia stole second, Way popped an Imbriano offering up into shallow right field. Auld, playing first base, was backing up on the play. But DeLeary, coming over from second base, called off Auld but dropped the ball as the tying run scored.

After Way stole second, Lauria laced a two-run single to right field scoring Moccia and Way to give the Rams a 4-2 advantage which marked the end of Imbriano’s pitching performance.

With Chanley on to pitch, Brandon Devin singled to center field. After a fly ball to center field for the second out, Newton found the hole at shortstop with an RBI single to plate Lauria with the fifth run. A strikeout ended the frame but the damage was done.

Lynn Classical had one more base runner in the seventh inning as Lauria reached on a one out single to right field. But the Warriors turned a 4-6-3 double play to keep the score at 5-2 at the time.

Wakefield, which has come back several times this season, staged a rally in the bottom of the seventh as it continued to battle and didn’t give up.

Will Shea, a junior, sent a single up the middle to begin the inning. After a strikeout, Hurley lined a base hit to left field. An infield fly to shortstop resulted in the second out. Senior Matt Mercurio, who had two seventh inning home runs in the regular season, worked a walk to load the bases. Auld then laced a single to right field to score both Shea and Hurley to cut the lead to 5-4.

With runners on first and second, Guanci tapped a grounder to shortstop in a bid for his third hit of the day. Moccia, the shortstop, elected to go for the force at third base. Pinch-runner David Melanson, a junior, tried to beat out the throw. In his desperate attempt to do so, he stumbled over the bag and was tagged out by third baseman Devin to end the game.

“This team doesn’t quit,” said Forbes. “Dave tripped and lost his balance at third base. I don’t know if he would’ve been safe or not. But that is in hindsight now. We had a great season but this one stings.”