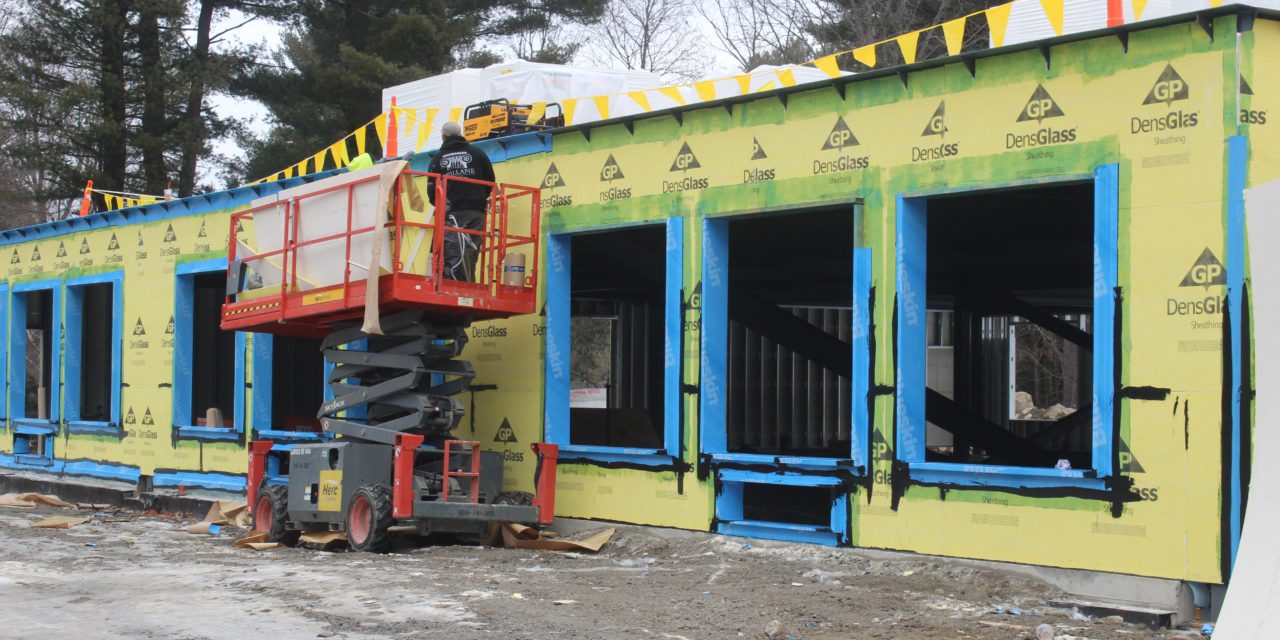 Town Administrator Rob Dolan said the additional funds will come out of the $18.75 million elementary schools’ expansion project’s contingency budget. The project is currently under budget, and SBC Chairman John Scenna is anticipating that $17,718,100 will be spent when the project is completed this summer.

Dolan said the $300,000 fields project entails constructing two softball fields behind Summer Street School. He also said the funds will be used to renovate an existing baseball field at Huckleberry Hill School that has fallen into a state of disrepair over the last decade.

“It’s an issue of equity and space,” said Dolan. “We want to promote youth softball because it’s a wonderful sport for girls to play in the spring, summer and fall.”

“We know that the softball program is a smaller league compared to the other sports in town, but the program has been growing over the last three years,” said Pavao. “We have 145 girls registered right now, and we only have two fields for the teams.”

Pavao noted that the Lynnfield High softball teams are frequently using the softball fields at the high school and Lynnfield Middle School during the week. She said the youth teams are only able to practice on Sunday mornings and occasionally on Saturday afternoons.

“We usually have 10 to 12 teams,” said Pavao. “It’s hard to help the girls develop when they only have one day to practice each week. We want to prepare the girls for the high school program. We have kindergarten parents complaining to us that they don’t get enough field time, and we told them we don’t have enough time available for the seventh- and eighth-graders. We want to have equity between the boys’ and girls’ programs.”

Dolan said the project’s contingency budget can afford constructing the two softball fields. He noted that the DPW will be building the fields.

DPW Director John Tomasz hopes to have the softball fields constructed before the season begins in April. He said the fields will include backstops, benches, fences and drainage systems.

School Building Committee member Jack Dahlstedt asked what type of grass will be planted for the fields.

In response to a question from School Building Committee member Jamie Hayman, Superintendent Kristen Vogel said Summer Street students will be able to use the softball fields during gym and recess.

“Students will be able to play a mean game of kickball out on those diamonds,” said Vogel.

“Lynnfield Youth Softball has done a tremendous job for the young girls playing softball,” said Sjoberg. “We have been working with Kelly in order to find field space so their teams can play. Anything we can do to increase space and capacity for these young girls is something the Recreation Department wholeheartedly supports.”

Scenna said the baseball field at Huckleberry Hill School will be renovated as well. He said the first- and second-graders playing Little League will be able to use the renovated field in addition to students.

“Lynnfield Little League will be able to use it as their own little complex,” said Scenna. “There will be ample parking because we are adding a significant amount of spaces at Huckleberry Hill School.”

Dolan said the new fields will “benefit the whole community.”

“These are reasonable additions,” said Dolan. “They are practical improvements to both campuses.”

“Softball deserves their own space,” said Dahlstedt. “The softball fields at Summer Street will give the youth softball program their own space. The renovated baseball field will benefit the younger kids.”

Dolan also noted both elementary schools will have “beautiful new playgrounds” once the project is finished.

Scenna said an additional $310,000 appropriated from the project’s contingency budget will be used to buy additional furniture, fixtures and equipment (FF&E) for the new classrooms and renovated classroom spaces.

“We originally took a bare-bones approach to the project,” said Scenna. “It originally only included furnishing the new classrooms. Based on the budget and the quotes we have received, we are going to be able to furnish the renovated preschool classrooms, tutoring spaces and specialized spaces. I know that has been a desire for school officials staff members.”

Vogel said $160,000 will be used to create STEAM (Science, Technology, Engineering, Art and Math) labs at both schools. She said the School Department will be purchasing coding, engineering and robotics materials for students to use in the labs.

“We want to give students the opportunity to think like a scientist,” said Vogel in an email sent to the Villager. “These classrooms will be focused on hands-on learning and will teach students how to problem solve, be creative and how to think curiously about science.”

Vogel said during the SBC meeting that adding the STEAM labs to both schools is a “fantastic opportunity” for students.

“Students will be able to explore whatever their interests might be,” said Vogel. “It’s a hands-on and active way for students to learn, which is something we want to do more of in classrooms.”

Dahlstedt inquired what types of furniture will be purchased with the remaining $150,000.

Tappé Architects Associate Jen Littlefield said the additional funds will be used to purchase teacher desks, filing cabinets and other items for the new additions and renovated classrooms.

In response to a question from Hayman, Scenna said the SBC is “not adding to the bottom line” by approving the fields project and allocating more funds for FF&E.

“Our goal is to give $1 million back to the town,” said Scenna.

Select Board Chairman Dick Dalton, who is a member of the SBC, asked if the project team was “comfortable” reducing the project’s contingency budget.

Tomasz said he was comfortable because the project’s change orders have been minimal.

“Based on how things are going, I would be surprised if we had to tap into the additional money we requested last year,” said Tomasz.

“The biggest risk we faced was getting out of the ground,” said Riefstahl. “We were really concerned about how much excess soil had to be removed or if we had to replace any contaminated soil, but that didn’t pan out. We saved a lot of money there.”

Scenna said the elementary schools’ expansion project remains on schedule. The project entails constructing two permanent additions containing five classrooms each onto both elementary schools in order to address increasing enrollment. Four traditional classrooms are being built at each school while the fifth classroom at each addition will be utilized as an individualized learning space.

“We are right now on target,” said Scenna. “Construction of the new gym at Huckleberry Hill School will begin during February break.”

Riefstahl recalled that Scenna and Dolan told general contractor Castagna Construction that the new additions need to be turned over to the town after April vacation.

“The contractor is being nimble with the schedule, and we are looking forward to April,” said Riefstahl. “While the contractor is doing their part, Educational Technology Director Stephanie Hoban has been ordering technology in order to outfit the rooms so they are ready for April. The superintendent and her team have been very busy selecting finishes and ordering furniture. We want to make sure we hit our deadlines.”