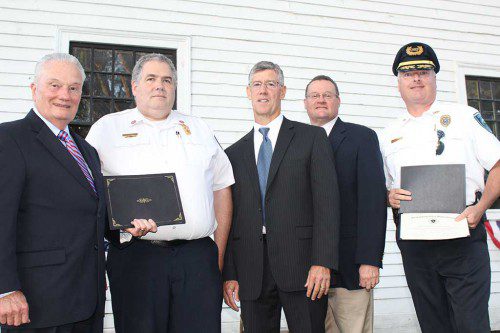 LYNNFIELD — Over 200 residents gathered on the Town Common to honor the town’s first responders during the Rotary Club’s inaugural First Responders Day, Sept. 13.

“This event spawned from the Lynnfield Rotary Club about five or six weeks ago because we were thinking of doing a fall event to replace our Rotary Barbecue that we did for 50 years,” said Kimball. “With the recent attacks on police, we thought it would be a great idea to put on a First Responders Day to honor our police, fire and EMS as well as remember 9/11.”

Kimball noted it’s been 15 years since the Sept. 11, 2001 terrorist attacks and said high school freshmen “were not alive” when the attacks took place.

“We cannot let that horrible tragedy fall to the wayside,” said Kimball.

Kimball led the event’s attendees through the Pledge of Allegiance. He thanked the sponsors of First Responders Day and thanked the town for allocating funds to purchase small American flags that were handed out to local children as well as a banner that was hung across South Common Street.

“For those of us who lived through 9/11, you know its one of those days you will never forget,” said Tetreault. “You knew when the second plane hit the World Trade Center that our world changed forever. On that fateful day, 343 New York City firefighters gave their lives in service to the city. Three hundred and forty three firefighters is difficult to get your mind wrapped around — all of those fathers, sons and brothers. But those firefighters didn’t look at themselves as heroes. They knew they had to go to work and had a job to do.”

Tetreault said, “firefighting is a calling” and said the town’s firefighters and EMS personnel are dedicated to their profession.

“In Lynnfield, we have a combination career and call fire department,” said Tetreault. “Many of our firefighters have professional careers as builders, radiation technicians, executives and computer programmers just to name a few. But if you ask any of them what they do for work, they will proudly say ‘I am a firefighter.’ No one thinks that the next call they go to will be their last and no one thinks they are a hero. We just love what we do. It’s hard for people who are not firefighters to understand why we do it. It’s a passion. We go into burning buildings and we treat the sick and injured. We push away Thanksgiving dinner just to go to an emergency. The reward is when you make a difference and help someone through the worst day of their life.”

In closing, Tetreault thanked the 200 townspeople who came out to support First Responders Day.

“We appreciate everything the community does for us,” said Tetreault.

After Tetreault concluded his remarks and was given a round of applause, Kimball presented the fire chief with a $1,900 check that will be donated to the Town of Lynnfield Rescue Fund, which supports the fire department.

“Jason called me six weeks ago to let me know he was planning this event and I did not think it was possible in the short amount of time to pull it off,” said Breen. “Kudos to Jason, all of the members of Rotary, the sponsors and the dignitaries who have made this a very successful event. To have this many people here in a short amount of time is very impressive.”

Breen recalled how he watched the events of Sept. 11 unfold after working a midnight shift. He noted Lynnfield resident and former Boston Bruins star Garnet “Ace” Bailey and Lynnfield native Sean Patrick Lynch lost their lives on Sept. 11 at the World Trade Center.

“When it strikes so close to home, it really has an impact,” said Breen. “It was a sad time and the world changed. This country has changed.”

Over the course of Breen’s 32 years working in law enforcement, he said he has “never seen a more challenging time for law enforcement as I have in the past year.”

“It has been very difficult for law enforcement to work in this type of environment,” said Breen. “But it’s extremely gratifying to know that we have this many people come forward to show solidarity to law enforcement and the fire department as well.”

After Breen concluded his remarks, he was given a round of applause. Kimball presented the police chief with a $1,900 check that will be donated to the Lynnfield Police Association.

Selectman Chris Barrett served as the keynote speaker for First Responders Day. He thanked everyone for coming to First Responders Day and also thanked the Rotary Club, particularly Kimball, for “stepping up to honor one of our town’s greatest treasures: Our men and women in uniform.”

“It is truly fitting that we hold this event on our historic Town Common, directly across hallowed ground, the Old Burying Ground,” said Barrett. “It’s the final resting place for so many heroes who came before us like Daniel Townsend, who stopped at this very location on his way to become one of our very first responders who answered the call to defend liberty at the start of the Revolutionary War in 1775.”

Since the town was founded, Barrett said, “the town of Lynnfield has been blessed with an abundance of heroes.”

“They are always ready and willing to serve, protect and defend our loved ones in our community, and our cherished way of life,” said Barrett. “The 15th anniversary of Sept. 11 was a vivid reminder of the heroic efforts of our first responders. On Sept. 11, people bet against America and people found out quickly they bet wrong. It was our first responders who lifted up a nation and demonstrated to the world once again why the National Anthem can proudly proclaim that this nation and really this very community, is home of the brave.”

Barrett said, “all too often, people look to the wrong places to find our heroes.”

“All we really need to do is look in our community to find many heroes living among us,” Barrett continued. “Our first responders, our military and the men and women in uniform are always ready to leave their loved ones at a moment’s notice to comfort and protect all of us. These men and women serve with great humility and never look for gratitude but are always ready to lend a helping hand and answer the call of duty. In this troubled world, we must always remember that in our darkest moments, its our first responders who light the way to give us hope in our times of need.”

“In the five years I was gone, I can tell you how much better police, fire and military are working together to protect the people of the commonwealth,” said McMurray.

After McMurray concluded his remarks, Rev. Bacon gave the benediction.

In closing, Kimball thanked everyone for coming to First Responders Day.

“It’s very important that we stand in solidarity with our first responders,” said Kimball. “They are the people we need most in our time of most need.”

After the ceremony concluded, the 200 attendees were treated to a free barbecue catered by Countryside Deli.