Townies B team blanked by Woburn 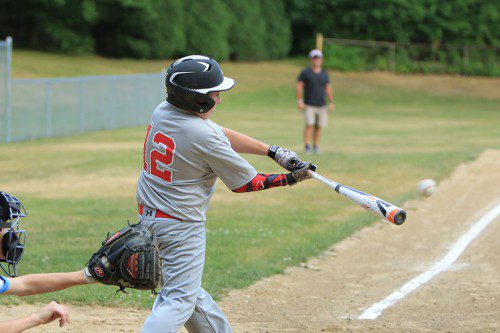 SCOTT ELWELL swings away at a pitch during a recent Lou Tompkins All Star Baseball League game for the Wakefield Townies B team. Wakefield was blanked by Woburn, 6-0, last night in B Division contest at Sullivan Park. (Donna Larsson File Photo)

WAKEFIELD — The Wakefield Townies B team hosted Woburn last night but was stymied by the heat thrown by Woburn pitcher Jacob Perez as it dropped a 6-0 game in a B Division contest in the Lou Tompkins All Star Baseball League last night at Sullivan Park.

“We just couldn’t adjust to his speed. We were kind of afraid of him at first because we thought he was throwing fast,” said right fielder Lucas Smith.

Woburn got its first run in the top of the second inning when leadoff batter Perez beat out an infield single and then moved to second when Wakefield pitcher Jack Ryan attempted to pick him off. The throw went into foul territory for an error, putting Perez at second. Nick Coviello and Aiden Vining followed with consecutive walks to load the bases. A wild pitch brought Perez home with Woburn’s first run. But Ryan struck out the next two batters before giving up a walk to John Kyle to reload the bases.

Chris Alden took over for Ryan and struck out Tom Krol to end the inning.

Wakefield posted its biggest offensive threat in the bottom of the inning. Alden led off with a single to center and then Brogan Chambers was hit by a pitch. Both runners advanced on a wild pitch and then Smith walked to load the bases. But Woburn’s Perez got the next three batters to end the threat.

Woburn extended its lead in the third inning with three more runs.

Zack Willis had a one-out single that ticked off the glove of pitcher Alden and wound up being fielded by second baseman Scott Elwell. Though no play could be made, Elwell made a valiant attempt anyway but his throw went wide of first for an error placing Willis at second. Cataro Shimada walked and then  Perez hit a dribbler down the first base line that stayed on the chalk for a single to load the bases. Nick Coviello grounded to shortstop Ryan Donald who positioned himself to make a throw to first before being called off by coach Brian McGonagle, who told him to throw home for the force. Donald threw home but the delay made the throw late and Willis scored to make it 2-0 with McGonagle apologizing to his shortstop for the confusion.

Woburn added another run in the top of the fourth inning. With one out Carter Walsh singled and moved to second and then third on wild pitches. Willis struck out for the second out, but Shimada reached on an error that scored Walsh but that would be all of the scoring for the inning.

Woburn got its final run in the top of the sixth inning. Walsh drew a one out walk and then Willis tripled down to right field line to bring in Walsh with Woburn’s sixth and final run.

“Once we saw him a few times we saw he was throwing pretty hard so we adjust,” said Smith.

The loss resulted in Wakefield falling to 4-8 on the season. The Townies had won two games in a row prior to last night’s defeat. Wakefield beat Reading 10-5 on Thursday night at Washington Park and Dover-Sherborn on Saturday by a 4-3 tally at Jameson Field.

The other two Wakefield wins were against Wellesley by an 8-5 score on Saturday, June 25 at Sprague Field and Stoneham by a 4-2 score on Wednesday, June 29 at Sullivan.

The Townies are off until Saturday when they host Dover-Sherborn at 5 p.m. at Sullivan Park.