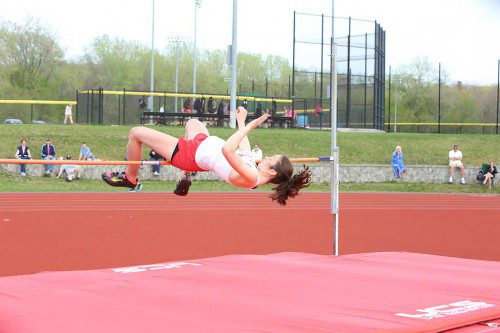 STATE SILVER medalist Haley Moss is one of the Melrose track stars to advance to this weekend’s All State Meet at Westfield College. Moss took second at the Div. 3 State Finals on Saturday in the high jump. (Donna Larsson photo)

MELROSE — It was strong showing for the MHS outdoor track teams on Saturday, May 28 at the Div. 3 State Finals at Burlington High. The Melrose girls’ team took home three medals, including silvers earned by runner Liz Hirsch and high jumper Haley Moss plus a bronze medal by Melrose long-jumper Anne Morrison. The trio led the day for the Lady Raiders, earning state medalist honors and helping Melrose capture 12th spot among all Div. 3 statewide competition, besting Middlesex League competition. Their medals ensure their place among overall statewide competition this Saturday at Westfield State at the MIAA All State Championship.

“They performed unbelievable,” said girls’ head coach Trevor Rudolph. “The heat was terrible and other athletes around them were dropping out from it. For our girls to perform as well as they did makes me proud.”

On the boys’ side junior Kevin Wheelock led Melrose with a fourth place finish in the two mile (10:03.93) and Sean Conlan was fifth in the 800 meter. Head coach Tim Morris confirms that Conlan’s time was a personal best. “He performed really well, Kevin also. Steven Abbot jumped over 20 feet in the long jump. And we were fortunate to have some solid results in the high jump to behind Nick [Chan] and Liam [Rittenburg].”

Freshman Issac Seide gave statewide notice of his potential in the 100 meter dash. His time of 11.55 put him in 12th place among 67 entrants. Also representing Melrose on the boys’ side were Steven Abbott in the 200 (21st), Joe Brach in the 400 (22nd) Liam Rittenburg and Nick Chan in the high jump, Rittenburg in the 200 dash, Steven Abbott in the long jump (17th), Nick Chan in the triple jump (18th) and Jon Lavina in the 400 dash. Collectively they helped Melrose secure a 21st team placement.

Silver medalist Elizabeth Hirsch placed second in the two mile run (11:33.90) just three seconds behind winner Abigail Long of Bishop Feenan (11:30.08) for a silver medal, good enough to advance her to All States. Teammate Haley Moss also earned a silver medal with a 5’2″ jump, earning 8 points behind her closest rival, Madison Ward of Holliston, who topped the contingent with 10 points. Melrose’s Ann Morrison took the bronze medal with a jump of 17-5, for six points, just shy of winner Saige Tudisco of Pentucket (17-8). All three will represent Melrose on Saturday. According to their coach, the three were unbeatable in their regular season and have great futures ahead of them. “Liz, I believe, is going to run for McGill University, and Haley may compete at Worcester State. Ann returns next season and she’s already being watched by Div.1 schools. The sky is the limit.”

Morrison was able to secure the most points in the Middlesex League this season, thus she has been named League MVP for her efforts. Said her proud coach, “When you contribute more you are more valued, and she does it all.”

While the season comes to an end for most of these Red Raiders, Hirsch, Moss and Morrison will survive another day. Both Melrose teams can look forward to continued success- many of their top talent will return next season, including the boys team’s powerful distance runners.