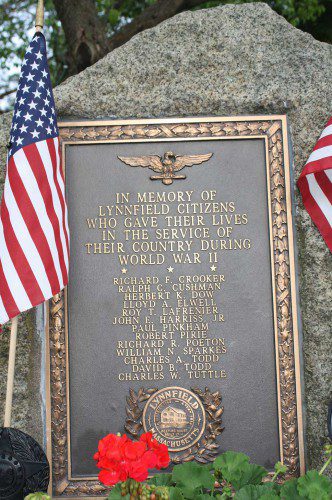 A MEMORIAL stone inlaid with a bronze plaque on the town common acknowledges the ultimate sacrifice given by 13 Lynnfield citizens in service to their country during World War II. (Maureen Doherty Photo)

LYNNFIELD — This year’s Memorial Day parade and celebration honoring those who gave the ultimate sacrifice in service to their country will be held on Monday, May 30.

The parade will muster in the parking lot of Our Lady of Assumption Church, at Salem and Grove streets, at 8:15 a.m.

Once assembled, the parade will march to the South Burying Ground on Salem Street and then to the Willow Cemetery on Summer Street.  Ceremonies will be conducted at each location. The parade will then return to the South Lynnfield Fire Station for a brief recess.

The parade will reassemble at Lynnfield Middle School, 505 Main St., at 10 a.m. and will march to the West Burying Ground and Old Burying Ground near the town common and then to Forest Hill Cemetery on Forest Hill Avenue. Ceremonies will be conducted at each cemetery.

The parade will then march to the common for final ceremonies to begin at approximately 11 a.m.

“Our celebration will include music and a cookout at the conclusion of our ceremonies on the common,” said Veterans’ Services Officer Bruce Siegel, who will also serve as parade marshal.

“All veterans and residents are encouraged to participate in some or all of the activities. Please consider joining your fellow residents and veterans along the parade route or on the common in honor of this special day,” Siegel said.

All activities should be concluded by 1 p.m.

In case of heavy rain, the ceremonies will be held in the Middle School auditorium at 11 a.m.

“If you are interested in making a donation to the town’s local veterans, Lynnfield’s own American Legion Post 131 will be on site and donations may be made to them after the ceremony,” added Siegel.

For additional information, please call Siegel at 781-334-9440 or send him an email to: [email protected]