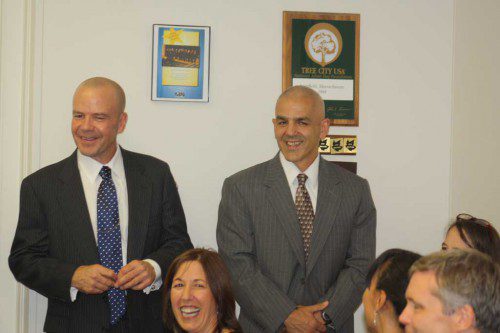 A full house of relatives, friends and colleagues of the officers gathered at Town Hall July 13 when their appointments were made official by the Board of Selectmen.

Chief Breen spoke highly of both men as he gave an overview of their accomplishments.

In recommending Johnson to the rank of permanent captain, Breen said, “Karl Johnson became a member of the Lynnfield Police Department on April 23, 2002. He was promoted to sergeant on Dec. 23, 2005 and provisional captain and executive officer on Dec. 5, 2010.”

Breen added, “He is the acting chief when I am on vacation. He received a score of 93 on the Civil Service captain’s exam. Capt. Johnson is highly respected within the department and has already performed many of the duties as a provisional captain over the years.”

Scotina, Breen said, “officially began working for the Lynnfield Police Department on October 8, 2012. He transferred from the Peabody Police Department where he was a training officer and a NEMLAC–SWAT team member. He quickly assumed both jobs in the department. He received the highest score on the civil service sergeant’s exam with a score of 90. Officer Scotina is also highly respected within the department and in my opinion is a great choice for our next sergeant.”

Crawford congratulated both men for the work they do on behalf of the town, adding that their promotions were “very much deserved.”

Terranova said Johnson would be filling some big shoes when the ‘big guy’ is not around.

Referencing Sgt. Scotina’s transfer from Peabody nearly three years ago, Terranova said “it was a steal of a lifetime; a great addition to the town and I know you will keep our streets safe.”

Barrett said that Chief Breen’s “praise was warranted” for both officers and he believes them to be “two excellent picks” for promotions.