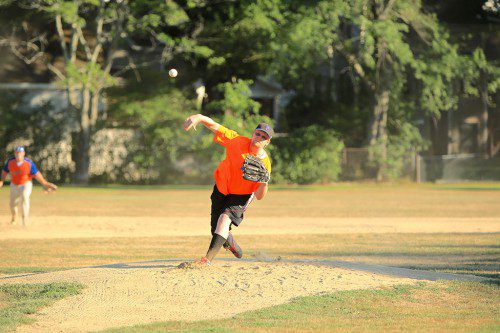 TOM CARON, a right-hander, pitched a good game and kept the High Life off-balance as he surrendered just two runs on eight hits in four and third innings of the Unknows 7-3 triumph in Game 3 of the best-of-three Twi League semifinal game last night at Moulton Field. (Donna Larsson File Photo)

WAKEFIELD — The semifinal round of the Twi League playoffs between the top-seeded High Life and the fourth-seeded Unknowns concluded with the decisive Game 3 of the best-of-three series on Monday night at Moulton Field that went in favor of the underdog with the Unknowns knocking out the High Life, 7-3.
The game was delayed at the start by about 20 minutes due to the late arrival by both umpires.
Game 1 winner Nick Dettorre got the ball for the High Life once again but this time he took the loss going 6 plus innings allowing five runs on nine hits.
The Unknowns sent game 1 starter Tom Caron back out again for the rubber game and he came up with a big time performance keeping the High Life hitters off-balance and off the scoreboard.
Caron pitched into the fifth inning officially going four and a third, allowing just two runs on eight hits. Remarkably, the first 10 outs Caron recorded in the game were via groundout.
The Unknowns threatened to score in the first, but failed. They had back-to-back one out singles by Geoff Eriksen and Chad Dwyer, but a grounder to third by Graham Robertson resulted in an inning ending double play.
There was no score until the top of the third when the Unknowns pushed a run across. The inning started well for the High Life with a pop up to first base and a strikeout, but Eriksen tripled with two outs and Dwyer singled to bring him home.
Anthony Caracciolo got the first hit for the High Life with a leadoff single in the bottom of the third inning. His teammates couldn’t move him around and the inning ended without a run.
The Unknowns broke it open in the top of the fourth, plating four runs on five hits and jumping out to a 5-0 lead.
Brendon Cobb singled to lead things off then scored when Bryan Butt tripled to left. Next up, Kevin Murray doubled home Butt and it was 3-0. Caron was up next and worked a walk, then Brandon Panarese singled to load the bases. A sac-fly by Geoff Eriksen and an RBI single by Dwyer plated two more runs.
The High Life got on the board with a run in the bottom of the fourth, but they would have liked to have had more.
Jason Federico led off with a double then moved to third on a wild pitch. Matt Davis singled him home to make it 5-1. Next up, Mark Sullivan bounced one to the second baseman. The flip to the shortstop covering the bag retired Davis for the first out, but there was no chance to double up the speedy Sullivan. Caron then struck out the next two batters to end the inning.
Dettorre worked around a two out walk in the fifth to escape without allowing any more runs to come in.
The High Life had their big chance to come back in the fifth inning as they got a run back with Caracciolo smacking a leadoff double and Tom Sheeran singling him home. Next, Dettorre walked, and after a fly out to left field, Federico walked to load the bases with one out.
Caron exited the game at that point and Adam Chanley came in to face Davis. The move worked out for the Unknowns as Chanley got Davis to pop up on the infield. He then got Sullivan to fly out to left and end the threat without any more runs coming home.
Heading into the top of the sixth, the Unknowns held a 5-2 lead and despite getting a hit and a walk and sending up five batters, didn’t add to their lead with any runs.
The High Life also had a chance go by the wayside as they squandered a pair of one out singles by Eric DiTonno and Caracciolo, as Chanley got a pair of strikeouts.
The Unknowns tacked on a pair of runs in their half of the seventh. Cobb led off with a triple and knocked Dettorre out of the game. Doyle came in to pitch from shortstop and Dettorre went to second base.
The first batter to face Doyle struck out. Murray was up next and he turned a Doyle fastball around for an RBI triple to score Cobb.
After Doyle struck out another batter, this time looking, Jeff Power pinch hit for Sean Alexander. The veteran Twi-Leaguer blooped a pop up into shallow right field. Dettorre got under it, but couldn’t secure the out and Murray came home from third to make it 7-2.
As the sun went down, the High Life got one last chance to hit. Doyle started the inning off with a single and eventually came around to score a run. The Life loaded the bases, but were unable to come up with a clutch hit as a two out grounder to Eriksen at shortstop resulted in the final out.
Game 3 went to the Unknowns, 7-3. They won the best-of-three semifinal series 2-1 and will face the winner of Game 3 of the other best-of-three semifinal series between the Expos and the Brewers. That rubber game will be held at Moulton Field on Tuesday at 5:45 p.m.
The schedule for the Twi League best-of-five final is out. Game 1 is scheduled for Wednesday night at 5:30 p.m. at Moulton with Game 2 scheduled for Thursday night at 5:30 p.m. at Moulton.
After two off days, Game 3 is scheduled for Sunday at Moulton, most likely at 5 p.m.
Games 4 and 5 (if necessary) will be played next Monday, Aug. 15 and Wednesday, Aug. 17 at 5:30 p.m. at Moulton.