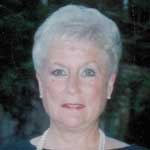 TOPSFIELD — Virginia (Lund) Carisella Upton of Topsfield and formerly of Wakefield departed this world on Friday, May 1.

Ginny began her working career at the Shawmut Bank in 1957. Her starting position was that of a clerk. She enjoyed a 30-plus year career and aspired to senior loan officer and Bank vice president.

Ginny chose to return to the workplace two years after retirement where she worked for years at Fram Corporation in Reading. Ginny moved to Topsfield where she lived for six years with her daughter Donna Page.

Ginny passed quietly and in peace.

A Memorial Service celebrating Ginny’s life is scheduled to begin at 11:30 a.m. on Monday, June 8, at the St. Florence Church, 47 Butler Ave., Wakefield.

Family and friends will gather for lunch and remembrance following the Memorial Service.