Volleyball team off to 2-0 start 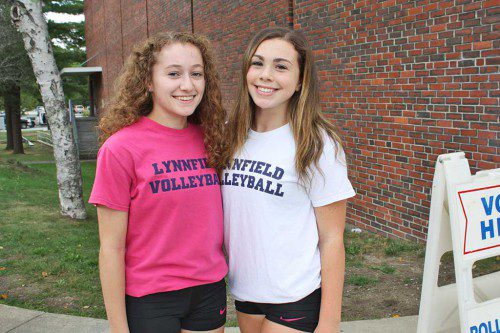 LYNNFIELD — The volleyball team returned to the court last week and has begun its quest to defend its Division 3 North sectional championship.

With a strong nucleus returning this season, Lynnfield head coach Michelle Perrone said the Pioneers are poised to have another strong season.

“I am excited for the talent and skills the juniors will be bringing to the team this year,” said Perrone. “They are a hard working group who will provide the needed talent necessary to fill out our roster. The sophomores and freshmen are also looking strong and it’s apparent that they have been working on improving their skills during the off-season and summer.”

Perrone said the locals will be looking to win its sixth straight CAL title and seventh straight Division 3 North championship this fall.

“The team, as a whole, hopes to maintain our status as a well-rounded volleyball program,” said Perrone. “Through the efforts of all of our players, we would like to find ourselves back in the run for a league title, D-3 North title and a D-3 championship. With some hard work and perseverance, I do think that this group of student-athletes has the skill and drive to reach the goals they set for themselves as individuals as well as achieving our team goals.”

Senior captains Olivia Pascucci and Rebecca Albanese will be leading the Pioneers this fall. Pascucci is an outside hitter and Albanese is a libero.

“We will look to both Olivia and Rebecca to continue their successful volleyball careers as captains of the 2016 team,” said Perrone. “Both will help drive our offense and our defense and, with their experience, they will help lead the team both on and off the court along with our other seniors.”

In addition to the returning seniors, the locals have welcomed several promising newcomers this fall. Freshman Melissa Morelli will be splitting time between setter and right-side hitter. Perrone said junior Maxine Boyle “will help anchor the middle hitter position.”

The Pioneers opened the season crushing Georgetown 3-0 on Sept. 7.

Lynnfield prevented the Royals from reaching 10 points in each set. The locals defeated Georgetown 25-4 in the first set. The Pioneers defeated the Royals 25-7 in the second set. In the third set, the locals prevailed 25-9.

Nugent led the Pioneers with eight kills and four aces. Morelli had 11 assists and five aces.