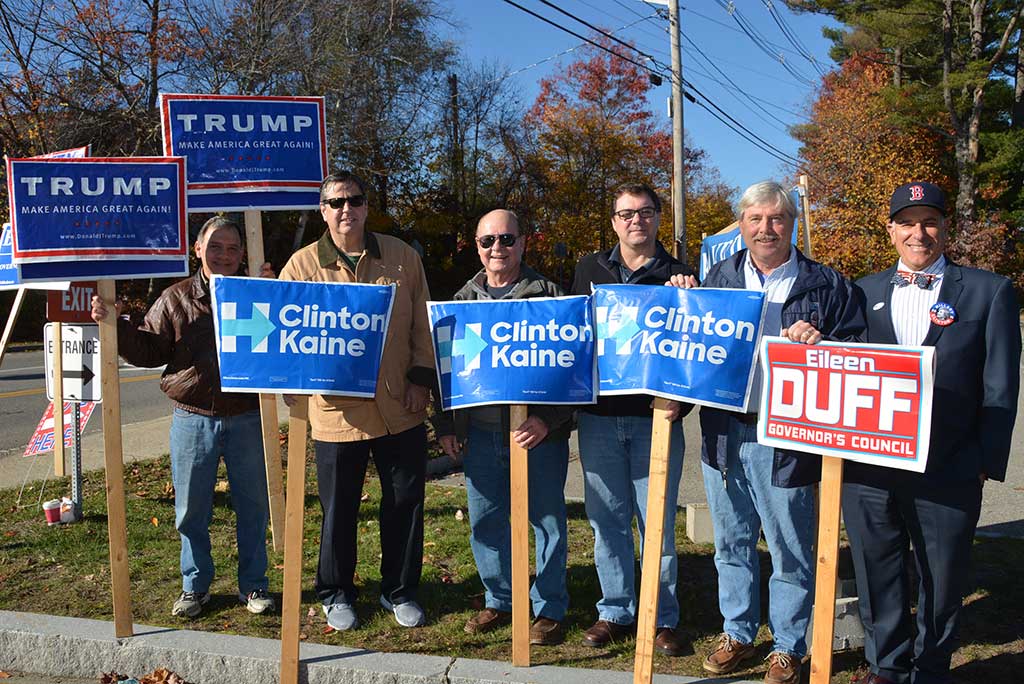 NORTH READING — Voters finally got the last word in 2016’s historically bitter and divisive presidential election, which went into the wee hours of the morning on Wednesday before being called in favor of Republican Donald Trump. Hillary Clinton carried reliably Democratic Massachusetts and voters also decided the fate of four controversial ballot questions, including charter schools and recreational marijuana use.

Clinton carried North Reading, which has a recent history of voting Republican in presidential contests, by a slim margin of 297 votes but saw her hopes of becoming the nation’s first woman president collapse in the early hours of Wednesday morning as swing state after swing state fell into the Donald Trump column.

On the four ballot questions, North Reading voters gave thumbs down to the legalized recreational use of marijuana but thumbs up to more humane conditions for the raising of farm animals. They opted against expanding the cap on charter schools by a wide margin and also nixed expanding gambling with an additional slots parlor.

Overall, 9,154 North Reading voters cast ballots, an 81 percent participation rate, about one percent higher than 2012. This includes the 31 percent (3,498) of voters who cast their ballots early. Their ballots were opened in plain view at  the polls on Tuesday and fed into the voting machines during the day.

The early voting clearly helped keep election day traffic manageable on Route 62 all day as well as in the parking lot at St. Theresa Church, where the entire town votes. Four years ago traffic on Route 62 was backed up well past the Flint Memorial Library during the rush hours. Poll workers said voters were lined up at the doors waiting to get in at 6:30 a.m. half an hour before the polls opened and voting was steady and heavy all day long.

Volunteers for both campaigns held signs for the candidates throughout election day. One of those holding a Clinton sign, Steve O’Leary, said after the election: “In light of the results, I feel somewhat heartened. Our town, our state and our country went for Hillary. Unfortunately, our Electoral College appears to more closely resemble Trump University rather than Harvard. We occasionally get duped yet we will survive the feeling of having been robbed.”

Another one of the sign holders, Jeff Yull, a Trump supporter, had a different opinion: “I’m glad to see the American people rose and made their voices heard. Many have felt disenfranchised by the last eight years or so. I can only hope President–Elect Trump fulfills his promises and works with Democrats to bring us together.”

In other ballot races, Sixth District Congressman Seth Moulton, a Democrat, had no opposition for re–election to another term and pulled 6,220 votes (68 percent). There were 2,856 blanks and 78 write–ins.

Republican challenger Richard Baker topped Democrat Eileen Duff for Governors Council, Fifth District, in the local vote. Baker finished with 4,096 votes here, versus 3,727. There were 1,330 blanks and one write in.

Local resident State Rep. Brad Jones Jr. was unopposed for another term in the House of Representatives and polled 77 percent of the vote here, 7013 votes. There were 2,113 blanks and 28 write–ins.

For Middlesex Sheriff, Democrat Peter Koutoujian had no opposition of the ballot and won 5,793 votes here. There was a write–in effort by Angelo LaCivita that netted 46 write–ins.

All seats on the Northeast Metropolitan Regional Vocational School were on the ballot for election or re–election. North Reading’s School Committee representative, Judy Dyment, had no opposition and was re–elected with 5,890 votes. There were 3,245 blanks and 19 write–ins.

The four ballot questions were also controversial and accounted for much of the political advertising on Bay State television channels in the weeks leading up to the election.

On the question of whether to expand gambling in Massachusetts by authorizing the state Gaming Commission to license one additional slots parlor, North Reading voted No. The nays had it, 5,075 to 3,493 with 586 blanks.

The question of whether to lift the state cap on charter schools and allow up to 12 new charter schools per year was was a heavily contested campaign issue. Locally, voters opted against lifting the cap, 5,796 to 3,183, a 63 – 35 percent margin with 175 blanks. The question was soundly defeated in all four precincts with margins approaching 2 to 1.

On the question of whether to require more humane treatment of farm animals, voters said Yes, 7,063 to 1,899. When the law takes effect, it will require animals raised for food to be allowed enough space to turn around, stand up or lie down or to spread their wings.

While Question 4 passed statewide, the marijuana legalization ballot question went up in smoke here. Voters in North Reading listened to law enforcement officials and youth services advocates and voted against legalization, 4,865 to 4,168, a 53–46 percent margin, with 121 blanks.