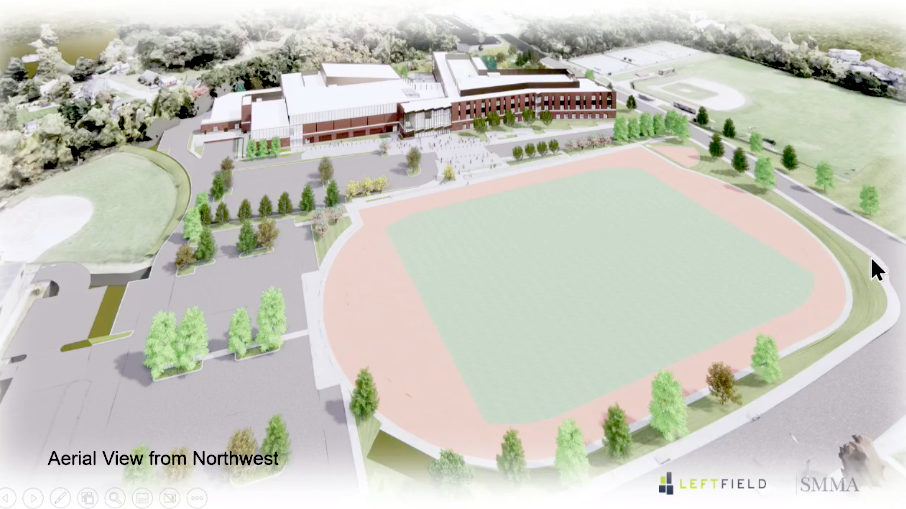 AN ARTIST’S RENDERING of the planned new Wakefield Memorial High School viewed from Farm Street. The new school would be built on the current site of the Shaun F. Beasley Track & Field. The track and field would be re-built where the old high school currently sits.

WAKEFIELD — Last night’s public forum was the eighth such meeting on the planned new Wakefield Memorial High School and it included a review of the site, building design and layout along with a breakdown of how the cost would be split between the town and the Massachusetts School Building Authority (MSBA).

The estimated cost figure for a new high school that has been shared to date has been about $220 million. Last night, Lynn Stapleton of LEFTFIELD, the Owner’s Project Manager, confirmed that the MSBA would reimburse the town for just over 26 percent of that cost. The remaining nearly 74 percent would be borne by the town.

Based strictly on “eligible” costs, the MSBA reimbursement rate would be about 53.44 percent, Stapleton said. But due to the spaces and items in the new high school design that exceed or fall outside of MSBA eligibility guidelines, the town can expect only about 26 percent reimbursement for the total cost of the project.

Last night’s session began with a look at plans for the overall site presented by the design team at SMMA Architects. Civil engineer Erin Prestileo and Landscape Architect Meghan Collins reviewed various elements of the site design, followed by a review of the exterior and interior plans for the new building.

Architect Brian Black of said that the planned new high school would consist of 260,000 square feet on three levels, which he described as “quite a large school.”

The exterior design features mainly brick masonry, Black said, with metal panel accents. The base of the building would be granite. The exterior breaks down to 75 percent opaque walls and 25 percent glass windows.

Black also discussed the interior materials such as linoleum, terrazzo, carpet and polished concrete for the flooring, and tile and wood paneling for the walls.

He said that academic areas would be concentrated in the southern half of the building. He added that the layout of the school was designed to make it easy to navigate and share resources.

Black displayed the interior layouts for each of the three levels.

Black displayed artist’s renderings of each interior area of the school.

He said that the school was being designed for energy efficiency and high sustainability. Infrastructure for solar panels will be placed on the roof.

Stapleton said that she expects the project to be on the MSBA’s agenda for approval in December, followed by a town vote in January.

If the town approves the project, the design development phase would follow with construction beginning in the spring of 2024, Stapleton said. The schedule calls for the school to open in the fall of 2026, followed by the demolition of the old building and the construction of a new track and field on the old building site. Full project completion would be in 2027.

There were a number of questions from the public.

Mike Scola asked about the number of off-street parking spaces that would be provided compared to the present.

Prestileo said that 330 off-street parking spaces would be provided at the new school, compared to the current 269.

Marcy McCauley asked about how the high school project and the simultaneous new Northeast Metro Tech construction would interact and co-exist.

Stapleton said that there have already been discussions with Northeast officials and she expected monthly meetings once the projects get underway.

Nahant Street resident Marie Oliveira had questions about traffic, particularly with both the high school and Northeast Metro Tech projects going on at the same time.

Stapleton said that she hoped that the vocational school would have their new access road in place further up on Farm Street to avoid both projects using Hemlock Road during construction.

Oliveira also asked about the individual taxpayer impact of the high school project. Stapleton said that information is available on the project web site and updated figures would be forthcoming shortly.

Mike Pearlman asked about the adaptability of the planned new school to future changes in education and technology.

Black described the ways in which the design’s flexibility would offer the ability to adapt to change.

Another question related to the cafeteria, which will have a full service kitchen. A separate culinary arts area will be on the second floor.

Marin Sander asked a question about the library/media center.

Black said that the media center would still have books as well as other media technologies, computers, video and audio stations. There will also be glass-enclosed group study areas.

The next public forum is scheduled for Oct. 18, when updated cost estimates will be presented.