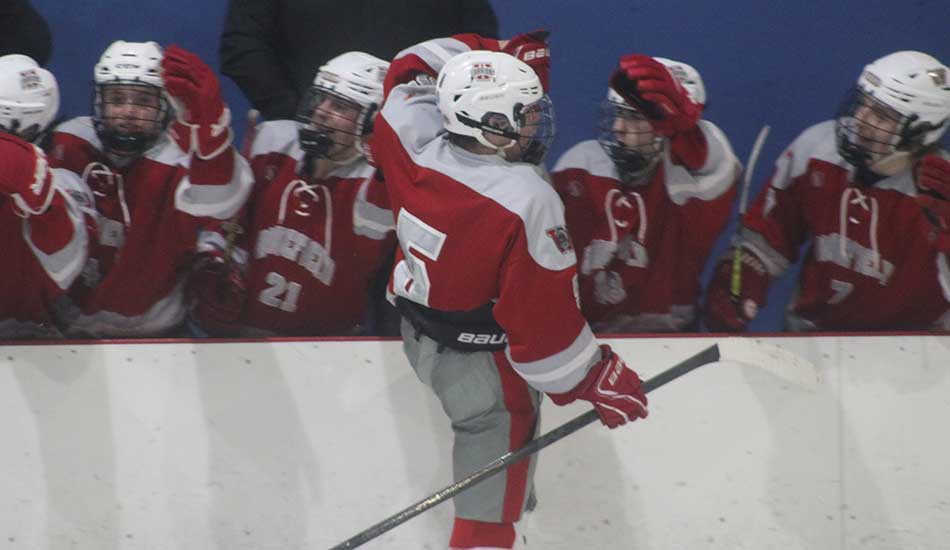 Junior captain Matt Elwell had a hat trick, senior captain Joey O’Brien tallied three assists and senior goalie Gabe Brissette turned away 17 shots to earn a shutout in his first start of the season as the Warriors improved to 3-3 overall.

“Just really proud of our leadership group,” said 3rd year head coach Mike Geary after the win. “We lost three in a row and have had some trouble scoring but they kept doing what we preach together as a team – especially playing good team defense. Matt Elwell and Gabe Brissette were terrific; those guys led the way along with our senior class.”

Playing in an electric environment, featuring a rowdy Wilmington student section decked out in pink to support Breast Cancer Awareness, the Warriors stayed the course through a scoreless 1st period before tallying three in a dominant 2nd period and one more in the 3rd to ice it.

“Elwell and O’Brien stood out on the scoresheet but we had a lot of other guys play really well for us to lead us to a balanced attack,” said Geary.

Wakefield stayed true to their full team defensive values in the 1st period and didn’t get frustrated despite a recent stretch of offensive struggles. The Warriors had scored just one goal in their last three games, losses to Arlington, Woburn and Watertown.

That drought continued seven minutes into the 2nd before junior defenseman Joe Colliton, assisted by O’Brien, emphatically opened the flood gates with an impressive top-shelf shot after a toe drag that went bar-down glove side to open the scoring.

That goal was followed up just 40 seconds later by Elwell’s first on a rebound off an O’Brien shot, the 2-0 lead quieting the home crowd and giving new life to a Warrior attack that was quickly finding its rhythm.

Wakefield outshot Wilmington 27-17 in this one, the majority of that difference coming in the 2nd as the Warriors peppered the Wildcat cage with 17 shots.

All the while, Brissette calmly squared up each Wilmington chance while Wakefield’s blue liners – especially the top pairing of Colliton and senior captain Evan Simoneau – made good scoring opportunities scarce for the Wildcats.

That defensive focus was especially evident on the penalty kill. Wilmington had two full power plays in this one, the first resulting in just one shot on net followed by only two in the next one. Wakefield’s top line of Elwell, O’Brien and junior Bobby DeFeo all provided heavy and relentless pressure on the PK while the defensemen, senior Matt Burns, sophomore Brian Purcell, junior John Regan and sophomore Liam McNeil in addition to Colliton and Simoneau continued their terrific play.

Wakefield ended the deciding 2nd period with their most impressive goal of the night. With only a minute left in the frame, O’Brien won a faceoff in the offensive zone and before the Wildcats could blink, DeFeo sent a perfect pass from outside the right dot back to Elwell in the slot who finished with a one-timer to make it 3-0.

While Brissette battled to complete his shutout in the 3rd, Elwell found his hat trick with a tip in front on a Burns shot from the point. Elwell celebrated by emptying all the arrows from the quiver as the Warriors took a big step in their hunt for a bid to the new statewide tournament in 2022.

“Our general team goal is to make a good run in the state tournament which we think we can accomplish,” said Geary. “It’s a little different this year with the statewide tournament but we want to make sure we are playing our best hockey towards tournament time.”

O’Brien, Simoneau and Elwell are tasked with setting the tone as captains for the Warriors this season. It’s always an important job but never more-so than when your team really needs a win. Wakefield needed one on Wednesday. The captains stepped up.

“This leadership group has been terrific so far,” said Geary. “O’Brien, Elwell and Simoneau have played a lot of hockey for us. They’ve really developed into good leaders that the younger guys can look up to.”

Those leaders will look to keep it going on Sunday against 0-5 Melrose, 12 p.m. at the Stoneham Arena. Wakefield then hosts 0-5 Burlington on Tuesday night, also in Stoneham at 8 p.m.

“It’s good for us to see the different things that lead to you to winning tight games as opposed to losing them like staying out of the penalty box and playing good team defense,” said Geary when asked how to keep the momentum going. “It’s nice to see them get rewarded for that.”