COVID, the Warrior logo and the Broadway crossing headlined the first half of 2021 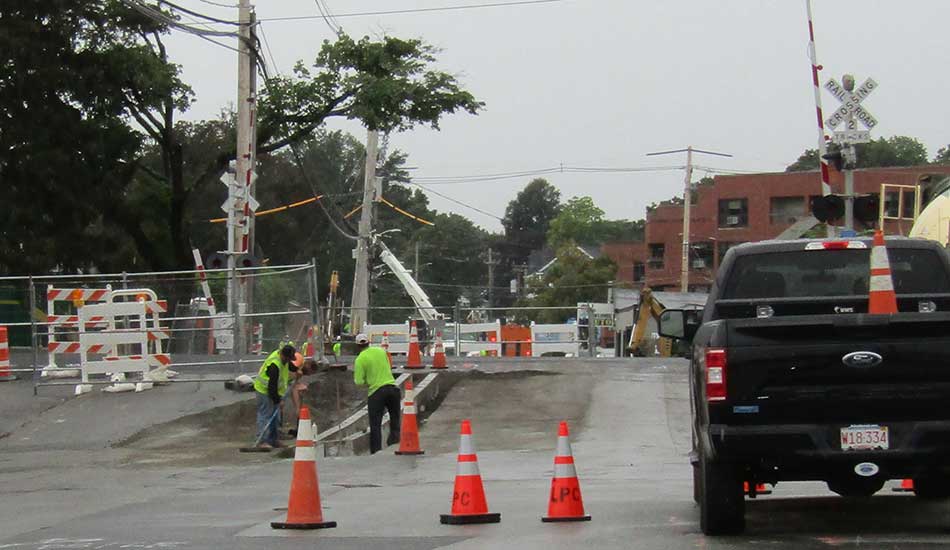 WAKEFIELD — The town continued to be at the mercy of a virus in the first half of 2021 as the town split into opposing camps over the Wakefield Warrior logo and the Broadway commuter rail crossing remained closed.

With rising case numbers, Wakefield Public Schools remained on a hybrid model of in-person and remote learning to start 2021.

In early January, the Wakefield Independence  Day Committee announced that the there would be no July Fourth Parade for the second year in a row. Citing lingering uncertainties due to COVID, the need to book bands and participants well in advance and a reluctance to ask struggling businesses and individuals for donations, the committee made the decision to nix the 2021 parade.

On Jan. 19, the town mourned the tragic death of Greenwood School speech therapist Pamela Wood, who was found murdered inside her Otis Street home. Her son, Timothy Martin, has been charged with murder. Martin allegedly charged police officers with a knife as they searched the home and was shot as a result. He survived.

In late January, the West Side Social Club announced that, like the Wakefield Independence day Committee, they would be canceling all of their July Fourth activities in 2021 due to COVID.

On Jan. 26, the Health Department announced that residents age 75 and older would be eligible for their first COVID-19 shots at a clinic on Feb. 1 at the former American Mutual/Comverse building at the head of the Lake.

In mid-February, the School Committee laid out a “process” to determine the fate of the Warrior logo and scheduled a public forum on the logo for Feb. 25.

The town learned in mid-February that its COVID case numbers were trending down.

The Zoning Board of Appeals was less than enthusiastic in mid-February when it heard plans  for a 56-unit 40B project on Crescent Street.

At its meeting on Feb. 22, the Town Council voted to place the Warrior logo question on the April Town Election ballot as a non-binding referendum after a citizens petition was filed asking that the question be placed on the ballot.

On Feb. 25, the School Committee held a public forum on the Warrior logo via Zoom.

In early March, the Town Election field began to take shape with contests for School Committee and Town Council drawing the most interest.

On March 17, the School Department presented a panel of Native American activists from around the state who were opposed to Indian imagery being used on school logos.

In late March, real estate development giant Cabot Cabot & Forbes filed plans with the town to construct a 485-unit residential complex at the head of the Lake on the vacant former site of American Mutual and Comverse Technologies at 200 Quannapowitt Parkway.

Also in late March, the Zoning Board of Appeals approved plans to build a new Santander Bank branch at the corner of Main and Richardson streets.

On April 1, Health Director Ruth Clay announced her plans to retire at the end of May.

On April 5, Hollywood came to Wakefield as director George Clooney and actor Ben Affleck brought a film crew to the Wakefield Bowladrome to film scenes for their movie, “The Tender Bar.”

Galvin Middle School principal Adam Colontuoni announced on April 7 that he would be leaving to take a school position in Salem.

The town helped Wakefield native Richard Bayrd celebrate his 92nd birthday with a car parade driving past his Yale Avenue home on April 8. Bayrd had served the town for decades as a constable and a member of the Board of Appeals.

In late April, the Zoning Board of Appeals got its first look at Cabot Cabot & Forbes proposal to build a 485-unit residential complex at the head of the Lake on Quannapowitt Parkway.

Town Meeting voters met in the field house at Wakefield Memorial High School and took just two hours on Saturday morning May 8 to deal with 15 articles on the Annual Town Meeting warrant, including over $110 million in spending.

In mid-May, the town Council reviewed two bids to operate the summer boat rental concession on the Common. The Boys & Girls Club of Stoneham & Wakefield submitted a proposal as did Boston Outdoor Recreation, which had run the boating operation for several years.

Megan Webb was named in mid-May as the new principal of the Galvin Middle School from a pool of 30 candidates for the position.

After being alerted by local photographer Joyce Wood, on May 20, a wildlife rescue team assisted by the Wakefield Fire Department and the DPW saved a mother swan who had a fishing lure stuck in her mouth and was unable to feed. The lure was removed and the swan was released uninjured to rejoin her brood of cygnets.

On May 24, the Town Council voted to award the boat rental concession on the Common to the Boys & Girls Club of Stoneham & Wakefield.

Memorial Day observances returned in-person at the West Side Social Club in the morning and on Veterans Memorial Common in the afternoon.

In early June, it was announced that Board of Health member Elaine Silva would serve as interim Health Director until a replacement for could be found for Ruth Clay, who retired at the end of May.

In mid-June, it was revealed that, despite promises of confidentiality, the School Department had released surveys on the Warrior logo after a resident filed a public records request.

As the summer of ‘21 began, the Broadway commuter rail crossing remained closed as the town and the FederaI Railroad Administration spent months trying to resolve Quiet Zone issues. In late June, the town expressed hope that it would be able to open the Broadway rail crossing by Labor Day.