Crescent Commons 40B approved by ZBA 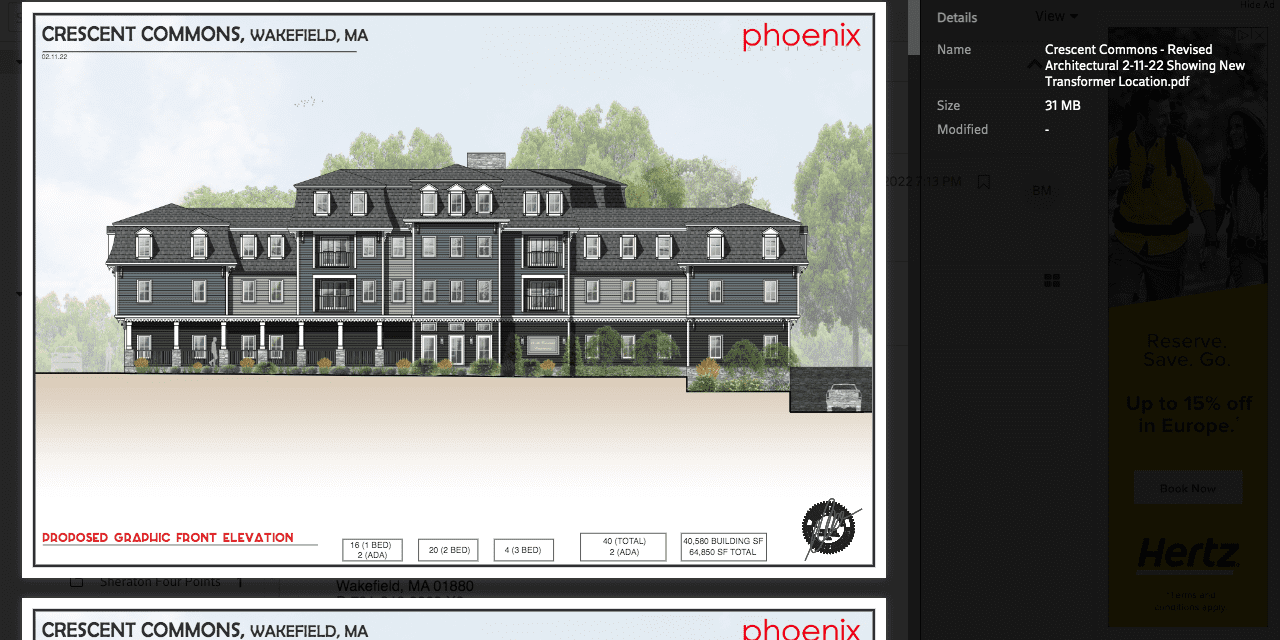 WAKEFIELD — The development known as Crescent Commons will move forward as a 40-unit, 40B affordable housing project after the Zoning Board of Appeals approved the project earlier this month.

The ZBA closed the public hearing and unanimously approved the project at its March 2 meeting. Board members had previously reviewed and discussed the draft decision to grant the comprehensive permit that will allow the project to go ahead.

The year-long process involved 12 public hearing sessions with the full Board of Appeals. The development team also met 16 times with a subcommittee consisting mainly of ZBA members Jim McBain and Ami Wall to try to work out details that would be acceptable to both the full board and the developer.

The developer, Crescent Commons LLC, is run by Joseph A. Boccelli and his son, Steven J. Boccelli.

The plan was originally proposed by attorney Brian McGrail on behalf of developer Stephen Boccelli in February 2021 as a 56-unit 40B rental project. It has been reduced in size and density several times in the course of the hearing process in response to feedback from the board and from the public. The final plan calls for 40 units.

The proposed site is in the General Residence zoning district. Currently on the site are three older two- and three-family homes at 44, 46 and 48 Crescent St. The combined land area of the site is 25,113 square feet. Twenty-five percent of the units in the proposed building will be affordable, but as rentals, Wakefield will get credit for all 40 units toward its affordable housing inventory.

It was a challenging project for both the ZBA and the developer and there were some bumps in the road during the year-long hearing process.

When the hearings on the project appeared to hit an impasse last spring, the ZBA assigned a subcommittee of Jim McBain and Ami Wall to work with the development team to try to resolve some of the issues with the size and design of the proposed building.

In June, the Zoning Board of Appeals brought in an affordable housing consultant to work with the town and the developer in an effort to resolve the issues. The board took advantage of a program offered by the Massachusetts Housing Partnership whereby a consultant works with the Zoning Board and the developer in negotiating comprehensive permits for 40B affordable housing projects. The Crescent Commons project was accepted into the program and Ezra Glenn was assigned as the consultant.

Last August, ZBA Chairman David Hatfield implored the developer to try to find some way to address the board’s and the neighbors’ concerns related to size, mass, parking and safety.

In October, McGrail noted that the development team had continued meeting with the ZBA subcommittee to work toward design modifications that would be palatable to the full board. He explained that in changing the architectural design to reduce the massing on the fourth floor, it was necessary to eliminate two more units on that floor.

McGrail said at the time that the modifications showed that his client was willing to invest the time and money necessary to come up with a workable plan.

By December, the Zoning Board of Appeals seemed to be mostly pleased with the revisions to the architectural plans. McBain said that over the 10 subcommittee meetings a lot of issues had been addressed and resolved. Board members observed that the latest architectural plan, which incorporated Victorian elements, made the proposed building look more like it belonged in the neighborhood.

After the ZBA’s unanimous vote on March 2 to approve the project, Boccelli thanked the board, especially subcommittee members Wall and McBain. McGrail also expressed his appreciation to the board, town officials and neighbors for their input throughout the process.

“We can all agree that it’s a better project than what was originally proposed,” McGrail said.

Once begun, construction is expected to take about a year and a half.