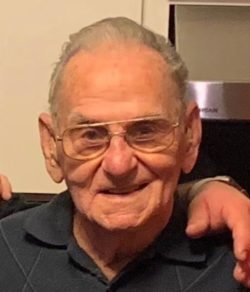 He was born in Wakefield on December 15, 1924 and was the son of the late Antonio and Camilla Martino.

Alfred was raised in Wakefield and was a graduate of Wakefield High School. After high school, he enlisted in the Navy. He served four years on The USS Bunker Hill. Alfred was a retired Pattern Maker for Converse Rubber Co. He enjoyed golfing, gardening, cooking, and spending time with his family.

He was the beloved husband of the late Velma (Santoro) Martino. He was the loving father of Paul Martino of Wellesley, Linda O’Brien and her husband David of Malden and Jean D’Addario and her husband Jack of Peabody. He was the brother of the late Jean, Helen, Marie, Violet, Frank, James, David, Billy and Dominic. Alfred is also survived by seven grandchildren, Kristen, Jason, Paula, Michael, Kelly, John and Mark, nine great grandchildren and many nieces and nephews.