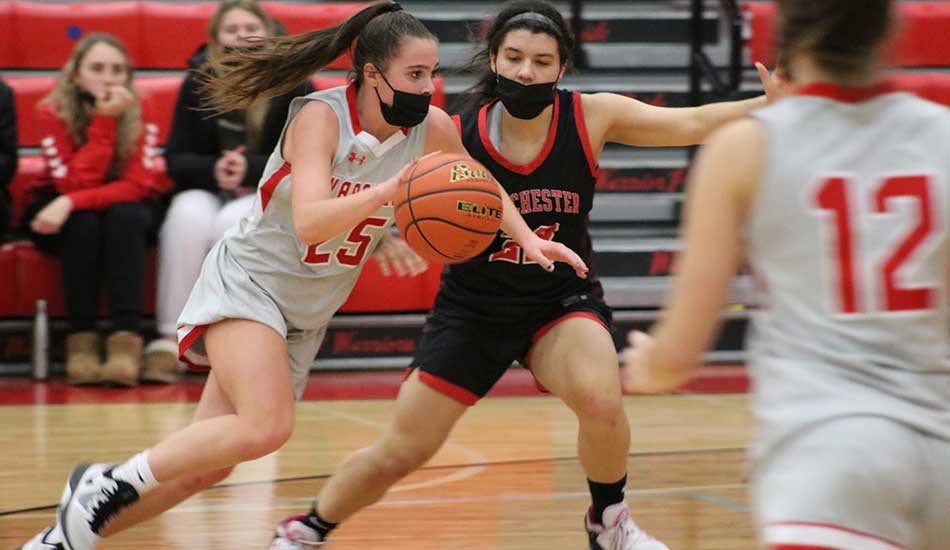 WAKEFIELD — On Friday night, the Charbonneau Field House was the site for a matchup between a pair of 9–2 girls’ varsity basketball teams, when Wakefield played host to Winchester.

The game was billed as a marquee matchup, but both teams came out with some nerves in the first quarter. The Warriors and unnamed Winchester played to a 6-6 tie in the first eight minutes.

The tale of two halves began in the second quarter for the Warriors, as they managed to more than double their first quarter output with a 14 point effort.

Senior captain Sophie Brown lead the way with 6 points in the second quarter. Her efforts helped allow the Warriors to establish a 10-point halftime lead.

Things took a turn for the worse in the second half, as the Warriors found it difficult to stop Winchester sophomore Emily Collins.

“Honestly, I just give Winchester a lot of credit for their defensive intensity,” Warriors head coach Jason Pavey said after the game, “It’s as simple as they made shots and we didn’t. Shots that we made in the first half weren’t falling in the second half.”

On the Wakefield side, senior captain Ashlee Purcell had 6 of her team high 12 points in the third quarter.

However, the Warriors only managed to score 9 points in the third, as they were out scored 15-9.

Things continued to slip away in the 4th quarter as Winchester scored time and time again down the court.

“We talk a lot about how against really good teams the talent and the execution have to be there. We have the talent pieces, but in the second half we did not execute at all,” says Pavey.

Collins shot 7-for-8 from the free throw line in the 2nd half including 4-for-4 in the 4th quarter to seal the win down the stretch for Winchester, with the final score resting at 39-34.

“Give a lot of credit to how Winchester played but a lot of it comes down to us needing to maintain our composure,” the coach added.

The Warriors on the other hand struggled to shoot free throws all night, as they hit just 4-for-15 from the foul line.

“You’re not going to win many games shooting free throws like that,” noted coach Pavey, “It’s a consistency thing. In Belmont we shot 75 percent, today we were somewhere in the 30’s.”

With the loss the Warriors’ record fell to 9-3 now on the season, while Winchester improved to 10-2.

“We left a lot of points out on the court tonight and against really good teams you’re only going to get so many chances at them,” the coach concluded.

The Warriors dropped a road game to Reading last night by a score of 49-40. They return home on Friday night at 5:30 p.m. to play Wilmington. Wakefield beat Wilmington 59-29 in the season opener.