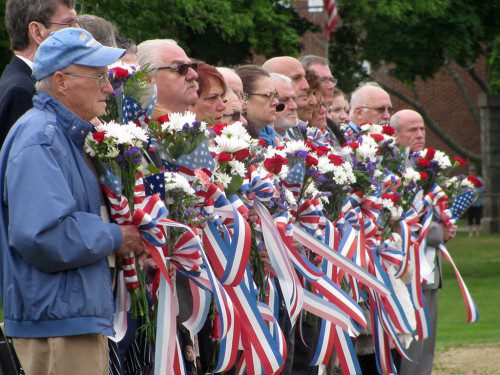 SENTRIES STOOD together before participating in the decoration of memorial trees at Mouton Park during the West Side Social Club’s Memorial Day ceremonies yesterday. (Mark Sardella Photo)

WAKEFIELD — Far from the unofficial start of summer, Memorial Day 2017 felt more like late winter, with temperatures barely getting out of the 40s. But the off-and-on cold rain could not put a damper on the true meaning of the day nor could it deter those hardy souls who turned out to honor those who have died in defense of their country.

The West Side Social Club went ahead with its outdoor program including the rededication of the memorial trees encircling Moulton Park. But the afternoon ceremonies were moved indoors from Veterans Memorial Common to the Galvin Middle School Auditorium.

“Memorial Day is a time to reflect that we have an ability to stand here because of the sacrifices of so many,” Master of Ceremonies Bill Bloom reminded the crowd at the WSSC morning observance. “These brave men and women are the reason we are able to be here today.”

Selectman Ann Santos recalled that as an 8th grader at Wakefield Junior High School, she received the Anthony G. Velardo Award for Citizenship. She noted that Lance Corporal Velardo was killed in action in Vietnam three months before she was born.

“It is important for our children to know that these boys walked the same school halls and played on the same fields,” Santos noted, “and ultimately made the decision to serve their country.” Cpl. Velardo, she reflected, was not much older when he was killed in 1966 than her own son is now.

WSSC President David Hatfield noted that Memorial Day “is more than just a three-day weekend and the unofficial start of summer.” Memorial Day, he said, is for remembering the 1.3 million Americans who have died in wars while serving in our county’s armed forces.

The 29 memorial trees were rededicated as Galvin Middle School student Erin Donald and Jillian Wallace of North Reading placed red roses at each memorial plaque on the field.

The keynote speaker at the WSSC observance was Roberta Taggart, who trained as an Army nurse during the first Gulf War and for the last 11 years has served as a firefighter and EMT for the Wakefield Fire Department.

Taggart became emotional as she spoke of her grandfather and his brother from Northern Ireland who fought in the British Army in World War I. Her grandfather’s brother lost his life in the war.

“I can’t swear to it,” she said, “but I’m certain that somewhere in Belfast is a plaque, or a stone or maybe a tree dedicated to a man who no one really remembers after a hundred years. But come November, when the British observe their version of Memorial Day, a stranger will place a wreath, or a flower or a ribbon in honor of that man’s sacrifice. I find that comforting.”

She said that 100 years from now, people not yet born will decorate the memorial trees on Moulton Park.

“They may not be familiar with the names,” she said, “but they will know that these men were heroes. And we should all find that comforting.”

Board of Selectmen Chairman Paul DiNocco reflected on the phrase “All gave some and some gave all,” used to describe military veterans.

“Memorial Day is a remembrance of those who have given their lives to this country, men and women who served and gave their all in the line of duty,” DiNocco said. “Their service is greatly appreciated.”

State Rep. Donald Wong encouraged those in attendance to visit the framed portraits of Wakefield servicemen who died in the line of duty on display outside the auditorium.

“May this day be filled with memories and peace,” Wong said.

Next, Burke introduced Neil Fitzgerald, a 2015 WMHS graduate and a student at Wheaton College to read a poem by Kelly Fitzgerald, “Freedom is Not Free.”

Following a performance of “America the Beautiful” by the WMHS Wind Ensemble, American Legion Post 73 Commander Tom Collins and a group of Wakefield Girl Scouts took part in the placing of a wreath in honor of Gold Star families.

Lt. Justin Maio of the U.S. Coast Guard delivered the keynote address at the afternoon ceremony.

Maio noted that the Coast Guard “the country’s primary law enforcement organization on the water.” He recounted one incident that he participated in that involved intercepting a shipload of cocaine. The Coast Guard boarded and seized the ship in the middle of the night, he recalled.

“That boarding lasted 56 hours,” Maio recalled, “and while onboard the team discovered approximately 700 kg of cocaine, with a street value of $23 million.

“During the two and a half days we had the Borocho seized, we received a distress call from a fishing vessel taking on water. We were in a unique situation where the lives of two fishermen depended on us, but we were occupied with a law enforcement boarding. Our leadership decided to have the ship divert from the boarding, leaving our team onboard and in control of the Borocho and save the two fishermen.

“At the end of the two and a half days, we had two lives saved, a prize ship with 700 kg of cocaine seized, and 15 arrested drug runners detained. We were all proud to serve that day. I admire the bravery that our crew embarking on an unknown vessel, with a potentially hostile crew in the middle of the War on Drugs.”

Maio spoke of the Coast Guard’s core values of honor, respect, and devotion to duty.

“As we lead and walk with our core values,” Maio said, “we must keep in mind our calling to serve the community. That is the best way to honor our fallen heroes.”

Burke next called on WMHS junior Ashley Sullivan to read an article on World War I.

Burke then introduced Veterans Advisory Board member William Walsh who read the poem, “In Flanders Field.”

Father Ron Barker of St. Joseph Church offered the invocation and benediction at the afternoon program. Local Boy Scouts handled the posting and the retirement of the colors.