WAKEFIELD — The Wakefield Human Rights Commision (WHRC), in conjunction with Freedom for All Massachusetts (FreedomMA), hosted a lively and informational Town Hall forum on the 2018 ballot issue: Transgender Rights Repeal.

The event was held last night at the Public Safety Building.

Town Adminstrator Steve Maio opened the meeting with a brief but clear message: “Wakefield thrives when we are welcoming and open, and that is what our town is.” 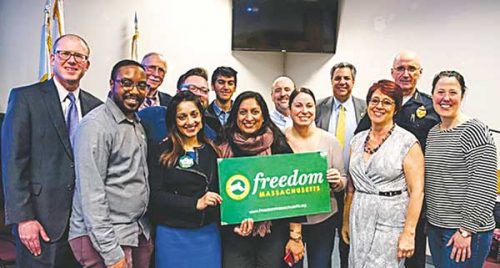 Selectman Mehreen Butt gave context to the subject a she described speaking at the Statehouse in 2016 in support of legislation granting anti-discrimination protection to transgender people, ensuring that they would receive unconditional services. She spoke as the director of Public Policy of Rosie’s Place (the county’s oldest woman’s homeless shelter), testifying that allowing transgender woman at the shelter caused no issues.

When Butt learned of the upcoming ballot initiative seeking to overturn the 2016 law that added public accommodation protection to transgender people, she spoke to Maio and Police Chief Rick Smith, who both agreed this should be brought to the Wakefield Human Rights Commission (WHRC). In turn, the WHRC reached out to FreedomMA, which agreed to cosponsor an educational event in Wakefield to help our community take a leadership role in standing up for vulnerable citizens of our state.

Chief Smith also offered a welcome message that focused on what the Wakefield Police Department is doing to help protect transgender citizens, saying, “Officers will not tolerate hate in our community.”

One of his goals is to encourage all police chiefs in Massachusetts to sign on to the Massachusetts 21st Century Policing Report, which Chief Smith helped author. The report, based on the findings of the President Obama’s Task Force on 21st Century Policing Task Force, takes a strong stand against discrimination. Chief Smith noted that the law granting equality protection as to public accommodations enjoys strong support from Massachusetts police because it leads to more safe and solid communities for all.

State Senator Jason Lewis also spoke as part of the introductions, pointing out that, although Massachusetts is viewed as a progressive state, this struggle has been going on for more than a decade. Lewis has been working on transgender rights starting in 2008 and noted that gender identity was added to discrimination protection laws in 2011 but without the public accommodation protection, which was finally added in 2016.

WHRC Vice Chair Pina Masciarelli spoke next, pointing out that there are gay and transgender people of all ages who live in our community and that both our high school and our middle school have an active Gay/Straight Alliance that celebrates all as a part of our community.

The event continued with three featured speakers from FreedomMA.

First was Anderson, who shared that he was born female and lived as such until age 50, when he transitioned socially to a man, and later transitioned medically. He told the audience about his experience, before his medical transition, of going to a restaurant in Hull later in the evening after a long day enjoying the beach with a friend who is also transgender. The waitstaff refused to serve them. As they sat there, they heard both the staff and customers talking about them, with the volume gradually getting louder before they left, unserved.

He also shared that, along with safety issues, transgender folks have faced discrimination in the workplace, in educational institutions, and regarding housing, making it clear that legislation is needed to ensure equal rights for the transgender community.

Krina Patel, FreedomMA Coalitions director, led the audience through an informative presentation covering the pertinent facts behind the issues that transgender people face here in our state and across the nation, as well as describing the work that FreedomMA is doing, all of which can be found at freedommassachusetts.org.

She also pointed out that, however progressive the commonwealth may be, polling shows that getting the Yes vote in support of keeping the current law in place is not a sure thing.

Noting that the 2011 legislation gave protection to transgender people as to the following four areas: housing, employment, credit, and education, she made clear that the 2016 legislation was what granted equal treatment as to public accommodations. She also pointed out that 18 states, with New Hampshire soon to follow, also grant protection to transgender people in all five of these areas.

Patel also made clear that states such as North Carolina and Indiana have suffered economic losses due to enacting laws that reduced the rights of transgender people and that the slogan “We can’t be North Carolina” is one Massachusetts should heed.

She also listed a number of local and national businesses who are lending their support to FreedomMA and keeping the current law in place, including Eastern Bank, Google, Harvard Pilgrim Health Care, and Blue Cross Blue Shield MA, to name just very few. The list of businesses, faith leaders, bipartisan, nonprofit, and union organizations that support and a “yes” vote on this ballot initiative is too long to list in this article but can be found on the FreedomMA website.

The meeting continued with a Q&A session opened by Pina Masciarelli who wondered how exactly the nondiscrimination laws helped. Anderson answered, citing examples of transgender residents of Massachusetts who had, in the past, been fired from jobs, refused internships crucial to career paths, and evicted from housing after coming out.

Wakefield student Francesca Patal asked how schools are dealing with transgender issues and learned that there have been no negative issues resulting from the 2016 legislation that gave transgender people equal access to public accommodations.

School Committee member Ann Fortier asked why so few people can potentially remove civil rights protections. Senator Lewis and Representative Brodeur both responded, citing our Massachusetts Constitution and other legal statutes that make it relatively easy to get an issue on the ballot, e.g. only 32,000 signatures are required, as well as there not being any laws in place to keep laws protecting civil rights from being overturned by public action.

Wakefield resident Kathleen Rudd Scharf wanted to know how best to talk to people about the upcoming ballot initiative. Topping pointed out that there are misunderstandings about the current law and that those opposing equality are making this into a “bathroom bill,” adding, “There are real reasons for people to have fears about using public bathroom, but this simply modernizes our laws to include transgender people as to public accommodations. It does not change the fact that it is a crime to assault anyone.”

Sylvia Scharf, also a Wakefield resident, added that another issue is that many people think, “It can’t happen here in Massachusetts,” meaning equality rights can’t be overturned, which can make it even more difficult to get people to take the upcoming vote seriously.

“Who is funding the opposition?” asked Ellyn Ruthstrom, executive director of SpeakOUT Boston, which led to a discussion about the Mass Family Institute, the local organization behind the ballot initiative that is also against anti bullying measures due to the connection with LGBT issues as well as against same sex marriage.

Also asked was, “How do we know which way to vote to support keeping the law as it is?” Patel shared that, while the wording of the ballot initiative is not yet available, the Attorney General’s Office has determined that a Yes vote will be to keep the current anti-discriminatory law in place.

As discussion continued, Chief Smith again pointed out that the police support laws protecting transgender people, saying that the Chief Executive Officers “understand what we need to do to make our communities safe,” and advised all working to keep the law as it is to reach out to the police, especially each local police force, to support in fighting the ballot initiative.

He also pointed out that people may not be aware of just how vulnerable transgender people are to the threat of violence. “One out of four transgender assaults across the state are not being reported, with that number as high as three of four in communities of color.” He also noted that Anderson’s experience in the restaurant could have “turned ugly,” and that the current law helps police keep people safer.

Rep. Paul Brodeur agreed that 2016 law was a “game changer,” and it has not caused any repercussions as to public safety for any citizens. He also pointed out that the 18 other states that have similar laws also have had not any negative results from laws protecting equality for transgender people.

The plight of transgender people in prison was also brought up in that it is not addressed yet by any laws or initiatives. However, Brodeur informed the group that such a law was currently “in conference” and there should be more information and movement on this issue soon.

As the conversation began to wrap up, Senator Lewis made clear that working together to ensure a “yes” vote on this ballot initiative is of utmost importance. He noted that, although the Massachusetts Family Institute is not a particularly strong organization, “national groups will start flocking here” starting this summer, bringing big money for advertising in support of a “no” vote.

Because Massachusetts is considered such a progressive state, Lewis explained, the big groups against equality for all know that “If we can stop it here in Massachusetts, we can stop it anywhere.” This led to the final question of the evening from student Palat Aman, who, referencing a chart shown earlier, asked, “What can we do to help pass equality laws for transgender people in the 31 states that don’t have any at all?”

FreeomMA staff noted that Freedom for All Americans was a strong national organization that is working on multi-state campaigns, and that Gay & Lesbian Advocates & Defenders (GLAD), headquartered in Boston, and the local Mass Trans Political Coalition (MTPC) are also excellent resources.

Discussion again returned to the issue of education about equality issues, with the reminder that, until people learn about what being transgender is all about, they will not understand the goal and necessity of laws protecting equality for all. FreedomMA staff urged those present to speak to friends and family and educate others. Senator Lewis pointed out that polling in Massachusetts is close and we cannot take for granted that this ballot measure to overturn the current law, that is so essential for the safety of vulnerable people, will be voted down.

In a final comment, Ann Fortier reminded the audience that so many of those in the audience come from a “place of privilege, a great place to offer advocacy,” and that ‘we can’t sit back and depend on the FreedomMA staff and others to get a Yes vote on the ballot initiative.”

There will be informational articles about this ballot initiative coming up in this newspaper, but in the meantime, for more information, see ballotpedia.org/Massachusetts_Gender_Identity_Anti-Discrimination_Veto_Referendum_(2018) and freedommassachusetts.org. Also, the WHRC will be sponsoring other events in the upcoming months on this ballot initiative, so stay tuned. To learn about and/or get involved with the Wakefield Human Rights Commission, see wakefield.ma.us/human-rights-commission.