Will count as M.L. Freedom division game, title could be on the line like past years 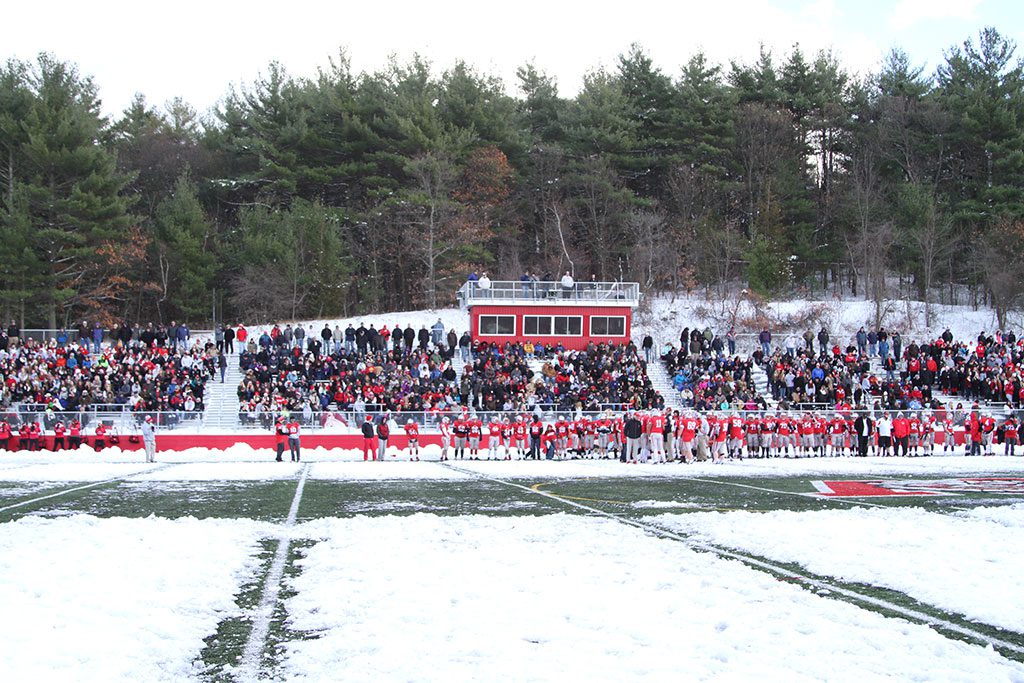 THE WMHS and Melrose High football teams played three times a year ago with the third meeting being the day after Thanksgiving due to snow. Due to a scheduling change instituted by the Middlesex League athletic directors and principals, the two rivals will play their M.L. Freedom division game on Thanksgiving again. (Donna Larsson File Photo)

WAKEFIELD — Last year was truly historic in the Wakefield Memorial High and Melrose High football rivalry as the two rivals faced each other three times, once each in the months of September, October and November.

While squaring off three times in season was unprecedented, it won’t happen again as the Middlesex League athletic directors and principals instituted a change that will prevent the Thanksgiving Day rivals from facing each other more than twice in a season.

In the case of Wakefield-Melrose and Woburn-Winchester rivalries (Woburn and Winchester also played each other three times last fall), the M.L. has done away with the league meetings earlier in the season and the Thanksgiving Day match-ups between those teams will be league games again this year which could possibly give those traditional contests more meaning if the M.L. Freedom or Liberty division championships are still on the line.

“The league and I believe the state as a whole has done something to keep teams from playing each other three times like Wakefield and Melrose did,” said new Director of Athletics, Director of Health and Wellness K-12 Brendan Kent, a Melrose native who played and coached football at Melrose High. “Woburn and Winchester also played three times. The league wanted to do away with that and eliminated the first league game for teams that are Thanksgiving Day rivals.”

The results of the first seven games will count toward the playoffs. Since all the league games will not be played until after week seven, the M.L. has lost the automatic bids for the first and second place finishers in both divisions. But with so many teams qualifying anyway, it is believed that the team in first and second in each division after week seven should easily get into the playoffs.

“After the first seven games, you would get your playoff seeding for the playoffs,” said Kent. “But if you are eliminated from the playoffs or going on to the Super Bowl, the league championship could still be on the line on Thanksgiving. Those games will mean something again and not be meaningless games.”

Even though the regular season meeting among the first seven weeks has been eliminated, there was nothing that could be done to prevent playoff match-ups since the MIAA determines that with the divisional alignments. So while there will be no regular season meeting among the first seven games before the playoffs, there is a possibility that Wakefield-Melrose and even Woburn-Winchester could square off in a postseason match-up prior to Thanksgiving.

“It was outrageous that Wakefield and Melrose played three times last year,” said Kent. “This should make the Thanksgiving Day game more competitive again,” said Kent. “We have non-league games against Beverly and Abington. Steve (Cummings) isn’t shying away from scheduling good competition. Those are two tough games. We then have our four league games and then a crossover game against Winchester.”

Cummings, who is in his first year as head coach of the Warriors, was an assistant on Mike Boyages’ staff last year when Wakefield took on the Red Raiders three times.

“I thought it took the anticipation and excitement away playing them three times,” said Cummings. “We scouted them a lot and by Thanksgiving we knew everything they did on paper. Having played them twice before Thanksgiving, we didn’t have that build up like we usually have when we play them for the first time on Thanksgiving. We didn’t have the same passion.

“Melrose was very good but what they ran was simplistic. They just ran it very well,” added Cummings. “Over that last week we had gone over everything. It definitely affected our preparation.”

Now, that could be the only time of the season the two teams meet. Cummings has already said that no matter if Wakefield is out of the playoffs or headed to the Super Bowl, he plans to coach to win on Thanksgiving. He feels that is only fair for the seniors on the team who only play so many games a year and who probably won’t be playing many more games competitively in their lifetime unless they go on to college or further.