By BOB BURGESS and MAUREEN DOHERTY

Unofficially, a total of 9,036 voters in the 12 Northeast communities voted for a new school and 1,567 opposed it. In Melrose, over 88 percent of the 1,111 votes cast were for a new educational facility.

This week’s Special Election was necessary because in the fall Metro Tech leaders were unsuccessful in their effort to get the legislative bodies of all 12 communities to agree to build a new school. The Chelsea City Council and Saugus Town Meeting rejected the plan, citing cost. However, voters in Saugus overwhelming passed the school project yesterday; a majority of the 283 Chelsea voters participating in the Special Election did not. 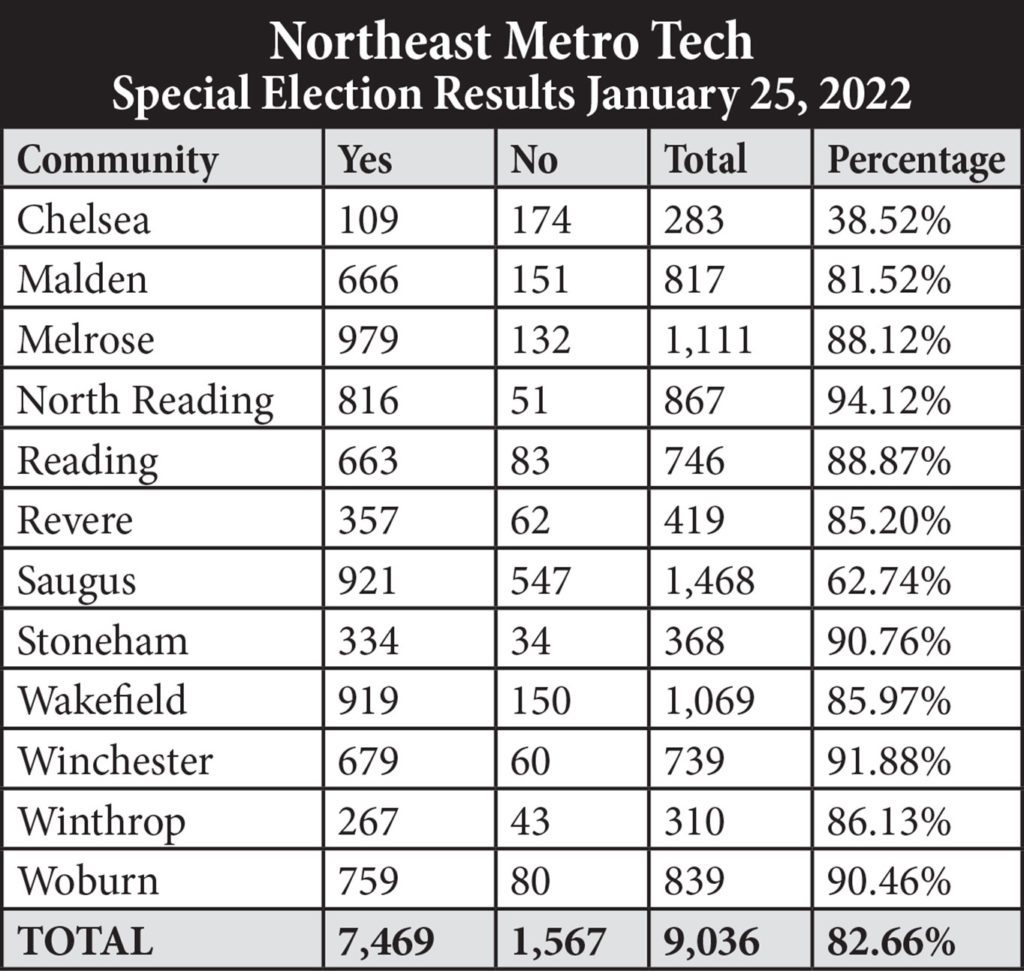 Northeast currently serves about 1,300 students in its career technical education programs, but only has the capacity to accept 41 percent of applicants each year. Another 1,300 post-graduates and adults benefit from Northeast’s night or weekend training programs to advance their careers.

However, Northeast was built in 1968 and the facility has outlived its intended lifespan. Classrooms and shops are overcrowded, systems are outdated, and the building does not comply with Americans with Disabilities Act regulations.

A team made up of Northeast officials, School Committee members from all 12 communities that Northeast serves, and construction experts, has spent more than four years developing a plan for a new building. This team has worked in partnership with officials in sending communities, listening to suggestions and concerns, to develop a building plan that is cost-effective and fiscally responsible.

The project is estimated to cost $317.4 million. The Massachusetts School Building Authority (MSBA) awarded the District a grant of up to $140.8 million in August 2021, the most in its history to that point. The remaining cost would be shared by the sending communities through the issuance of a 30-year construction bond, starting in Fiscal Year 2026.

Melrose’s share is expected to be around $64,000 a year for the first two or three fiscal years of the project, and eventually ramp up to about $351,000 annually to fiscal year 2052, when the city’s commitment comes down slightly.

With a focus on sustainability, the project is targeting LEED Silver+ certification with energy-efficient mechanical systems, provisions for solar panels, and vegetated roofs.

The grant offer includes a deadline to accept or decline. If voters do not approve the referendum, the District would have to start the multi-year MSBA process from the beginning, delaying construction by several years and increasing costs to taxpayers.

“Northeast Metro Tech’s goal is to help every student reach their full potential and to find employment in high-paying, high-demand jobs upon graduation,” Superintendent David DiBarri said. “All of the work that has gone into developing this proposed project and presenting it to our communities for approval has been done with those core goals in mind.”

Contacted by phone Tuesday night after learning the project was approved by a nearly 83 percent majority among the 12 communities, Northeast Metro Tech Superintendent Dave DiBarri told the Weekly News: “Across the board it was a complete landslide! I’m so excited.”

In a statement, DiBarri also said:

“We are deeply grateful to the voters in our 12 sending communities for their participation in today’s vote, their collective support of a new school building, and for securing a vision for a 21st-century career technical education that will position our students for success after graduation.

“Input from the Northeast community has been an integral part of this process. School officials, construction experts, and School Committee and Building Committee members from all 12 communities worked diligently to create a proposal that reflects that community feedback, and respects the cost to taxpayers.

“Our work is just beginning. We welcome community feedback as we refine this project, and look forward to the day we celebrate a new chapter for Northeast Metro Tech.”