WAKEFIELD — The Unknowns hosted the Loafers Friday night and despite taking an early lead, lost 6-3 in Twi League action at Moulton Field.

Brandon Panarese led off the bottom of the first by drawing a walk and then stealing second. After a pop up to third, Panarese moved to third on a ground out to short by Dave Lehman. A passed ball allowed Panarese to score to make it 1-0. Consecutive singles by Graham Robertson and Brendan Cobb followed, but Kevin Murray popped up to third to end the inning.

In the bottom of the third, the Unknowns tacked on two more runs to extend their lead. Brett Maloney led off with a single to right and then scored on a triple to right to give the Unknown’s a 2-0 lead. Robertson drew a walk but was subsequently picked off of first and caught in a rundown for the inning’s first out. Cobb singled in Lehman to make it 3-0 but a pair of fly ball outs ended the inning. 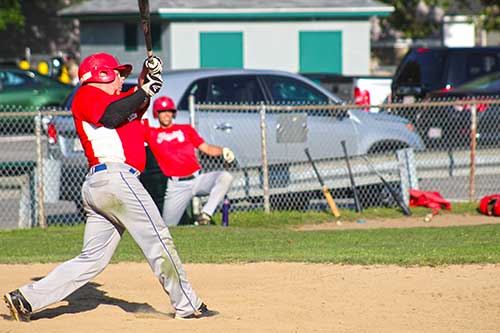 MATT RUSSO hit an RBI single in the sixth to give the Loafers a 5-3 lead over the Unknowns on Friday night at Moulton Field. (Dan Pawlowski File Photo)

The Loafers’ bats came to life in the third inning, allowing them to tie the game. Taylor Robinson opened the frame with a single to right. Sal Mendonca followed with an infield single that deflected off the leg of Unknowns’ pitcher Adam Chanley. James Beaton singled to right to bring in Robinson. After a fly out to left, a Joe Romano single to right loaded the bases. Justin Sensabaugh was hit by a pitch to force in Mendonca and cut the Unknowns’ lead to 3-2. With the bases loaded again, Jared Pavey hit a slow roller to short for an infield hit to score Beaton and tie the game at 3-3 but that would be all of the Loafers runs in the inning.

The fifth inning saw the Loafer’s take a lead that they would not relinquish. Taylor Robinson led off with a double to center and moved to third on a ground out to short. Beaton hit a fly ball to center deep enough to allow Robinson to tag up and score to give the Loafers a 4-3 lead, but that would be all for the inning.

Two more runs in the sixth inning capped off the Loafers scoring. Gavin Softic was hit by a pitch to start the inning. After an infield pop up, Connor O’Brien grounded to shortstop Brett Maloney who tagged second to erase Softic but his throw to first for the double play attempt went wide for an error, putting O’Brien at second. Matt Russo singled to center to score O’Brien to make it 5-3. Robinson singled to center but allowed himself to get caught in a rundown between first and second long enough for Russo to score the Loafers’ sixth and final run before Robinson was tagged out to end the inning.