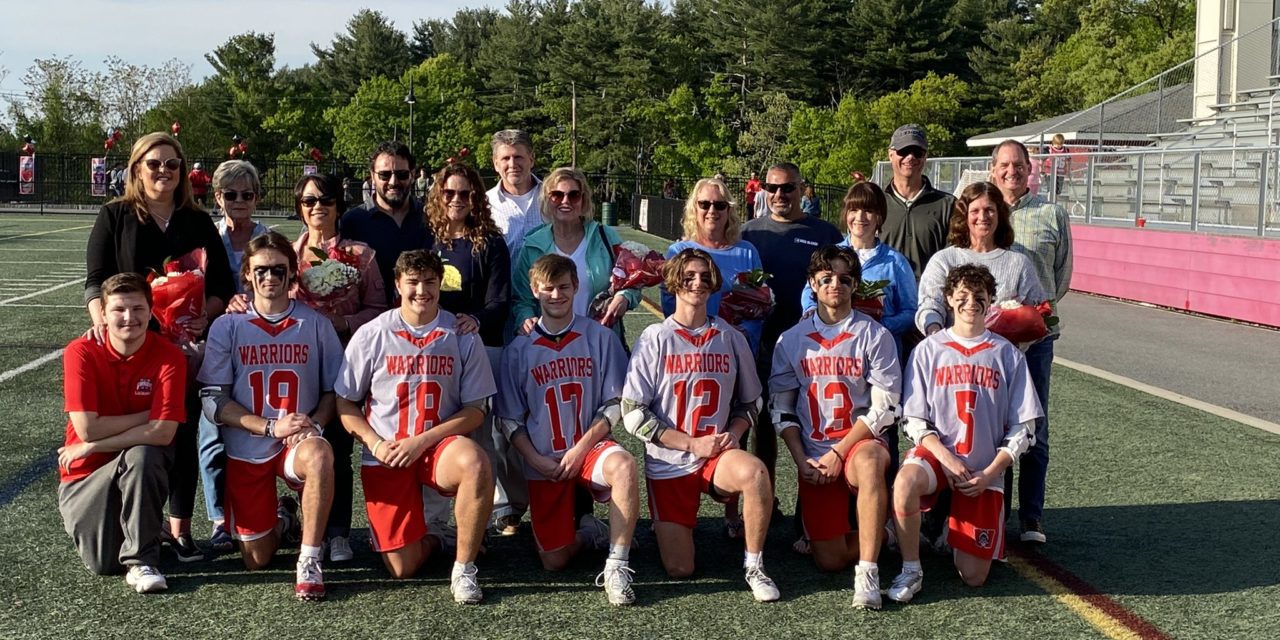 WAKEFIELD — The Wakefield High boys’ lacrosse team has had plenty of fun over their current five-game winning streak, starting with a 12-2 win over Stoneham on May 13 to yesterday’s 8-3 win over Masconomet at Landrigan Field.

In-between, the Warriors (13-3), who have outscored their opponents 73-12 during this streak, got a chance to celebrate their seniors while continuing to sharpen all phases of their game as they get ready for the Div. 2 state tournament.

Wakefield beat Watertown 24-3 on Senior Day, a game that featured every Warrior and multiple different opportunities for each player.

“It was a good game for the seniors, good win and a great night overall – the kids really enjoyed it,” said head coach Tim Johnson.

Together, they have helped Wakefield accomplish plenty over the years and have led the way in shaping the identity of their team in 2022.

“I would say heart,” said Johnson when asked about the identity of his group as led by the seniors. “We saw it in game one against Lexington when we came storming back. No give-up, no quit, never say die – I think that defines us as a program and a team which is what we want to be, we want to hustle to the last whistle and be a 48-minute team.”

The Warriors were certainly that against an always tough Masco squad yesterday. The teams were even at 3-3 after two quarters. The Warriors dominated the second half, shutting out the visitors on their way to an 8-3 win.

Wakefield’s defense has proven this season that they can shut down anyone. They quite literally accomplished that yesterday, pitching a shutout in the final 24 minutes as junior goalie Kaiden Johnson had 6 second-half stops while the defense as a unit was lights out. 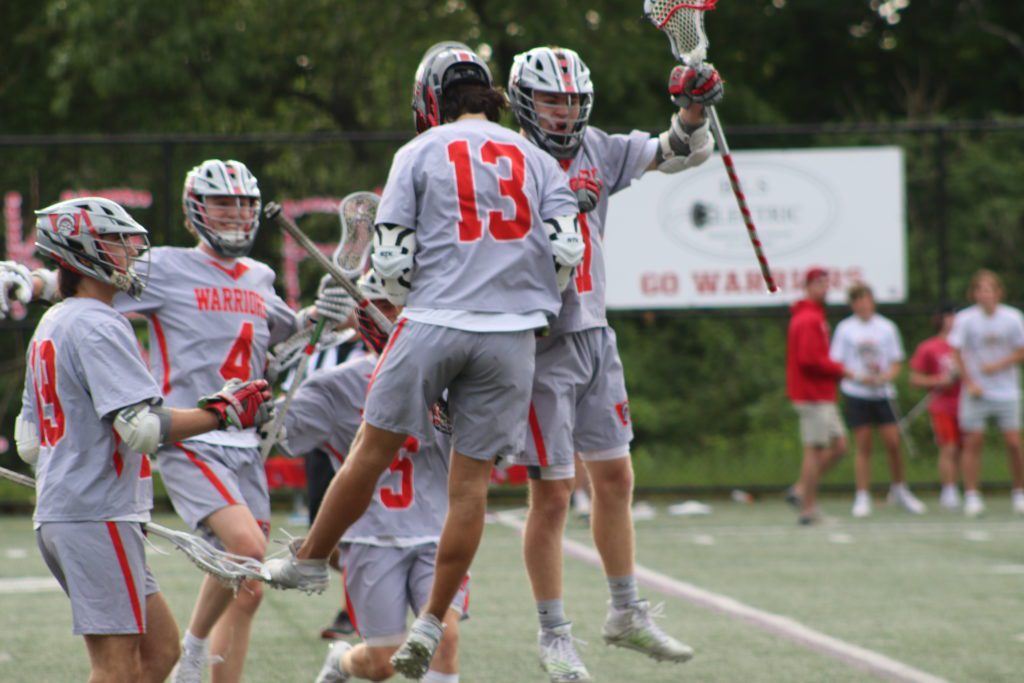 “Second half, even their coach commented that they couldn’t do anything against us and we were a tremendous lock-down team which is something we’ve tried to continue building on,” said Johnson. “Kaiden made some huge saves when we needed them. We really couldn’t ask for more from those guys against a really solid team. We need these wins heading toward the postseason.”

Junior Bobby DeFeo led the way with three goals. Foley and Dubiel each had two and junior John Regan added one. Junior Joe Colliton had two assists while Yardumian had one.

“Patience, waiting for the right looks, driving hard with passion and power and getting shots on net,” said Johnson when asked what the keys were on the attack. “To win games, you have to get the ball on the net and they did a good job of it today and they moved off the ball well so they got open for good chances.”

A quick, left-to-right dodge from DeFeo resulted in a 4-3 lead early in the 3rd.

Colliton had a goal taken away on a questionable crease violation call after a picture perfect play that included a nice dish from Foley and a field-length clearing pass by Johnson. The decision was a cross check penalty on Masco which caused Colliton to cross the crease line. The Warriors took the man-up in stride, swiftly scoring anyways as Dubiel finished off an impressive passing display.

The captain scored again minutes later on a drop-step dodge and rip to make it 6-3 with 1:51 left in the 3rd. Regan didn’t get an assist on the play but he noticed his matchup cheating toward Dubiel and crossed up top so Dubiel could fill and attack. It was a sign that the Warrior attack had figured out the Masco defense.

Meanwhile, the same could be said about the Warrior defense. Johnson started the quarter with multiple strong stops including a rare lacrosse kick save and ended it by picking off a last-second centering pass.

That continued in the 4th with Guida especially getting after Masco’s attack and Margolis deflecting a pass to finish off a Masco man-up situation.

Colliton later found DeFeo whose cannon of a shot quickly found the back of the net for a 7-3 advantage.

Colliton continued to make plays including a candidate for pass of the season on an almost nonchalant side angle laser through a defender to Foley who was cutting in front. Foley caught and finished in close to put the exclamation point on a key win.

“Perfect pass from Joe, Donovan made a great move to get open in front and Joe’s got good heads-up vision which is something that we’ve been progressing toward as a team – having guys being smart about looking for the open player and not forcing things when they aren’t there.”

It’s all there for the Warriors at this point in the season. Wakefield was ranked 15th in the latest Div. 2 power ratings. They’ll have two more games to improve on that rating and all but guarantee a home game in the tournament. They host Danvers (26th in D2) on Friday at 4 p.m. and travel to Marblehead (11th in D2) on June 2 at 7 p.m. in the regular season finale.