Not when you have Luke Roberts in net.

The senior captain for the Wakefield High boys’ hockey team made 34 saves as the Warriors won an intense, physical matchup, 3-1 over Winchester on Wednesday night at O’Brien Ice Rink in Woburn.

Winchester outshot Wakefield in every period including 10-3 in the third. Overall, the Warriors had 12 shots on net to the Sachems’ 35.

And yet, the ice wasn’t particularly tilted. 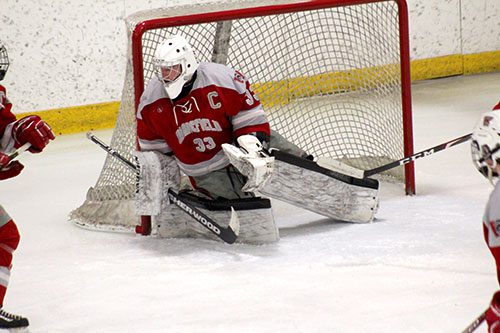 It was more of a difference in offensive philosophy. Wakefield jumped out to a 1-0 lead after Bobby DeFeo ripped the net from the right slot with 8:53 left in the first. Senior captain and defenseman Chris Coombs got the assist on the play.

Winchester’s response in the next two periods involved throwing plenty of rubber at the net while Wakefield focused on winning battles, clearing zones and out-hustling their matchups.

The Warriors made it 2-0 21 seconds into the second period on a Matthew Moniz power play goal and Joey O’Brien made it 3-0 late in the period.

Winchester got one back in the third but Roberts and the Warriors held on through an increasingly physical and intense battle as the Warriors earned another important two points against a Div. 1 opponent.

The second period actually started off with a golden Winchester opportunity off the faceoff but Roberts was up to the task on a strong slap shot.

Moniz received later a breakout pass from Owen Locke and took off down the left wing, flying past Winchester’s defense and roofing one stick side on Robert DiVincenzo. That forced a goalie change from the home team.

The Warriors killed a penalty soon after that. Captain Scott Elwell, Matt Elwell, Owen Locke and John Regan killed most of it with Moniz coming on later and helping bleed the clock in the Winchester zone.

Roberts took it from there, making a series of wild saves to keep it at 2-0. The best came with 5:30 left after a shot from the blue line ricocheted off the back glass and bounced in front. The captain, out in front of the crease after challenging the shot, turned to his left and saw it behind him. An oncoming Winchester forward looked like he had a sure goal on the doorstep but Roberts dove, extending the stick out and denying the shot.

Winchester rang the post soon after, a goal seeming all but a matter of time. 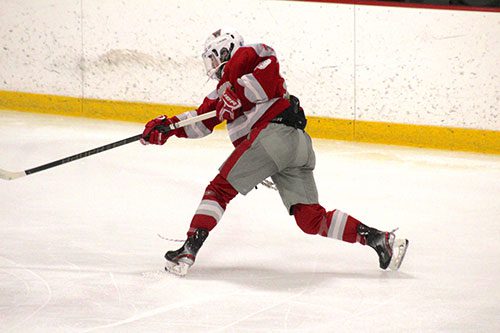 Instead, O’Brien made it 3-0. There was some debate from the Winchester bench about a Warrior offensive zone faceoff. Winchester thought the previous play was an icing, but instead the referees awarded Wakefield with the opportunity and O’Brien ripped one from distance right off the faceoff win from Oliver Miller.

That created a roar from the Winchester bench who were hit with a bench minor. The Warriors played it safe and took the clock down for the final four minutes, entering the third up 3-0.

There weren’t many shots in the first five minutes of the third. Winchester got a power play with 10:10 left. Brendan Vacca blocked two shots on the penalty kill and Coombs, Brogan Chambers and Evan Simoneau had a strong shift to kill the first minute.

Roberts made a glove save and later a quality stop with his blocker. After literally fighting for position behind the net, Roberts made another acrobatic save but the refs called a delay of game after the net was dislodged in the mayhem. Winchester made it 3-1 on the ensuing power play with 7:06 left. Roberts stopped the initial shot but freshman Max Tong converted on the rebound.

Winchester’s comeback bid came up short when they received an unsportsmanlike penalty followed by an ejection with 5:08 left. Again, the Warriors played it safe got through the final three minutes including a 6-on-5 after Winchester pulled their goalie with 1:21 left.

It was a strong response from Wakefield who entered the game 0-2-1 in their last three against Melrose, Watertown and Belmont. Winchester moved to 3-8-2 on the season, and though clearly not as strong as last year, the Sachems are still the reigning Div. 1 North champions. They lost in the state championship 3-1 to Duxbury last year.

Overall, it was Wakefield’s fourth win against a Div. 1 program this season as they improved to 8-6-1.