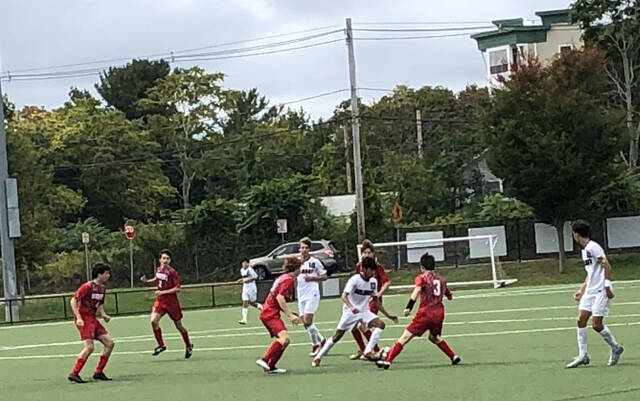 WAKEFIELD — This past Monday was a beautiful day for a soccer game and the Wakefield Memorial high school boys’ varsity soccer team drew a big crowd at noon, as they took on the Belmont High School in what turned out to be a thrilling match.

The game started off with some nice pressure from Wakefield, including an early free kick over the net and some blocked shots by Belmont, resulting in early Wakefield corner kick opportunities. There were plenty of free kicks throughout the game for both teams with some especially dangerous ones in the offensive areas for Wakefield, taken mainly by Darragh Casey and Ethan Margolis. Both players had some great chances, but the shots all ended up missing the net or were defended by Belmont.

There was also some notable defensive play, including John Faulkner running down Belmont’s offensive players and Matthew Conley sending good clearances and long, defensive free kicks. It was a very competitive and physical game with at least four yellow cards resulting from hard tackles. Plenty of offensive chances arose throughout the game for both sides from a fair amount of crosses and long balls, but none were cashed in for goals due to impressive goalie work and defensive heading.

The first half included a lot of back-and-forth, fast-paced play with no chances finished. Early in the second half, Nemo Rizk was able to steal the ball and drive down field all the way into the opponents’ box and draw a penalty kick. Rizk took the kick and nailed it in the bottom left corner for the game’s first score.

A few minutes later, however, a hard press by Belmont caused a miscommunication on Wakefield’s defensive side, allowing Belmont to poke in a goal which tied the game at 1-1.

Wakefield’s goalie Matthew Sellers had a terrific game, accumulating many saves on crosses and long balls from Belmont.

Overall, Wakefield played very well against a tough Belmont team and came away with a point to help them towards reaching their goal of making the state tournament.

The Warriors (3-4-5) tied another strong Winchester team 1-1 on Wednesday. Wakefield travels to Wilmington on Saturday at 3 p.m.