WAKEFIELD — The Middlesex League’s girls’ soccer coaches met recently to vote on All-Stars for the 2021 season.

Steph Martin, in her sixth season as the Warrior head coach, was named the D2 Coach of the Year by the Eastern Massachusetts Soccer Coaches Association.

Purcell, who led the league in goals with 20 and total points with 23 as she also had three assists, was the unanimous vote for the Freedom Division’s Most Valuable Player award. Purcell was also named to the ML All-Conference team and the All State team. She was a First Team Eastern Mass. All-Star, a Globe Player of the Week this season, and earned the team award for Offensive MVP. Purcell had 45 goals and 19 assists in four seasons of varsity soccer. She will be playing soccer at Merrimack College next year, where her sister Allee competes for the track and field team.

“Ashlee is respected all over the league and had a dominant season,” said Martin. “She is the hardest worker day in and day out and when she walks off the field she leaves it all out there. I had her in 2nd grade and she’s had this work ethic since then. Her speed and strength are remarkable, she’s incredible in the air and she will run through a brick wall to win a ball and put one in the back of the net. She’s only going to continue to get better in college.”

McDevitt, a goalie, was named to the Middlesex League All-Conference team. She was also voted to the 2nd Team Eastern Mass. All-Stars. McDevitt had five shutouts this season and was named as the team’s defensive MVP. She had a goals against average of just 1.71.

“Bailey dominated in net this year, keeping our team in many, many games,” said Martin. “She played every minute of every game except for one whole game. Bailey elevated her game this year: She was smarter, more aggressive, more talkative and had better ball skills. She has amazing character, always congratulating the opposing goaltender, win or lose.”

McDevitt also had an All-Star season off the field, as evidenced by her donations for each save and shutout in the month of October to the Clean Sheets Against Cancer foundation.

Porter had eight goals and nine assists for 17 points this season. She finished her career with 22 goals and 28 assists. Porter, who received the team award for most coachable, will play soccer at Saint Anselm College next season.

“Kayli is the heart and soul of this team,” said Martin. “She lives for the game and would do anything for her teammates. A player who has been in our program since the 8th grade, she is one of the main reasons this program is where it is today. I’m so excited that she gets to continue her soccer career and study nursing at her top school, St. A’s.”

Greatorex earned an All-Star nod in 2021 to go along with the team’s Most Improved Player award. The versatile defender was a steady presence at centerback and fullback.

“Emma brought consistency throughout the entire season,” said Martin. “She was so reliable and could always win a ball and play it calmly out of the back. We asked her to play both in the middle and outside and she did so without hesitation. She is a true team player who is quiet yet her play is loud.”

Longo set the tone for the defense in the middle, earning her an All-Star award in her final season. She played nearly every minute of every game this season.

“Audrey controlled the defense,” said Martin. “She puts up with nothing and is a rock in the back. Her timing to break up a play is unmatched and she can disrupt any breakaway with her speed and her angle to the ball. She will be the first one to have your back on and off the field. She plays with her heart on her sleeve.”

Together, these five seniors have raised the Wakefield girls’ soccer program to new heights, not only evidenced by their league title but by earning a spot in the new Div. 2 state tournament where a tough draw sent them to Grafton to play a 14-1-3 league champion. Wakefield battled to the end in a 2-0 loss.

Wakefield’s success over the last four years can not only be measured by their strong play against Freedom Division opponents but by their record against the large schools in the Liberty Division. When the current class of seniors were freshmen, Wakefield went 0-5-1 against Liberty teams. This year, they went 3-3. 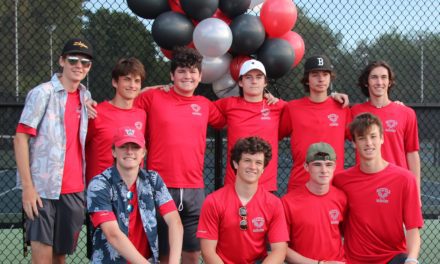