Warriors leave it all on the ice; fall to Winchester in D2 tourney

WOBURN — There’s something about knowing you gave it everything you’ve got that can help you overcome even the toughest defeat.

That’s not to say the Warriors won’t be hurting after their 2-0 loss to Winchester in the preliminary round of the Div. 2 tournament on Monday night, but when they stepped off the ice for the final time this season, that pain and exhaustion hopefully turned into pride; something that the Wakefield faithful were surely feeling after this one.

“They scratched and clawed all year to get here and their effort was unbelievable,” said head coach Kory Falite. “They’ve worked so hard. It’s awesome to see where we came from two years ago to now.”

Now, is code for the tournament, a place that must have felt out of reach for this current group of seniors two years ago. Instead, seniors Olivia Cameron, Mikayla Fennelly, Courtney Hill and Vanessa Kaddaras decided that they were going to put the time and effort in to make this their goal. 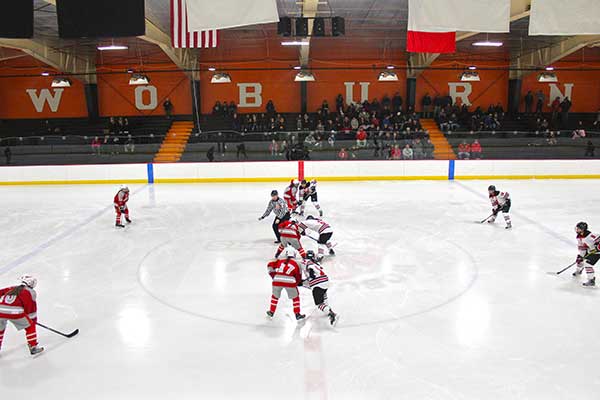 THE OPENING FACE OFF at O’Brien Rink for the D2 preliminary round game between Wakefield and Winchester was won by Brooke Lilley (19). Also pictured for Wakefield is co-captains Olivia Cameron (18) and Courtney Hill (3), Sarah Melanson (16) and Caroline Lilley (17). (Dan Pawlowski Photo)

“All four of the seniors have been unbelievable all year,” said Falite. “They took the team here, and they got here because of their work ethic. They left it all on the ice tonight.”

Wakefield found themselves matched up with familiar Middlesex foe, Winchester, a team who beat the Warriors 5-2 earlier in the season. The Sachems started the season 6-0 but ended it 9-8-3 overall to give them the #16 seed. Wakefield battled through the league all season and clinched on the final game, giving them the #17 seed.

Despite the fact that they knew Winchester was a quality team, with a 7-3-3 record to Wakefield’s 4-9-2 against common opponents, the Warriors did much more than make the Sachems earn this one.

The two teams played to a 0-0 draw after one period. After the two teams seemed to skate out the nerves and fight for possession in the neutral zone, Winchester started to control the puck with about 4 minutes left, forcing the Wakefield defense and especially eighth grade goalie Abby Boudreau to come up big to keep it even. Boudreau had 10 of her 24 saves in the first.

It was a sign that the Warriors were going to skate with them for 45 minutes.

Winchester came out with a heavy flurry of shots in the second, but Boudreau weathered the storm and kept the Sachems off the board, soon evening the flow of the game as Wakefield got some chances of their own, including a nice pass from eight grader Caroline Lilley to fellow classmate Alexa McKim, forcing Winchester goalie Baile Lazarus to make a nice stop.

Following up on that momentum, a crazy scrum in front of the Winchester net after some great pressure from Mikayla Fennelly, Olivia Cameron and Hope Melanson just missed as Lazarus make multiple big saves and her mask came flying off in the chaos to halt play. Even though the score was still 0-0 it was a spirited sign from a Warrior team who wasn’t going to play for any ties.

Finally another nice stop from Boudreau, Winchester captain Tara Doherty finally put the Sachems up with 2:47 left in the period after getting a clean look from the slot.

The second ended, 1-0 Winchester, and one had to wonder how much energy Wakefield had, especially considering how much ice time players like defenseman Courtney Hill were logging. Hill was very impressive in this one. If it seemed like she never left the ice, that’s because she didn’t.

“Courtney might have came off for a minute in the first,” said Falite. “She wasn’t coming off tonight. All year long she’s been playing 40 out of 45 minutes. She was definitely one of the girls who left it all out there.”

It was a good example of the spirit that the rest of the Warriors picked up on, as Wakefield continued to skate hard in the third. Leading scorer Brooke Lilley kept the pressure up with her speed, creating some opportunities for the Warriors.

Defensively, forwards like Melanson back-checked well, and Boudreau continued to stand up to plenty of shots. Boudreau has been impressive all season as the starter, going through multiple tough battles in the Middlesex which seemed to prepare her well for this moment. Perhaps her best save of the night came just two minutes into the third when she made an incredible off-balanced save after a shot from the right dot and controlled the rebound, stopping play once again.

The Warriors had a hard time getting the puck through Winchester’s defenders in the third, and the Sachems made it 2-0 with 5:34 left after Whitney Krayer’s goal.

Wakefield pulled Boudreau with just under three to play, and true to form, gave it everything they had for the rest of the game, but Winchester held on for the win. Winchester deserves plenty of credit as their pressure was effective in all three zones, making it tough for Wakefield to maintain possession and get the puck to the net. The Sachems certainly closed this game about as well as you can.

Perhaps watching Winchester in the third will be a good lesson for many young Warriors, on a team that features multiple eight graders and underclassmen, but the truth is anything they want to know about building a successful program, they have learned from the seniors. Wakefield was certainly missing Vanessa Kaddaras in this one who was out with an illness. But the toughness and work ethic all season from Kaddaras, Cameron, Hill and Fennelly should be enough for the younger Warriors to realize what it takes to make it to the tournament and improve every year.

And that is what it means to give it everything you have.