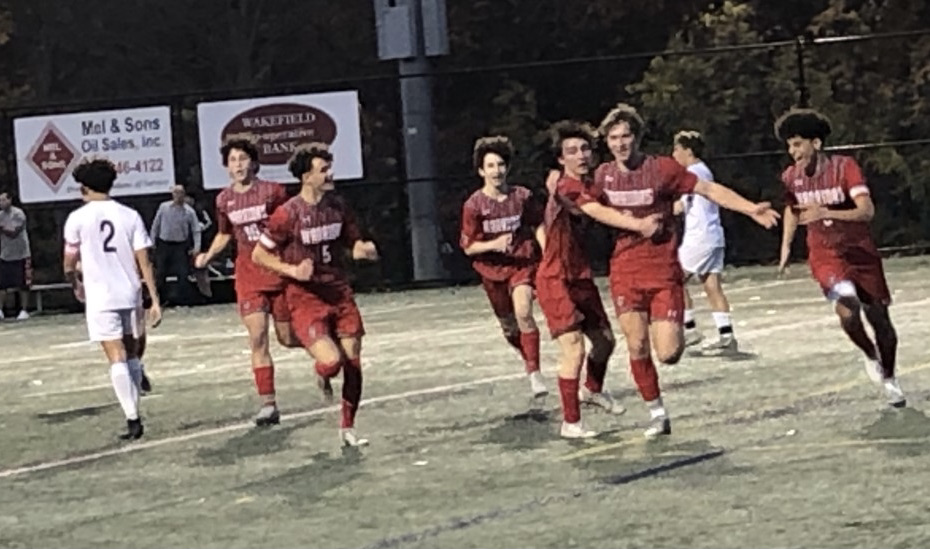 REID FESTEL (second from right) celebrates his game-tying goal with his teammates in the first half of Wakefield’s state tournament game against Marlborough on Saturday at Landrigan Field. (Courtesy Photo)

By CHARLES GAGNE and MARC GAGNE

WAKEFIELD — The Red Sea came out in full force at Landrigan Field for the boys’ home soccer playoff game Saturday evening and they were treated to an exciting, close, Div. 2 first round matchup between the No. 7 Warriors and a feisty, No. 26 Marlborough team.

The competition went down to the wire with the Warriors battling the whole way. The game ended in a 2-1 defeat for Wakefield, but there were many memorable moments, and the future is bright for this varsity team.

The game started off with a strong defensive play by JJ Faulkner when he headed the ball and cleared it down the field. Some scrappy play in the middle resulted in a free kick for Reid Festel soon after.

Wakefield had its first opportunity when a long ball booted by Ethan Margolis was tracked down by Darragh Casey but defended well for a corner kick. Nice defensive plays were made along the way, especially by Frankie Leone with a slide tackle to push the ball out of danger.

Lucas Kehoe won a free kick at one point on the right side, which was crossed by Leone and headed by Casey, but the Marlborough goalie made a good save.

Still early in the first half, a corner from Marlborough was kicked toward the front post and flicked by the head of a Marlborough player into the net to make the score 1-0 in favor of the visitors. Festel took a nice shot a few minutes later, but it was saved by the Panther goalie. 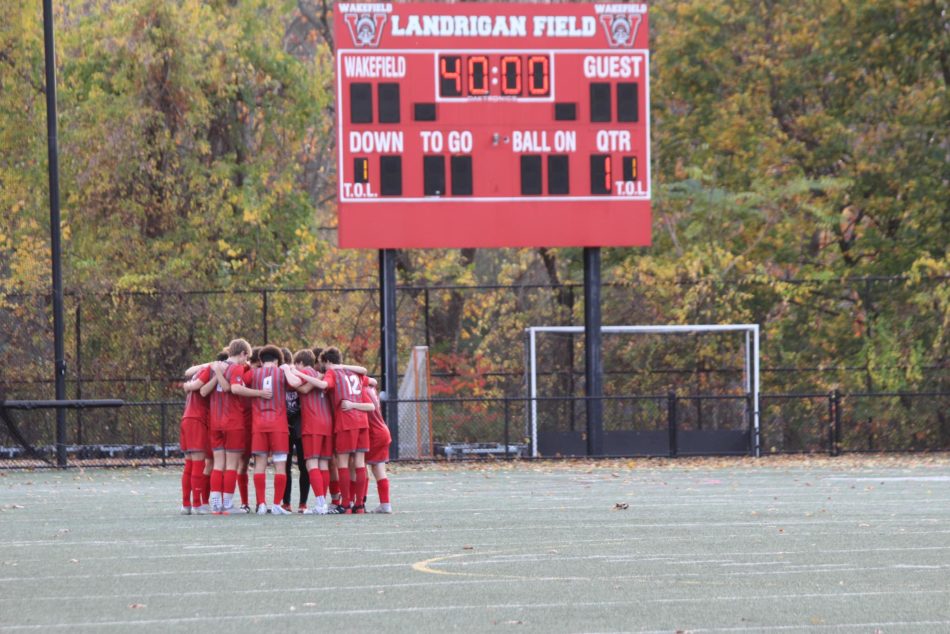 THE WARRIORS came up just short in a well-played state tournament game against Marlborough on Saturday at Landrigan Field. Wakefield finished a strong season up at 9-4-6 overall. (Charlie Festel Photo)

After a timeout was taken halfway through the first half, Wakefield had a few promising opportunities. Festel dribbled in the box and almost got a shot off, Casey won a corner kick and a free kick in a dangerous shooting spot was put just over the crossbar by Nemo Rizk.

Wakefield had one especially good chance on a cross by Margolis that was met with a great header by Kehoe, but it hit the crossbar and sailed over for a goal kick.

A few minutes later, however, the equalizer came for Wakefield when Festel shot from around the top of the box with his left foot and buried it into the bottom right corner. The Wakefield players celebrated and the crowd cheered.

Close to the end of the first half, a promising through ball by Festel toward Casey produced a scoring opportunity but a good save was made by the Marlborough goalie to keep the score tied 1-1. Right at the end of the half, a little bit of aggressive play turned into a light shoving match, but it was neutralized quickly by the referees and the halftime whistle blew a minute later.

The second half started with both teams hoping it wouldn’t be their last of the season. Throughout the second half, the free kicks were all Wakefield’s due to the rough playing style Marlborough continued to showcase.

Notable defensive plays were made by Faulkner, Margolis and Brian Purcell while crosses were made by Casey and Kehoe and shots were taken by Rizk and Casey.

One shot from Margolis toward the bottom left corner of the Panther net had the crowd on the edge of their seats, but the Marlborough keeper stayed sharp, making another diving save.

Neither team could make the play to get the ball in the opposing net and take the lead, so Wakefield called a timeout to regroup with 9 minutes left in the game.

The Warriors had the next opportunity when Marc Laverdiere dribbled around multiple Marlborough defenders near the edge of the box but was pushed over by a defender who was given a yellow card.

Wakefield couldn’t capitalize and with 6 minutes left in the game, Marlborough took the lead when a player dribbled up on the left and crossed it into the box. The forward in the box passed back to his teammate, who shot the ball into the bottom, right corner.

With the clock ticking, Wakefield gave it their best effort to score again and tie the game. Casey and Margolis continued to pepper the Marlborough goal with shots. On the last play of the game, Sean Hogan was pulled from the Wakefield net to help the offense on a corner kick taken by Leone, but the Marlborough players successfully defended this attack. The referee then blew the final whistle on this impressive soccer season for the Warriors.

Wakefield finished their 2022 season with an overall record of 9-4-6. They finished 2nd in the Middlesex League Freedom Division, just one game back of Melrose.