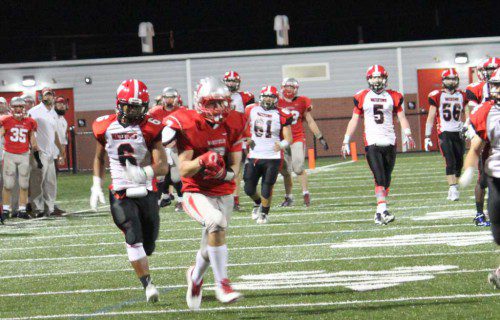 JUNIOR WR Alex McKenna (#7) is pursued by Watertown’s Luis Moradel (#6) during Wakefield’s game against Watertown on Friday night at Landrigan Field. McKenna had three receptions for 102 yards and helped set up one of Wakefield touchdowns.

WAKEFIELD — The Wakefield Memorial High football team played as near a perfect fourth quarter as a club can play. Unfortunately the Warriors didn’t play quite that well in the the first three quarters.

Wakefield rallied from a 20-0 fourth quarter with two touchdowns but its comeback bid fell short in a 20-14 loss against Watertown on Friday night in the Middlesex League division opener at Landrigan Field.

Wakefield had cut the deficit to six points as senior RB Zack Kane scored from a yard out and senior RB Kevin Russo caught a 70 yard TD pass from senior QB Ned Buckley.

After a block on a 36 yard field goal attempt by sophomore kicker Conor Kennell, who had already made field goals of 32 and 36 yards, the Warriors appeared to be in business as they got the ball at their own 24 with 2:55 remaining in the game.

Buckley gained two yards on first down and senior RB Paul McGunigle gained six yards on second down. Kane forged ahead for three yards to pick up the first down. Unfortunately for Wakefield, the drive stalled from there as four straight incompletions, one of which was dropped by a wide open receiver, resulted in Watertown taking over on downs and running out the clock.

“When we watch the film of this game, it’s going to hurt,” said Head Coach Steve Cummings. “We let an opportunity get away from us. We had two turnover inside our 30 which led to 10 points. We can’t continue to put our defense in that position. Also, their QB found a crease on the outside on one of his runs and took it 93 yards for the touchdown.

“I’m proud of our guys,” added Cummings. “We were still in it at the end. We played as perfect a fourth quarter as we can play and we had to be perfect. We came up just short. We left a lot on the field.”

The Warriors outgained Watertown in total yards, 324-200. But the Red Raiders cashed in on two of three Warrior turnovers while not turning the ball over themselves.

McGunigle led the way in rushing for Wakefield with 89 yards on 14 carries with one of those being a 51 yard run.

In the passing game, Buckley completed seven of 18 passes for 176 yards and one TD. He was also intercepted once.

Junior WR Alex McKenna made three receptions for 102 yards with one of his catches being a 52 yard reception setting up Wakefield’s first score. Also Russo had the 70 yard TD catch as those two receivers accounted for most of the yards the Warriors gained through the air.

For the Red Raiders, junior QB Deon Smith gained 183 yards on 20 carries and scored both of Watertown’s touchdowns.

Watertown went three and out on its first possession and Wakefield took over at its own 26 yard line after an 11 yard return by Beck. But on the first play from scrimmage, junior RB Carmen Sorrentino fumbled after gaining four yards as Farid Mawanda recovered the loose ball at the Wakefield 30.

After a two yard loss by senior Robert Kennedy, Smith broke a 32 yard run for the TD. Kennell added the extra point to give the Red Raiders a 7-0 lead with 7:29 remaining in the first quarter.

The Warriors moved the ball on their next drive which started at their own 20. Wakefield earned three first downs with Kane moving the chains by gaining three yards on a second down and three after a seven yard run by Sorrentino. The second first down came on a fourth down and one play as the Warriors drew Watertown offside to move the ball to the Wakefield 45. Buckley gained seven yards, Beck ran for two and McGunigle gained seven to bring the ball to the Watertown 39.

McGunigle had runs of two yards on two consecutive downs and Kane caught a one yard pass from Buckley to set up a fourth down and five from the Watertown 34. On the first play of the second quarter, Buckley’s fourth down pass was intercepted by junior Isaac Huff as the Red Raiders took over at their own 32.

After both teams traded punts, Watertown took possession at the Warrior 38 with a huge shift in field position which favored the visiting team. Smith had runs of five yards and three yards. Junior Zach Rimsa had runs of five and three yards. On second down, Smith attempted his only pass of the game while rolling out to his right and the left-hander’s pass fell incomplete out of bounds.

Smith then gained six yards which wasn’t enough for a first down. On fourth down and one play from the Warrior 16, Kennelly kicked a 32 yard field goal to put Watertown up 10-0 with 3:55 left in the second quarter.

The Warriors took over at their own 22 after a 17 yard kickoff return by McKenna. Wakefield then sustained an 11 play drive as it moved the ball into the red zone.

Key plays on the drive were a two yard run on a fourth down and one play by McGunigle. McKenna hauled in a 43 yard pass on third down and seven play to bring the ball down to the Watertown 21. McKenna then caught a seven yard pass to move the ball down to the 14. But the drive stalled from there as three straight incompletions resulted in Watertown taking over on downs and killing the clock to take the 10 point advantage to the locker room at halftime.

Wakefield got the ball to start the third quarter and fumbled the ball on its second play with Buckley losing the ball at the Warrior 26. Erick Yax recovered the ball for Watertown.

After a false start penalty, Smith gained eight yards. Rimsa was dropped for a two yard loss. Smith then gained six yards setting up a fourth down and three situation from the Wakefield 19. Kennelly kicked a 36 yard field to put Watertown up 13-0 with 7:57 left in the third quarter.

The Warriors then sustained a seven play drive and moved inside the red zone once again. Starting at the Wakefield 26, McGunigle broke a 51 yard run to bring the ball down the Red Raider 23. McGunigle gained three yards and then Kane had runs of eight yards and three yards. McGunigle had a gain of four yards to bring the ball to the 5. On third down and three, McGunigle was stopped for no gain and Buckley’s fourth down pass was incomplete as Watertown took over on downs.

“We need to play better football in big spots,” said Cummings. “Two times we had the ball deep in their end and came away with no points.”

What made the missed chance even more painful is that two plays later, Smith broke a 93 yard TD run down the left sideline. Kennell added the extra point to give Watertown a 20-0 lead with 3:15 left in the third quarter.

Wakefield took possession of the football at its own 28 after a 19 yard kickoff return by McKenna. From there, the Warriors mounted a seven play scoring drive to get on the scoreboard.

Buckley had runs of five and two yards. McGunigle then gained a yard on third down setting up a fourth down and three play from the Wakefield 36. Again, Watertown jumped offside giving the Warriors a first down. Buckley then ran for four yards as the teams switched sides for the fourth quarter.

On the first play of the last frame, Buckley found McKenna with a 52 yard pass down the left side to set up a first down and goal from the Watertown 3. McGunigle gained two yards on first down. On second down, Kane plunged into the end zone from a yard out.

The Red Raiders then picked one first down on an 11 yard run by Smith. However Smith was stopped for two yard gain on fourth down and three from the Warrior 32 as Wakefield took over on downs.

Wakefield scored on the very next play as Buckley found Russo on a fade route down the left side which was good for 70 yards and the TD. McGunigle kicked the extra point as the Warriors cut the lead to 20-14 with 4:57 left to make the contest very interesting down the stretch.

The Warriors nearly gave up a TD on the ensuing kickoff as Smith returned the kick 60 yards and was tackled at the Warrior 18 by Eric Smith. Rimsa was stopped for a yard gain, then Smith was stopped for no gain and a yard loss on third down. On fourth down and 10 from the Wakefield 18, Kennell came out to attempt 36 yard field goal. The kick never got any height and was swatted away by the Warriors as they took over at their own 24.

Despite one last opportunity, Wakefield was unable to earn more than one first down as it turned over the ball on downs ending any hope of a comeback victory.