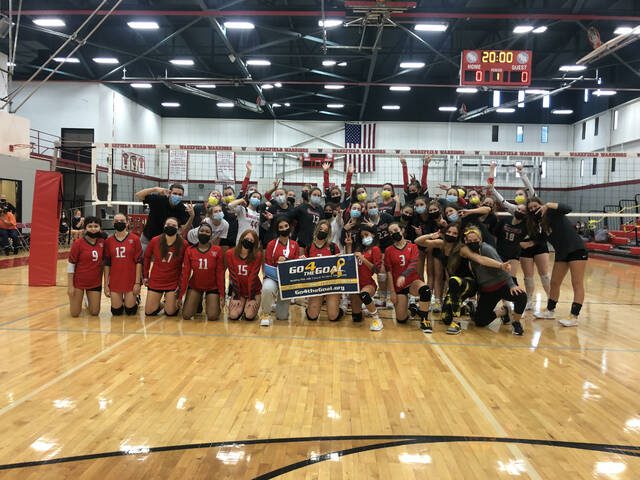 WAKEFIELD — The work for the Wakefield High volleyball team’s match against Beverly on Sept. 24 started off the court.

The Warriors donated their own money, raised funds and wore yellow shoelaces to generate support for the Go4Gold Lace Up 4 Pediatric Cancer team.

On the court, Wakefield beat a strong Beverly team 3-1, bringing their record to 5-3 on the season.

The Warriors pushed that record to 6-3 with a 3-0 win over Stoneham on Monday and then to 7-3 with a 3-2 road win over Burlington, the first in program history. A full recap of that match will appear next week.

“This was the best match from beginning to end that I have seen our team play,” said head coach Kayla Wyland. “We have been working on starting strong from the first point in the first set, when things do not seem as intense. We were having a challenge starting from that first point and found ourselves playing catch-up in the first set of many of our matches. The past few games after really focusing in on that, we really turned it around and have been lighting a fire right from the first point. This has been causing damage for the other teams.”

“It was an all around team effort – from our more consistent yet aggressive serves, our net play and our defense,” said Wyland. “Hailey Ogier (senior setter) had one of her best nights I have seen. This really allowed for our offense to shine through.

“Maddy Seabury has been consistently dominant at the net. Her natural leadership makes the team always ready to go throughout the match. Her blocking has been unbelievable this year, alongside our new middle and right side this year: Mia Forti and Savannah Cummings. These three blocking really shut down Beverly’s main outside option and helped take pressure off of our back row.”

Seabury had four kills and seven blocks against the Panthers.

“Our defense is a force this year with Claire Donahue, Hannah Kelley, Amanda Nett, and Mia Desruisseaux,” said Wyland. “They communicate, are scrappy and are some of the most driven athletes I have had the pleasure of working with.

“This was a huge win for us. Beverly has been really strong this year, so hats off to them for a great match. Now, Wakefield has more business to take care of and a lot more work to do.”

That work continued on the road against Stoneham where the Warriors swept the Spartans with scores of 25-6, 25-9 and 25-17.

“We have been working on consistency and playing smart but hard and we did exactly that against Stoneham,” said Wyland. “Our consistency and composure was strong from the first point to the last. For this reason, we were able to dominate.”

With their win over Burlington, Wakefield is now second in the Freedom Division behind Melrose. The Red Raiders beat Wakefield 3-0 on Sept. 23. Melrose has yet to lose a set this season, though Wakefield came close in the third set before falling 25-22.

The Warriors host Woburn on Tuesday at 6:30 p.m. Wakefield hasn’t defeated the Tanners since the 2014 season.