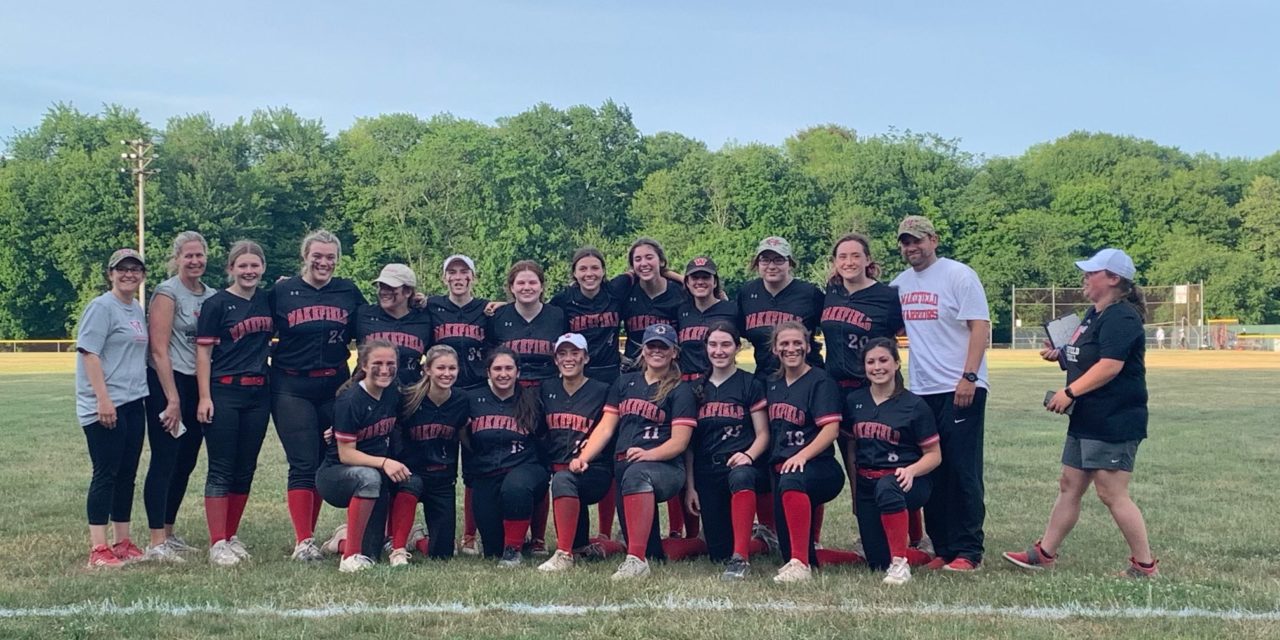 THE WARRIORS celebrate their 7-2 win over Stoughton in the first round of the D2 tourney. Wakefield travels to No. 1 Billerica today at 4 p.m. for a Sweet 16 matchup. (Wakefield Softball Photo)

Advance to meet No. 1 Billerica in Sweet 16

STOUGHTON — The Wakefield High softball team probably had a couple reasons to grumble about having to deal with 93 South’s rush hour traffic on their way to Stoughton High yesterday for a 5 p.m. first pitch in a Div. 2 state tournament first round matchup.

For one, the 17th-ranked Warriors went 14-6 this season compared to the 16th-ranked Black Knights who were 11-9.

Any team would feel like they deserved to host the game instead, but rather than complain, Wakefield played the hand they were dealt and cashed in with an impressive 7-2 victory.

“I couldn’t be more proud of the girls and how they played,” said Wakefield head coach Chris Tolios. “They stepped up to the moment and executed as well as we have all year.”

With the win, Wakefield advances to play No. 1 seed Billerica in the round of 16 today, 4 p.m. at Marshal Middle School.

Competing in their first state tournament game since 2016, the Warriors were unafraid of the moment, thanks in large part to starting pitcher and senior captain Nora Leach who earned the victory with a complete game effort, scattering 7 hits and striking out 2 in 7 innings. She allowed zero earned runs.

“First kudos is the easiest one, that goes to Nora Leach for her performance in the circle and her counterpart Emma Kane behind the plate,” said Tolios. “Those two did a great job to keep (Stoughton’s) bats quiet.” 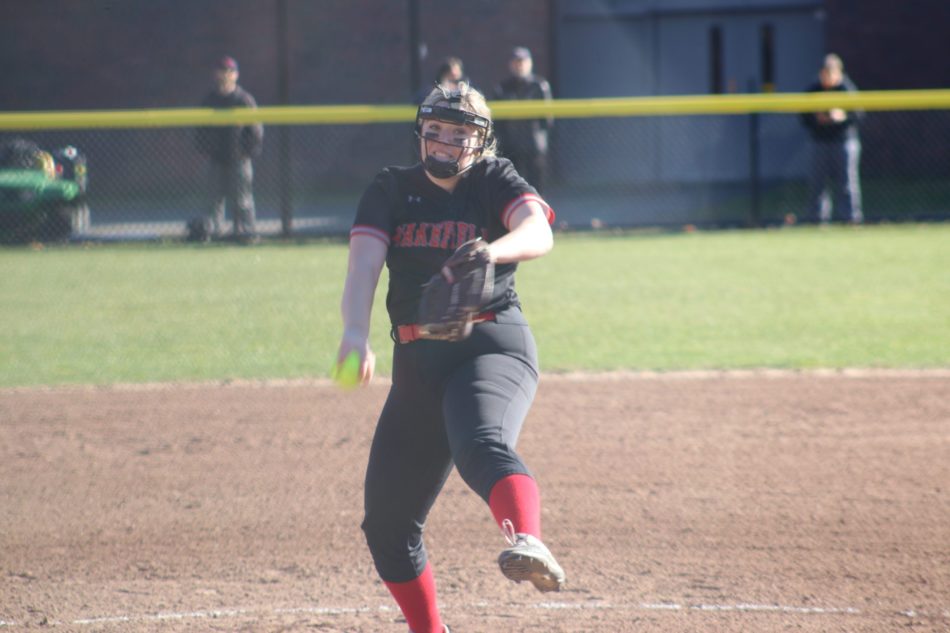 NORA LEACH pitched a complete game to earn a 7-2 victory for Wakefield on the road over Stoughton in the first round of the Div. 2 state tournament. Leach scattered 7 hits, struck out 2 and allowed no earned runs. She also went 2-for-4 with an 2-RBI triple. (File Photo)

Both players were impressive with the bat as well.

Kane went 2-for-3 with two separate RBI base hits.

Leach hit a clutch, two-run triple in the 3rd inning to extend Wakefield’s lead. She went 2-for-4 on the day.

Those timely hits continued in the 5th when senior Emma Johnsen came through with another RBI knock to put her team up 5-0.

“You could feel the momentum shift and the confidence start to grow after that,” said Tolios, as it became clear to the Warriors that they were only nine outs away from winning a state tournament game.

Leach continued to pitch well while the defense made plenty of key plays.

“We made big defensive plays that killed any rally Stoughton started,” said Tolios.

Wakefield continued to stick to the game plan and as the Black Knights attempted to start a comeback with two runs, the Warriors tacked on two more of their own and confidently closed out their opponents.

“It was a fun game to be a part of and I’m happy for the girls,” said Tolios. “They earned it and deserved it.”

Many of the Warriors promptly returned home to Landrigan Field where they were welcomed with cheers by the Red Sea as they joined the crowd to make some noise for their classmates on the girls’ lacrosse team who also went on to win their first 2022 state tournament matchup, 14-1 over Amherst-Pelham.

As they spread the news to friends that they would be traveling to meet top-seed Billerica the very next day, again, there was no complaining about the quick turnaround – just excitement for the opportunity no matter how challenging it might be.

The No. 1 Indians went 13-7 this year playing a schedule littered with talented, Div. 1 opponents. They beat No. 32 Notre Dame of Hingham 15-1 in the first round yesterday.

“We have a big test coming up tomorrow with Billerica so we need to turn the page quickly and dial back in,” said Tolios.