Warriors can clinch a share of M.L. title with a win over Burlington 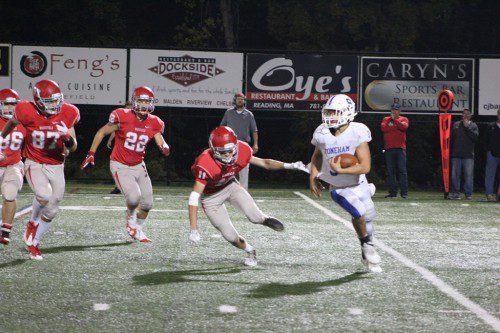 BOBBY KEEGAN, a junior (#11), grabs the jersey of Stoneham quarterback Tre Pignone (#3) as teammates Brendan Coughlin (#87) and Bobby Young (#22) close in as well during Wakefield’s 20-13 triumph over the Spartans. (Keith Curtis Photo)

WAKEFIELD — The Wakefield Memorial High football team played two Middlesex League Freedom division rivals that are power running clubs and the Warriors defeated both foes. Now, the Warriors are preparing for a Burlington team that plays a completely different style of football.

The Warriors and Red Devils meet in a league contest tomorrow night at 7 p.m. at Landrigan Field.

Wakefield enters the game with a 3-0 league record (3-2 overall), while Burlington is 0-3 in the league and 1-4 overall. The Warriors can clinch a share of the M.L. Freedom division championship with a win tomorrow night.

While there is a big difference in records, there is no way the Warriors can take the Red Devils lightly especially with what is on the line. Burlington played Melrose and Watertown tough and rallied from a 28-0 deficit against Stoneham to make a game of it. The Red Devils also played a highly-ranked Billerica team in non-league play.

“Stoneham was 4-0 headed into last Friday night’s and the program has been successful the past few years. To beat that caliber of a team was good for our team,” said Coach Steve Cummings. “We got down in the game, but pushed through. We made the big plays when we had to.

“We got them in downs and distances which they didn’t want to get in. They like to gain four or five yards on first down and keep second and third down distances short. That’s their style. But we got them in a lot of third down and eights and forced them to pass which is something they don’t want to do. We knew if we did that, we could have success.”

Wakefield expects a Burlington team that plays a much different style than the Spartans and Wildcats did.

“Burlington couldn’t be more different. They will show you different formations and their quarterback may just be the most talented in the league arm-wise. The Watertown quarterback and Tre Pignone are really good runners, but (Dylan) Bonfilio may be the best overall quarterback we’ve faced since the Marblehead quarterback. He is polished and he can beat you with his legs and his arm. He is not a running quarterback but he is mobile. He throws a great deep ball and shows a lot of poise.”

Bonfilio, a senior, is a three year starter for the Red Devils and is one of Burlington’s top playmakers. Last week against Watertown, Bonfilio threw for 169 yards and two touchdowns. With his legs, Bonfilio gained 41 yards and scored a rushing TD.

Zach Cyr, Burlington’s top running back, tallied 197 yards from scrimmage and scored three touchdowns. He caught both of Bonfilio’s touchdown passes and had seven catches for 107 yards. On the ground he had 91 yards on four carries and scored a TD rushing as well.

“Wilmington and Stoneham wanted to pound the ball right at us. Burlington will spread us out,” said Cummings. “It will be a tough game. Burlington is 1-4, but they battled Watertown and Melrose tough. They also played a Billerica team that is battle tested and is a good football team. They fell behind 28-0 against Stoneham but their quarterback brought them back. They were a two-point conversion away from getting to within a score. So we can’t get comfortable against them.”

Wakefield has a lot on the line.

“While the players were lifting and preparing during the offseason, one of the goals listed in the weight room was to win the league title,” said Cummings. “That was a big goal of ours. The players know we are on the cusp of getting a share of the league title. We may not be be able to solidify it until Thanksgiving when we play Melrose.”

When the Warriors played Burlington a year ago, they turned the ball over three times which led to 21 of the Red Devils 28 points. All of the points came in the first half as Wakefield lost 28-0. It is a game many of the returning Wakefield players remember all too well.

While Wakefield has become better and better each week, Burlington has endured adversity with the suspension and subsequent resignation of its long time head coach, Shawn Maguire. Maguire was suspended on Sept. 28 for allegedly being verbally abusive to the Burlington players. The veteran head coach resigned his position yesterday. Assistant coach and defensive coordinator George Balian has handled the head coaching duties for the Red Devils for the past two games.

“Shawn has some good assistant coaches and I’m sure that hasn’t been easy for them. They’re high school kids,” said Cummings. “It’s unfortunate, but I’m sure they will come out and battle. They’ve been able to soldier on. Their record doesn’t indicate how tough they have played.”

Tomorrow night’s game is also the end of a three-game home stand for the Warriors. Right now, they have an away game at Winchester next week and won’t be home again until Thanksgiving Day. Getting a win this week and next week to end the regular season may result in a home playoff game or two. Right now, there are a numbers of teams bunched together in Div. 2A North and the next couple of weeks will be huge for seeding purposes.

“This is a big opportunity for us. We’re focused on Burlington,” said Cummings. “The kids are excited. We’ve been doing a lot of the little things right.”

If Wakefield can continue the consistent play, then they may just gain a share of the M.L. Freedom division title.