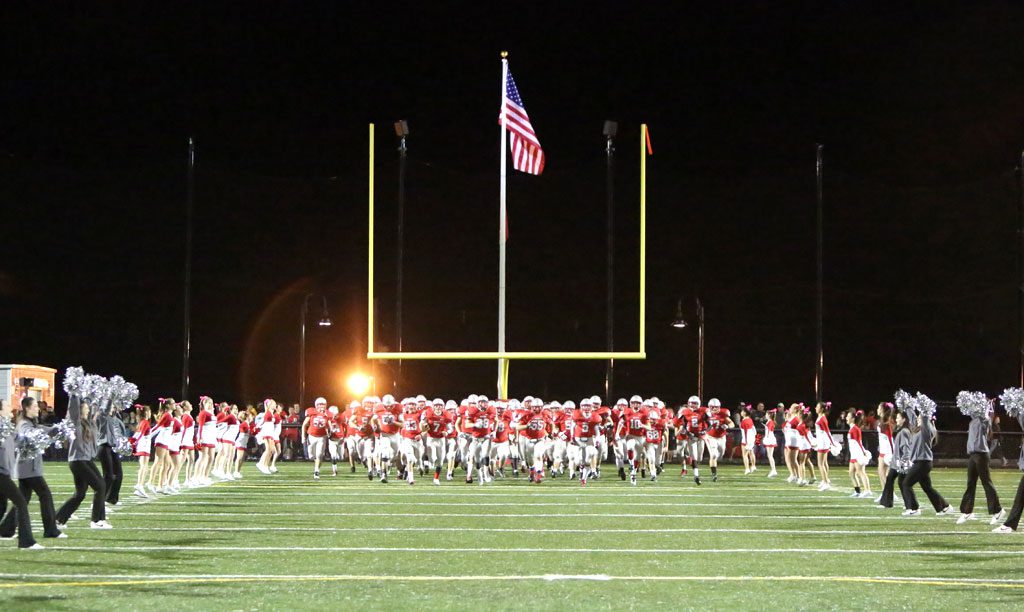 THE WARRIOR football team enjoyed its return to Landrigan Field last week as it shut out Wilmington by a 21-0 score. Wakefield is hoping the home field advantage works again in its favor tomorrow night against Stoneham. (Donna Larsson File Photo)

WAKEFIELD — Being back at Landrigan Field did wonders for the Wakefield Memorial High football team last week and the Warriors are hoping the home field advantage will work in their favor once again when they host Stoneham tomorrow night at 7 p.m. in a Middlesex League Freedom division contest.

Wakefield blanked Wilmington, 21-0, last week to end a two-game losing streak and increase its record to 2-3 overall and 1-2 in the M.L. Freedom division. The Warriors will be hoping to even their record overall and in the division with a win tomorrow night.

Stoneham enters the game with a 2-3 overall record and 0-3 record in the M.L. Freedom division. Despite the Spartans’ record, Warrior head coach Mike Boyages believes that Stoneham is much better team than the record shows.

“We’ve seen a lot of Stoneham on tape and their record is a little deceptive,” said Boyages. “They have been moving the ball up and down the field but have struggled in the red zone. Stoneham is a good team and we’ve had some competitive games against them in the past. They have some tough kids and they play hard.”

The Warriors lost by a point, 24-23, to the Spartans last year for their first defeat against Stoneham since 1994. Wakefield will be looking to turn that around tomorrow night. Also Wakefield wants to win out and boost its playoff seeding. A win tomorrow night will help do just that for the Warriors.

“We’re looking forward to the game. Last week’s win was a real confidence booster,” said Boyages. “We’re pretty healthy other than a few bumps and bruises. I hope the team can build on what did last week and get better and better. We beat a Wilmington team that had a good record coming in.”

Like Wilmington, Stoneham leans heavily on the running game and will seek to impose its will up front against the Warrior defense.

“Offensively, Stoneham plays in one set,” said Boyages. “Offensively we don’t know if they are going to show us a different formation but our defensive coordinator Steve Cummings is getting us ready for that. They run the old Everett offense with two tight ends and two running at the wings with one single back behind the quarterback. The formation is similar to our T-formation except they put two running backs at the wings instead of in the backfield. Stoneham also has some good size up front.

“Stoneham is a young team with a lot of sophomores and even freshmen playing. They are only going to better and better. We need to be wary of them,” added Boyages. “We want to slow down their run game and force them into pass situations on third down like we did against Wilmington.”

Boyages is also glad Wakefield is at home. Not only did the Warriors play well last week before the home crowd but Boyages believes the home field advantage could loom large since Wakefield plays on turf and Stoneham plays on grass, one of the two remaining grass surfaces in the Middlesex League.

“I’m glad the game is at home on turf,” said Boyages. “With the rain expected tonight, it could be pretty wet over there on the grass field. We’re looking forward to the game and we hope we can get back to .500 with a win.”