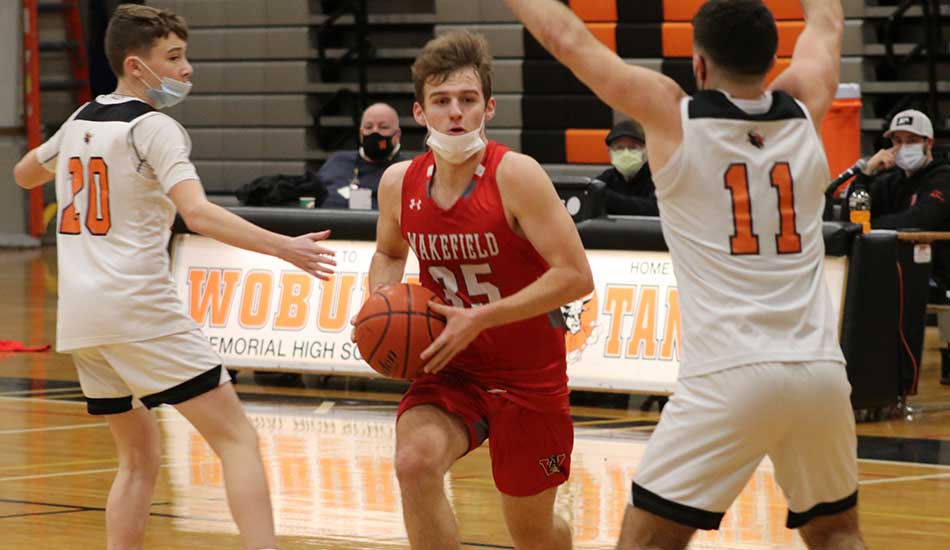 WAKEFIELD — The basketball bounced on the floor as the Warriors ran up the court. Down by two halfway through the fourth quarter, they needed to get something going to take back the lead. Senior captain Andrew Quinn was sprinting up the court as he was passed the ball. Quinn caught it and shot it into the hoop for a 3-pointer to take the lead. The team sprinted back down the court and got the stop. On the next possession, Quinn ran up the court with the ball and nailed a pull-up 3 to go up by four points.

On Friday night, the Wakefield Warriors boys’ basketball team hosted the Watertown Raiders in a Freedom Division showdown. After coming off a big win against Woburn on Tuesday, the Warriors were entering the game one game above .500 and with a lot of confidence. Their season trends were not with them, having not strung together two straight wins all season and that did not change on Friday.

Wakefield lost to the Raiders, with a final score of 54-44. Although the score shows a 10-point loss, the game was close throughout until the last four minutes of the game.

The emphasis set by head coach Colin Halpin on playing a full 32 minutes had not been fulfilled.

The ball was thrown up into the air for the tip-off and the Raiders won it. Coach Halpin’s defense, the pride of the team, was on display first. The defense was on display for a while as Wakefield went scoreless for the first four minutes of the game until Wilkinson hit a layup to get the Warriors on the board.

Following the basket by Wilkinson, coach Halpin called a timeout. The Warriors were down 8-2 with 4:17 left to play in the first quarter. The timeout was crucial in getting back into the game as the Warriors proceeded to score right out of it with a layup by sophomore De’Ari Burton (6 points).

On the following play, Burton did the same thing, driving hard to the basket and getting the points. The Warriors were playing much better on the offensive side, and their defense was holding Watertown during the stretch. To tie the game at 8-8, Wilkinson made a layup after driving to the basket. The Warriors found a groove late in the first quarter as Margolis made a hard-fought layup to pull ahead by two points.

With the score now tied, Wilkinson was passed the ball and drove to the rim to take back the lead, now ahead 17-15. The back-and-forth continued as Watertown hit two shots to go ahead by two points, but Wakefield answered as Wilkinson tied the game at 19 with a layup on a pass from Margolis.

Watertown proceeded to pull ahead as the half came to a close. Down four points with a little under a minute left to play, Quinn passed the ball to Margolis who drilled an open 3 to close out the quarter with a score of 23-22, Watertown leading.

The Raiders opened the second half with a quick basket, but Wilkinson traveled the length of the court to get a layup to make the game 25-24. After a Watertown basket, DiFazio was then fouled and made a free throw to get the lead down to two points. Senior Sean Russell stole the ball and passed it up to Quinn who made the basket to tie the game at 27.

Watertown proceeded to go on a run, scoring five straight points to jump ahead. Junior Ian Dixon (4 points) was fouled and made both free throws to drop the lead to three. Senior Matthew Sellers hit Russell in the paint who shot the ball for a two-point score.

Now down two with a minute left in the quarter, Wilkinson caught the ball from a Warrior pass and drilled a 3-pointer to go up 34-33. The quarter ended with that score and the Warriors looked to hold their lead in the fourth quarter.

The Raiders scored first, but Dixon answered with a layup of his own. Watertown then hit a 3-pointer to go up 38-36, but Quinn nailed two back-to-back triples to take a 42-38 lead. Watertown then called a timeout with 4:43 left on the clock. The next few minutes were detrimental for the home team as the Raiders went on a 16-2 run to end the game, ending the game with a final score of 54-44.

After losing in a tough game against the Raiders at home, the Warriors fell to 4-4 on the season.

“I think the game against Belmont is going to be a huge game in the league,” said Coach Halpin. “I think we will get back to the basics and back to what we need to do.”