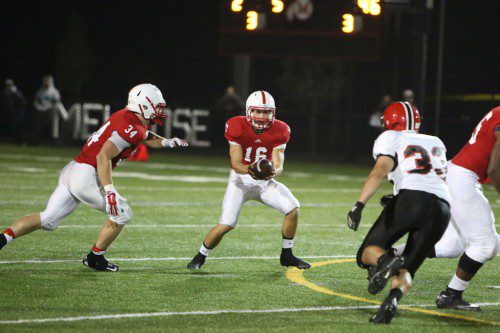 THE MELROSE Red Raider football team provided plenty of offense but fell just shy of taking victory over Watertown in a 28-26 loss last Friday at Victory Field in Watertown. The 4-2 Raiders look to get back in the winning column when they host Wilmington this Friday, October 17th at 7:00 at Fred Green Field. (Donna Larsson photo)

MELROSE — The Melrose Red Raider football team saw a fourth quarter revival fall short against a now undefeated Watertown during a 28-26 loss on Friday, Oct. 10 at Victory Field in Watertown. Turnovers and failed two point attempts by Melrose helped take the game out of the Raiders’ hands, despite a second half comeback that nearly saw overtime play.

The good news was the welcomed return of senior captain Jack Hickey, who was back in uniform after an injury sustained Sept. 19. The multi-talented Raider was good for a touchdown which gave Watertown its first deficit of the season in the closely-fought battle of the Raiders. Melrose senior Colby Andrew delivered two TDs and Brian McLaughlin one, which together helped Melrose score more offensive points than any team has against Watertown this season. Melrose senior quarterback Jake Karelas remained very effective with a nice passing game, going 18-26 and throwing for over 230 yards with two TD passes.

With the loss, Melrose now sports a slightly deceptive record of 4-2 overall (2-1 league) but nonetheless remain very competitive in Div. 3 Northwest. It’s worth noting the Red Raiders are just four points from being undefeated.

But on Friday two turnovers (their first of the season) cost Melrose touchdowns, including a fumble in the opening minutes of the game inside their own 10. That led to Watertown’s Zachary Rimsa rushing into the end zone to give Watertown an instant 7-0 lead. Melrose traded possessions with Watertown before senior Brian McLaughlin outran Watertown defense on a rushing touchdown from 39 yard line in the second quarter. Melrose attempted a two point conversation but came up short, leaving Melrose 7-6 and chasing a point.

Watertown’s punting game came up short over the night and it often put Melrose in great field position, which they used to their advantage in their next possession at their own 44-yard line. Melrose senior Jake Karelas tossed a 42 yard bomb on third down connecting with Melrose senior Will Caffey along the sideline. Melrose senior Jack Hickey sealed his return with a 12-yard run to put Melrose up for the only time of the game. Another attempt at a two point conversation by Melrose failed and the Raiders remained ahead just 12-7. But Watertown ran a 10-play drive to score with just 25 seconds to go in the half on a Nick Giordano keeper from the 3-yard line, giving Watertown the 14-12 edge. Watertown Nick Giordano passed and rushed effectively, carrying the ball seven times for over 120 yards and scored two touchdowns.

Both teams traded possessions in the third before Giordano drove Watertown down field for 75 yards and handed off to Rimsa for a touchdown that gave Watertown a 21-12 lead at the start of the fourth. But Melrose fought back with a 13-play drive culminating in a Karelas 20 yard touchdown pass to Colby Andrews. Melrose made their extra point and narrowed the gap at 21-19. Both teams continued to swap touchdowns in the fourth quarter. Watertown struck first after a Karelas pass was intercepted by Watertown’s Austin Farry with slightly over two minutes to go. Giordano then ran for a 81-yard touchdown, giving Watertown a 28-19 advantage.

With just 1:36 left in the game Melrose fought valiantly in a drive that totaled 60 yards for Karelas. He reached Andrews on a touchdown pass, putting Melrose in firing range down by two but at mercy of the clock. An attempted onside kick was recovered by Watertown which prevented any overtime scenario.

This week Melrose hosts the Wilmington Wildcats at Fred Green Field in Melrose for a 7 p.m. showdown. The Wildcats just suffered a 21-0 loss to Wakefield last week but remain 2-1 in the Middlesex Freedom League.