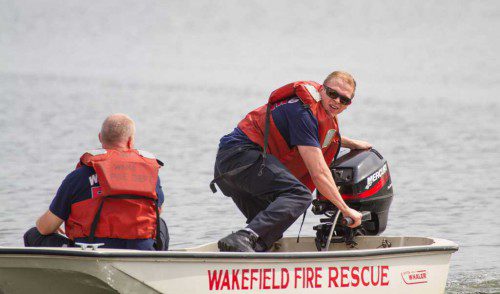 “This is in-service training we do every year,” said Sullivan. “We got a bit of a late start this year since we’ve had a lot going on in the department.”

Training is done to help people whose boats or windsurfing equipment overturn. Though these incidents do not happen every day, they do occur and firefighters dispatched to a rescue mission must know how to save lives.

As an example, in January 2013, a man trying to skate sail in the area of Hartshorne Cove near North Avenue and Church Street escaped injury and possible drowning when he fell through the ice 350 feet offshore. Sullivan estimated the area to be between 10 and 12 feet deep and the ice was only one to two inches thick. Fortunately for the man, he was able to walk to shore and the rescue boat was not needed.

In another incident that took place in April 2012, a 34-year-old man from Melrose died from injuries he suffered after a near-drowning incident at Breakheart Reservation.

Wakefield’s Fire Department responded with a launch boat and other apparatus along with crews from the Saugus Fire Department. The man survived the ride to the hospital but was later pronounced dead.

Sullivan said that cold water survival suits are stored in fire trucks and on both rescue boats and that fire crew members are trained to put them on quickly in the event of an emergency.

“The suits are tethered to the shore,” he said.

Sullivan said that though both boats were manufactured before the year 2000, they are both in good condition.

“We made repairs to the rubber boat and it’s running fine,” he said.

As new technology is developed, new training occurs. For example, Sullivan mentioned thermal imaging cameras used to pick up body heat and can “see” through smoke.

Next week, training will continue Tuesday through Friday with “pump training” at Crystal Lake.

“The training will be held for most of each day,” said Sullivan.

Some people have asked Wakefield’s Fire Chief what they should do if they see someone in trouble in deep water.

In addition to yesterday’s training, the Fire Department responded to nine calls on Thursday, five for medical aid.

Firefighters went to the intersection of North and Richardson avenues at 12:15 p.m. to assist at the scene of a collision and 650 Main St. at 3 p.m. to clean up a gas leak from a disabled motor vehicle. This morning at 8:40, firefighters went to 90 Bay State Rd. for a fire alarm set off by workers.