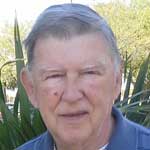 SALEM — William James Mailhoit passed away peacefully surrounded by his family on Friday, May 29, at Salem Hospital.

“Bill” was an amazing man who loved football, especially the Patriots, and his trips to the casinos. He would talk passionately about the city of Salem, where he lived all his life. All of those passions couldn’t compare to the love that he had for his family, especially his grandchildren.

Bill attended Salem schools and graduated from Salem High School in 1952. Upon graduation, he enlisted in the U.S. Navy and served at the Naval Base in Norfolk, Va. during the Korean War. After completing his tour of duty, he became employed at the United Shoe Machinery in Beverly where he worked until he retired in 1993.

He spent his retirement enjoying gardening, going out to eat and spending time with his grandchildren and family.

He was predeceased by his parents, Albert and Nellie (Holloran) Mailhoit.

His funeral will be held on Thursday at 9:15 a.m. from the Murphy Funeral Home, 85 Federal St. (corner of North Street), Salem to be followed by a funeral Mass at 10 a.m. in St. Thomas the Apostle Church on the Salem-Peabody line. Relatives and friends are respectfully invited to attend.

Visiting hours will be Wednesday from 4 to 8 p.m.

Interment will be in Greenlawn Cemetery, Salem.