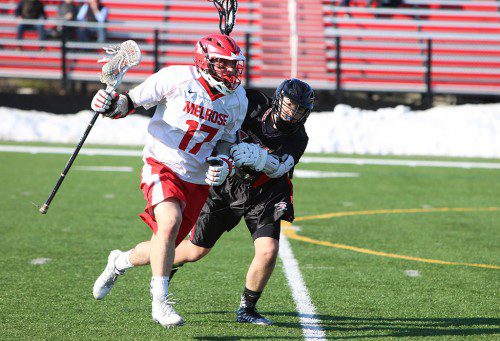 MELROSE — The Melrose Red Raider boys’ lacrosse team is sitting pretty after back to back wins over the weekend over always-tough Middlesex Large teams.

Melrose (2-2) began their road trip on April 8 when they took on Belmont (2-2). It was an uneven match and they clobbered the Marauders 12-4. Balanced scoring came from  junior Jack Mandraccia (2 goals, 2 assists) and sophomore Corbin White (2 goals). Leading the Raiders in scoring so far this season are Siebert (10 goals) and Zac Phipps (who leads in points).

Two days later they faced Arlington (2-2) on the road and enjoyed a 6-5 overtime thriller  thanks to a game-winning goal by Jack Siebert (2 goals). Melrose was down two goals with just four minutes left when the Raiders launched a series of offensive attacks that resulted in a sudden death overtime win. Down 5-3, Melrose benefited from a goal by Siebert to close the gap, while junior Ryan McDermott set up the tying goal made by junior Jack Mandracchia who evened it up at 5-5, giving Melrose new life and forcing overtime. It was Siebert who struck again in sudden death, lifting Melrose 6-5 for their most exciting win of the season.

“It was an awesome win and Arlington is always a competitive team so winning in sudden death was fantastic,” says Melrose head coach Matt James.

At the net Melrose’s Connor Locke logged eight saves, including a game-saver with four minutes to go that would have taken the game out of Melrose’s hands. James is more than pleased with his job as goalie. “He did very well at the net in both games,” says his coach.

James also credits the depth of his midfield, that works two full lines and tips his cap to senior captain Zack Mercer for his outstanding work on draws. “Zack has won about 3/4s of all his faceoffs. He is such a great leader for this team.”

The coach also noted the stellar efforts of middie Cam Hickey. “Cam is a great football athlete who just loves to compete. He brings the game to another level.”

Melrose will get a taste of Freedom League teams this week when they play Stoneham on Wednesday (post deadline) and host Wilmington under the lights of Fred Green Field on Friday night at 7 p.m. At press time, Melrose (2-2) sits behind 4-1 Wakefield and 5-0 Watertown in the Freedom League.