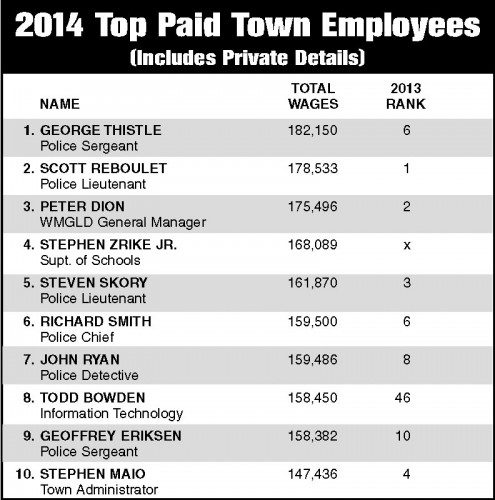 WAKEFIELD — The Wakefield Municipal Gas and Light Department had the most employees on the 2014 list of the town’s top wage earners with 18, down two from the previous year.

But the 17 police making the list took many of the top spots, thanks in part to private detail work.

In addition, due to a manpower shortage, the town’s Information Technology Department placed its two employees in the first 20 places on the list of the 50 top paid Wakefield municipal employees.

Five firefighters made the top 50 list, which appears here and inside today’s paper. The information used to compile the list was supplied by Town Hall and is based on the employees’ W-2 earnings in calendar year 2014.

In addition to the gas and light, police, fire and Information Technology departments, four School Department employees earned their way onto the top 50 salary list — including the top two administrators — as did two leaders of the Department of Public Works. Town Administrator Stephen P. Maio and Building Inspector John Roberto III round out the top earners’ list.

In 2014, police continued to be among the top paid employees, as they are in just about every other community in Massachusetts. Six of the top 10 spots were occupied by police, led by Sgt. George Thistle’s total gross earnings of $182,150. In addition to his regular salary and overtime, Thistle’s total salary working in Wakefield included $35,229 in private detail pay.

For police and WMGLD employees especially, the availability of overtime work proves crucial to boosting their pay each year. In the case of police and, to a much lesser extent firefighters, they also have the chance to work private details, especially when there is street construction or a utility site that needs protection from motorists.

In the Information Technology Department, Todd Bowden’s regular salary of $101,000 was augmented by around the clock coverage payment as well as much overtime as he worked on the Galvin Middle School and other projects. Department head David Knox was paid for accumulated vacation time to the tune of $20,000 because he was needed on the same projects. Town Administrator Maio said the town “probably saved close to $100,000 had we outsourced for these” types of tasks.

The gross earnings for police also reflect extra incentives for night work and for earning college degrees related in some way to law enforcement. The lucrative Quinn Bill rewards officers who have master’s degrees, bachelor’s degrees or associate degrees. Several years ago the town and police were able to agree to lesser payments for the newer members of the department. But many who have master’s degrees get 25 percent of their base pay added to their salary, while a bachelor’s degree carries an additional 20 percent for those officers grandfathered in. An associate’s degree brings 10 percent of an officer’s base pay added to his overall salary. Younger members of the department have a smaller percentage of their base added to their overall pay.

Chief Smith does not work private details but the other officers making the top 10 wage earner list do.

The town charges a 10 percent administration fee to private companies for each job a police officer gets paid to work.