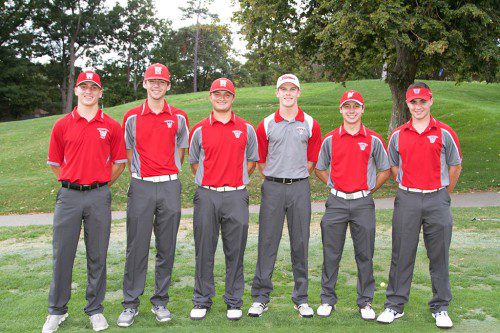 WEST BOXFORD — The Wakefield Memorial High golf team was one of seven Middlesex League squads to compete in the Div. 2 North Sectional Tournament yesterday at Far Corner Golf Club and the Warriors finished up the 2016 season with a score of 337.

The Warriors finished eighth overall in the team scoring out of 18 teams. North Andover (318), Belmont (322) and Winchester (324) are the three teams that qualified for the state tournament by finishing first, second and third.

Hurley had a great day shooting an 82, Collard shot a 96, Evangelista scored a 108, and Sullivan recorded a score of 90.

The six seniors concluded their high school careers in golf.

“They’ve all been on the team for multiple years and deserved this opportunity to play in a state level competition together,” said Coach Chris Keane. “They’re a great group of kids who helped the transition between coaches go smoothly. More important than their play this season was their leadership and ability to teach the game to our newer players.”

Northeast Regional was the other Wakefield school to clinch a berth in the sectional tournament and the Knights had a score of 356.