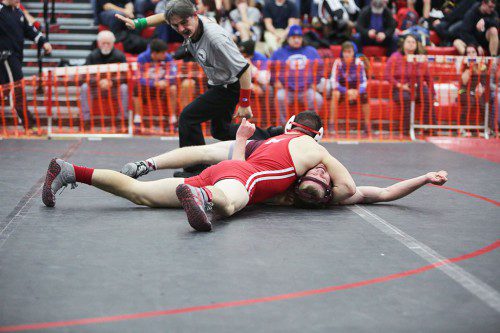 MELROSE — The Melrose Red Raider wrestling squad competed on Saturday at the Division 3 State Championship at Wakefield High School and a few Raiders have punched their tickets to All-State competition. Wrestlers Mike Doucette and Patrick Whelan will represent Melrose at the 2015 All State Championship at Salem High School on Feb. 27 and 28. Overall Melrose placed 23rd out of 57 with a combined total of 33.5 points.

Whelan is slated to take on Jim Welch of Burlington (D2) in the 160 class. He advanced after placing seventh at last weekend’s event. Whelan started the day with a 3-2 decision over Jacob Warner of Wayland. Despite falling to Mitch Prario of Somerset, 6-0, he made up for it with strong consolation play, beating Warner once again 1-0 to earn a seventh spot.

Doucette began his strong day in the 182 weight class pinning Ryan Welby of Weston at 3:40. He then took a technical fall against Austin Houghta of Tactonic. He fell to eventual state champ Matt Froio of Cohasset in the next found but beat Spencer Cleary of Sandwich. After a 3-1 decision went to opponent Noah Malhi in the next round, Doucette landed on the board in fourth. This weekend he is slated to start his day wrestling against Benton White of Minnechaug (D1).

Matt Parker was Melrose’s next highest performing wrestler, placing eighth in the 195 weight class. He stated the day with a major decision over Damion McFetridge of Northbridge. Though he fell to Noah Bucher of Scituate he pinned Jeff Griffin of Somerset, good enough for an eighth place spot.

Reigning state champ, senior Ryan Stanton, was expected to fight to retain his D3 crown in the 120 weight class but after a first round win against Dahir Hersi, Stanton was forced to forfeit for the remainder of the day (possibly due to aggravation of injury).

Antonio DiFronzo competed in the 170 weight class and took a first round win against Aoron Rocheleau of Pathfinder. Among the other Raiders who competed on Saturday were John Siebert (145 lb) Chris Reale (138 lb) and Nick Disley in the heavyweight (285).

The team is coached by Div. 3 Coach of the Year Jim Bleiler. All-State action takes place at Salem High School this Friday and Saturday.