Warriors taken down by co-op juggernaut, 47-27 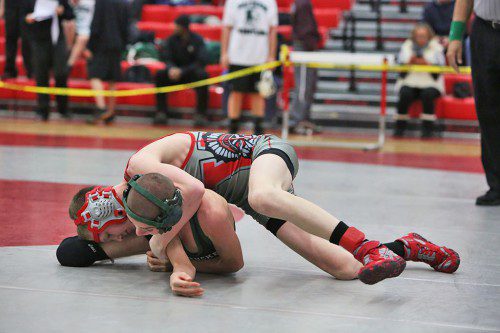 JACK SPICER, a sophomore (right), won by pin at the 106 weight class in Wakefield’s dual meet against Lynnfield/North Reading. Spicer defeated Will Grover at 4:35, but the Warriors lost the meet on Wednesday night at the Charbonneau Field House. (Donna Larsson File Photo)

The Warriors couldn’t match up numbers-wise against the combined wrestling talent of the communities of Lynnfield and North Reading as they dropped a 47-27 non-league meet on Wednesday night at the Charbonneau Field House.

Wakefield fell to 8-4 overall on the season while Lynnfield/North Reading increased it record to 13-2 on the winter.

The Warriors won five of the 14 weight classes in the meet. Four of those victories were by pin.

The Lynnfield/North Reading squad secured wins in the next seven weight classes where it compiled 38 points to take a commanding advantage.

At 113, sophomore Jake Allen was pinned by Joe Reardon at 39 seconds.

Evan McGuire, a junior, lost by fall to Joe Morse at the 120 contest.

Junior Shannon Drager lost by pin at 47 seconds to Max Wyman at the 126 weight class.

At 132, Connor Shine, a senior, stayed off his back, but dropped a 6-3 decision to Jake Mullen-Bernstein.

Lucas Pascucci accepted a forfeit at the 145 weight class for six more points for the Black and Gold.

Lynnfield/North Reading opened up a 38-6 lead after the 152 bout as senior Dan Bertini lost by technical fall (16-0) to Dom Monzione.

The Warriors ended the Lynnfield/North Reading run at 160 as Evan Gourville, a junior, earned three points with a 14-9 overtime decision against Zach Monzione.

At 170, senior tri-captain Ryan Cunningham was edged by a 6-4 decision against Victor Vontiglio.

Wakefield won the next three weight classes for 18 more points.

The final contest at 285 where Warrior senior Nick Murphy was pinned by Brendan Troisi at 3:23.

Wakefield returns to the mats tomorrow at 9 a.m. when it takes part in the Belmont Wrestling Tournament at Belmont High School.