Left-hander pitched and played first base for St. Mary’s 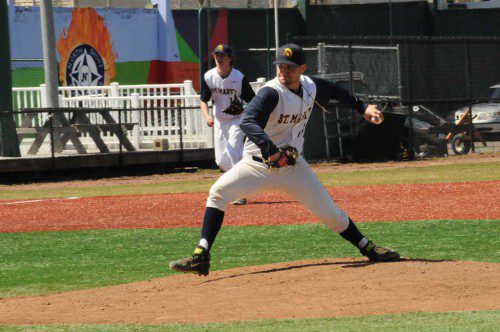 LEFT-HANDER Clay Yianacopolus, a Wakefield resident, played a crucial role for St. Mary’s in their run to a Div. 3 state title. Yianacopolus will attend Assumption College in the fall.

A product of the Wakefield Baseball youth system having played Little League, Babe Ruth and for the Townies, he was a three-year starter both on the mound and in the field for the Spartans.

This past season pitching for the Spartans, Yianacopolus was the workhorse for the staff logging 83 innings. He had seven wins, one save and an ERA of 1.40.

He also contributed at the plate with an average of .300.

In his three-year career at St. Mary’s he amassed 17 wins with four saves and seven shutouts. The left-hander also had three wins in state tournament play.

The two-time Catholic Central League All-Star will be playing locally this summer with the Wakefield Merchants as well as the Lynn Legion team.

Yianacopolus will be furthering his baseball career this fall at Assumption College for the Greyhounds.