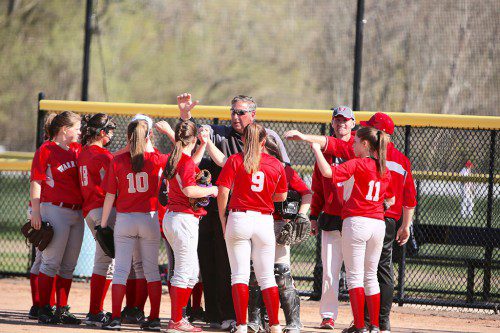 THE WMHS softball team clinched a state tournament berth and earned a preliminary round victory over Bedford this past spring. (Donna Larsson File Photo)

WAKEFIELD — The Wakefield Memorial High softball team wrapped its season recently making it into the first round of the state tournament before being knocked out by Div. 2 state finalist Tewksbury after squandering a lead.

Garnering a tournament win against Bedford in the preliminary round was quite an accomplishment for a young team that had little tournament experience and no previous tournament success. The Warriors went 11-11 overall and were 8-8 in the Middlesex League Freedom division.

Things got off to a bad start when the Warriors lost their beloved veteran assistant coach Kevin Barry to cancer at the beginning of the season. Coach Rick “Coach Q” Quattrocchi rallied his team and together they dedicated the season to Coach Barry.

“When you start the season with the death of one of the most visible guys, Kevin Barry, that was a tough circumstance. That was tough on the coaches and it was tough on the kids. But they fought through it and I know he would have been proud,” said “Coach Q.”

The team saw many players returning from their previous season as freshmen and their inexperience did cost them a few games when they were unable to put teams away.

“Most of the kids came back from their freshman year and were basically the same team. I know the record doesn’t reflect it but I think they had a better year and the reason why I say that, we lost four seniors and we lost that leadership from those four seniors. We had two captains who were a sophomore and a junior who did a great job. So for a very, very young team they did better than they did their freshman year. We were behind in games. The Melrose game we were down and game back. The Tewksbury game was a phenomenal game. We’ve got to learn to put games away. If we’d put some more games away, we’ve got 14-15 wins like we’ve averaged,” said the coach.

Captains Nicole Catino and Alexi Truesdale led the team and will return next season and be joined by Emma Hickey and Meghan Burnett.

“They were voted on by their peers, which I think is quite an honor,” said Quattrocchi.

The team is stocked with pitching between Julia Purcell, Meghan Burnett and Truesdale.

“I thought our pitching came along very well. Julia Purcell, who at the start of the season was basically my third pitcher, she came on and she and Burnett were 1-2 and it kind of let me use Truesdale, who I think is the best shortstop in the league, to just let her settle in at shortstop,” he noted.

He went on to praise the rest of his squad.

“Vanessa Kaddaras replaced a legend at third base in Emma Kraus and I thought she played flawlessly and my outfield did a great job. My twins (Hannah and Olivia Dziadyk), Burnett, Mia Romano and Marissa Patti sprinkled in there, I’m very happy. Nicole Catino, defensively, is the best catcher in the league as far as I’m concerned.”

Hickey led the team in hitting with a .457 average.

He also went on to praise the heart and work ethic of his squad.

“They don’t miss practices. They’re all on the Honor Roll. In all three levels we didn’t have a kid in detention, didn’t have a kid suspended for any reason. We had winning records at the freshman level, the JV level with (Coach) Lisa Silva went 16-2.”

Despite having many players expected to return, “Coach Q” informed them that each season begins with no guarantees regarding playing time.

“Like I tell all of my kids, ‘You have to try out all over again. I don’t care if you were an all-star or a captain. Everything’s open,’ but they work hard. The majority of them will play another 40 games in the summer. That’s dedication. Then in the fall they play on the weekends.”

Still, with another year of experience under their belt, the coach feels they have the potential to be very strong next season.

“Coach Q” retained the rest of his coaching staff and was joined by Tom Purcell.

“We been together as a staff, except for Tom Purcell. This is his first year but we’ve been together with Steph Martin and Lisa Silva for seven years,” said “Coach Q.”