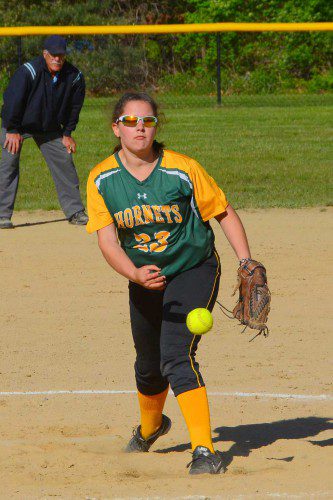 Senior Taylor Connor made a diving catch in the bottom of the seventh with one out and two runners on base to help preserve the victory. Perrone threw 108 pitches, 63 percent for strikes and helped her cause with a double. Perrone, (2), Abby Paine, Driver, (3), and Cassidy Gaeta all had hits for the Hornets.

The Lady Hornets notched their 15th win of the season on May 23, a 12–0 beatdown of Triton in five innings at the Little School field. North Reading pounded out 14 hits against against two Viking pitchers. Julia Perrone and Cassandra Pascucci split the hurling duties for North Reading, with Perrone getting the win with four innings, (49 pitches, 77 percent for strikes) and Pascucci throwing final frame on just eight pitches.

Freshman Cassandra Pascucci started the game and went the distance as the Hornets dominated Newburyport, 12–0 in a game that was shortened to five innings last Wednesday.

Pascucci threw 67 percent of her 79 pitches for strikes and limited the Clippers to only three hits and four quality at bats. The game was effectively over in the first inning as North Reading jumped all over starting pitcher Paige Gouldethrope for six runs in two–thirds of the inning. Taylor Connor clubbed a no–doubt home run and Cassidy Gaeta doubled. North Reading did not score in the second inning, but then tacked on two runs in the third, fourth and fifth innings.

Stephanie Gleason came on to pitch the final 3.2 innings for Newburyport, but the Clipper defense didn’t help either pitcher much by committing six errors.