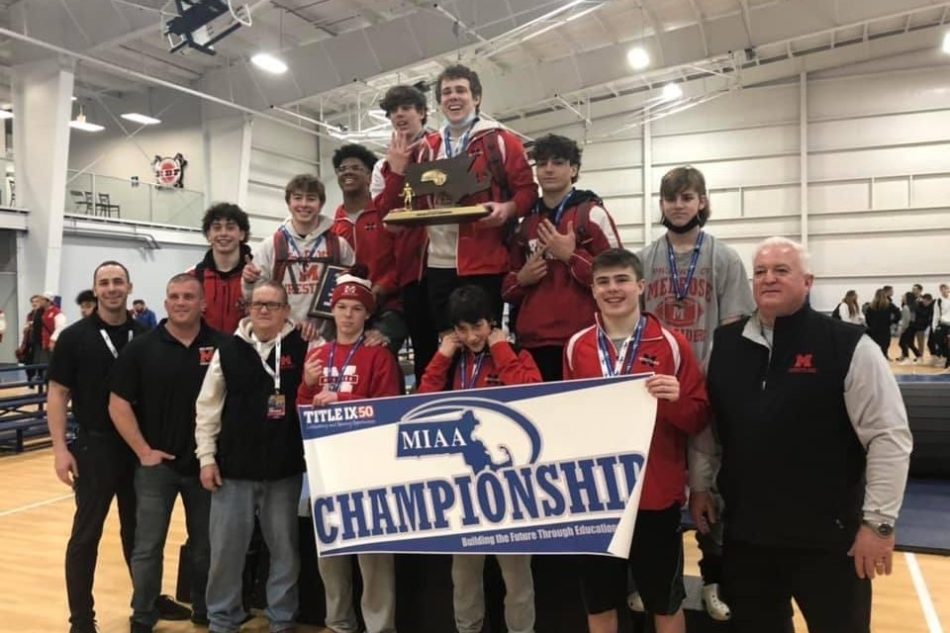 “Back to normal” brought hardware galore

MELROSE—Save for some early mask-wearing in the fall, Melrose High sports roared back to life in 2021-22 with a return to normal programming. And how lucky for players, coaches and fans. Melrose earned 8 league titles, one state championship, two sectional titles and a number of individual state championship titles over the course of the academic year. All Scholastics were awarded, ten teams reached playoffs while others qualified for state sectionals. Taking home league trophies were volleyball, girls cross country, golf, boys soccer, girls indoor track, wrestling, boys lacrosse and girls tennis. Nearly 75 students athletes were named All-Stars.

Best of all? Games played without interruption and fans came back in droves. Whether you watched via computer or from the stands, chances are you were part of that fanfare. But in case you missed it, here are some of the top moments over the academic year.

Melrose High wrestling became Div. 3 State Champions on Feb. 19, their second Div. 3 state title since 2020 and third since 2017. Melrose’s 104 point total narrowly edged Tewksbury, who finished second at 103. Medalists Sean Thomas (2nd in the 120) Braden Marceau (2nd in the 285) along with Shea Fogarty (third at 160), Alec McLaughlin (fourth at 132) and Oto Albanese (fifth at 145) helped give Melrose the collective points they needed for a state win.

Marceau was particularly clutch for Melrose, wrestling in the finals against eventual champion Nate Ickes of Wakefield, whose team finished third overall. Avoiding a pin against an experienced Ickes helped Melrose cling on with 104 points for total victory. Marceau would later steamroll through the state competition and eventually medal his way to New Englands, where he placed 5th. He is a highly recruited football player as well, currently entertaining offers from Div. 1 colleges and Ivys.

You may only get one “Storm the Court” moment in a high school career. For the MHS volleyball team it happened on Nov. 11, 2021.

The chant “warm the buses” was hard to miss. The Melrose High girls’ volleyball team, #5 seed with a 21-2 record, had been on the ropes the entire night at Billerica High during the third round of the Div. 2 State finals and No. 4 seed Billerica was ready to deliver the final blow. In the best of five sets, Melrose lost the first and third sets. Fighting back in the fourth, they forced the tie-breaking, fateful fifth set which goes to 15 points. Melrose had dug a hole, trailing 0-6 and 3-8 and 3-10, when the chants started. Then came a remarkable 12-point run from Melrose. The final point that was one for the ages. From the cool serving of senior captain Autumn Whelan, the perfect set by Gia Vlajkovic and a final dagger by Endicott-bound Abby Hudson, a stunned Billerica watched Melrose erupt in celebration and punch their ticket to the State Semifinal. It was exactly what the student body needed after two years of COVID-19. It was also coach Scott Celli’s 501st career win as coach.

See for yourself the final play on YouTube at https://youtu.be/OQNTJqijARQ

After the winning kill, the MHS student fan section poured on to the court in victory formation. Melrose captains Elena Soukos (22 kills), Chloe Gentile, Autumn Whelan and Abby Hudson (who traded her knee for a trophy) were presented the Final Four trophy along with coaches Scott Celli, Ryan Schmitt and Lydia Mays. “It was the greatest comeback in Melrose volleyball history,” said coach Celli after the game. Fans agreed, and were heard saying “Best game I’ve ever been to in my life” in the days to come. If anyone wonders why Melrose is “Volleyball USA” it’s because of games like this. 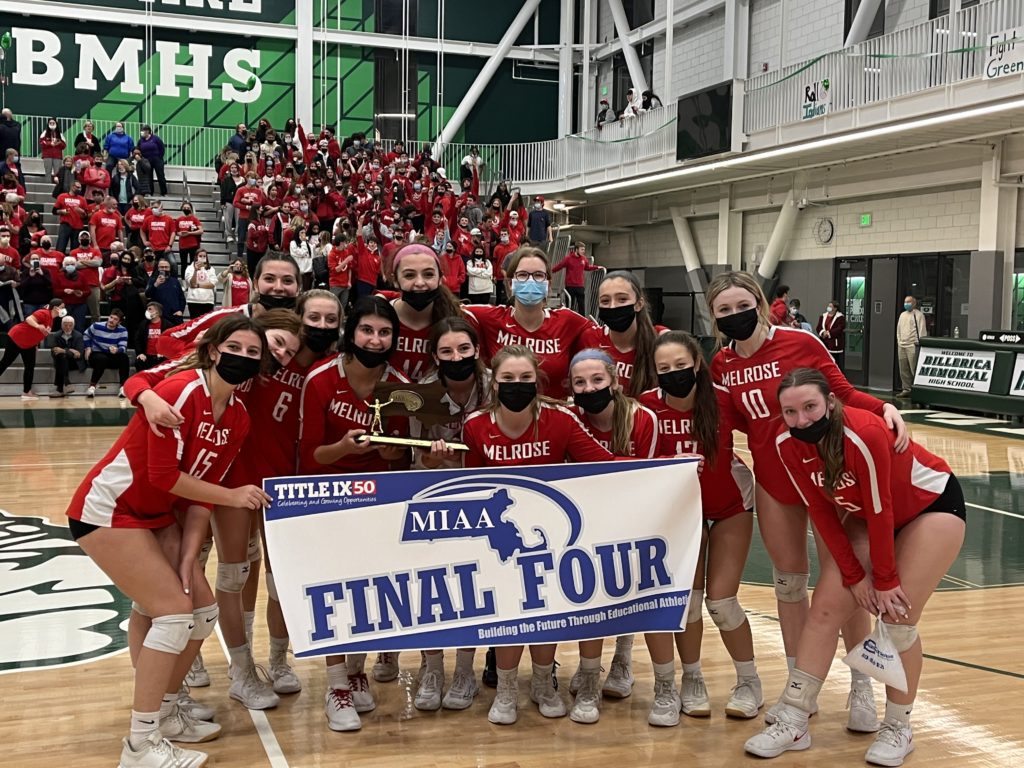 A GAME FOR ages. The MHS volleyball team’s epic comeback over Billerica sent them to the State Final 4. (file photo)

3. Greatest “Brawl in the Hall” ever.

Memorial Hall in Melrose was the place to be on Feb. 2 when arch- rivals Melrose and Wakefield faced each other for the 4th annual “Brawl in the Hall” which would determine the Middlesex League title. Both Melrose and Wakefield entered the building unbeaten at 5-0 and considered state contenders. (Melrose would eventually win the state) But only one could emerge as the undefeated league champ and that honor went to Melrose, who topped Wakefield, 37-33 in a down-to-the-wire thriller. Wins and decisions were secured by Sean Thomas, Marco Albanese, Alec McLaughlin, Nico Chiulli, Steve Fogarty and Shea Fogarty. With Melrose bracing on to a lead of 34-30, and no room for error, Melrose junior Dom Delgado had the round of the night with a heart-stopping 12-11 decision over Ben Burdetsky, enough to steal the Brawl title back from the dreaded Warriors.

The Melrose High girls’ outdoor track team became Div. 3 State silver medalists and crowned two state champions in one of the team’s best showings ever when they competed at the Div. 3 State Championship from May 27-29. Melrose crowned not one but two state champions in seniors Anna Mackey and Taylor Pesce, who topped the entire Div. 3 field in the 800 and triple jump, respectively. It was a second state title for Mackey, making her one of the most celebrated MHS athletes in recent history. The Colby-bound runner clinched a Div. 3 state title in the 1000 over the winter track season. Pesce simply had a day – besides becoming state champ, she took home a silver medal in the high jump and advanced to finals in 100 hurdles. Both advanced to All States.

The Melrose High golf team became repeat league champions last fall with a 5-0 sweep of the Middlesex Freedom league. They also wowed at the 2021 Middlesex League Shoot Out by earning the ML Freedom Shootout title at Bear Hill in Stoneham. Their senior captain Brian Healy swept the competition to become the ML Freedom Shootout winner with a score of 80. Earning the trophy as a team were the three Melrose representatives sent to Bear Hill that day: Brian Healy, Patrick Cotter and AJ Dell Isola. The team also made an appearance at the Div. 2 North Sectionals represented by Patrick Cotter, AJ Dell Isola, Jason Pino, Roddy McGillicuddy, Dom Lamantea and Andrew Izzi. 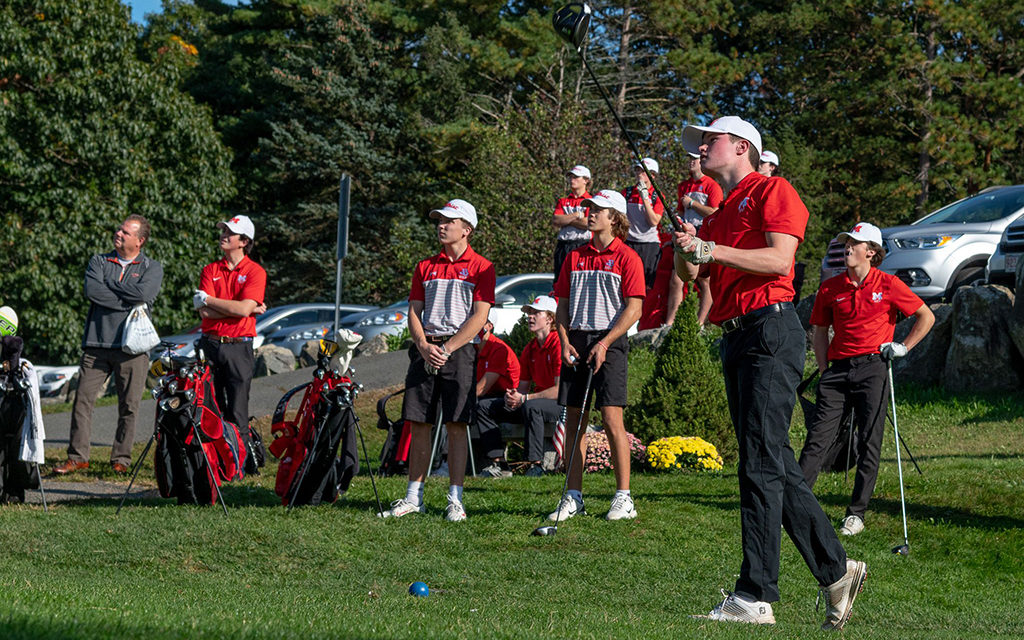 6. Cross Country teams dominate league, division. Both MHS fall cross country teams proved to be among the best in the state by advancing to the MIAA Div. 2 Finals. On the boy’s side, a season surge led to a sterling performance at the MIAA All States Final. Melrose was ranked 7th but ran their best to finish with an outstanding 5th place, thanks in part to the work of Ellis lurilli-Hough, Will Dugan and Ryan Cotugno. The league champion girls team became Div. 2A silver medalists at the finals, which advanced them to All States, thanks in part to the work of Jillian Bakey and Lily Kavanaugh. They also advanced with runners Charlotte Tysall, Elaine Albuja, Maizie Frakt, Juliet Moore and Kate Sikkema. Look for the Melrose girls’ and boys’ teams to be odds on favorites for league titles in the fall of 2022.

After sweeping the Freedom League in a perfect 10-0 season, Melrose entered playoffs as the #7 seed in Div. 2 tournament, earning a home match against Milton whom they beat, 3-2. Picking up wins were senior Isabella Cottrell in second singles, Saoirse Stallings in third singles and the first doubles pair of Ava McSorley and Anna Wong. Cottrell and Stallings would engage in epic 3-hour matches and, after prevailing, Melrose advanced to the Sweet 16 to play Longmeadow. Despite falling there, Melrose head coach Lydia Mays considers the 2021 MHS team among the best in MHS history. Few would disagree.

The second annual Unified Basketball “Hoop-a-Palooza2” tournament was held at the Galvin Middle School in Wakefield on May 25, 2022. Wakefield opened up its two, outdoor courts for jamboree play and offered pizza slush and music for all attendees. Over 125 Unified partners and athletes from eight different local teams, including Melrose, Malden, Bedford, Lexington, Stoneham, Belmont, Burlington and Watertown, competed for an afternoon jamboree featuring some of the states’ best Unified athletes. Melrose High senior Unified players relished the opportunity to battle the best in the Middlesex League as a finale. They included Kevin Burke, Nick Cram, Claire Morse, Ben Donovan and Harry Jaggers. And the special guest stars, the MHS cheer team, Pat Patriot and Wally the Green Monster, were the ultimate icing on the cake.

The ML Freedom Champion Melrose boy’s lacrosse team had another playoff-qualifying season, collecting eleven wins over the spring with the most impressive being a stunning 8-7 OT thriller over perennial rival, Reading, a team who made Div. 2 State Semifinals just last week. Reading has been a constant thorn in Melrose’s playoff runs in the last 5 years, and just when it seemed like the Rockets permanently had the Red Raiders number, Melrose pulled off their most impressive win of the season thanks to relentless attacking from Brady Pitcher, Steve Fogarty and Shea Fogarty, who helped Melrose rally from a 3-0 early deficit. Late game efforts from TJ Sullivan, Liam Maher and the game winner from Steven Fogarty sealed the deal. New net minder, sophomore Michael Fuccione, had the game of his early career. “We just never let up,” noted Melrose coach Matt James at the time.

10. MHS Gymnastics: the little team that could.

The Melrose High gymnastics team started the season down to just 6 healthy competitors and at its conclusion, qualified for a post season with an earned appearance at the MIAA North Sectionals, where they competed among the 12 best North high school teams in Massachusetts. Melrose got the job done after averaging a high score of 135.57, up considerably from pre-season expectation. Additionally, two of Melrose’s All-Around athletes, Katherine Carney and Lucy Hannon competed at the MIAA Individual State Meet. Hannon medaled in 9th.

11) MHS Cheer Team, Middlesex League Champs. The team also punched their ticket to States, placing second in their division at the league competition, receiving the highest scores ever compiled by a MHS cheer team. It summed up a historic season for the athletic squad.

*MHS baseball’s signature, walk off wins versus Belmont and Danvers;

*Runner Gabe Buffonge for advancing to All States in track;

Gone But Not Forgotten:

Richard Whitworth: There would be no Melrose High swimming without the longtime MHS coach and Melrose YMCA head, who spent over 40 years coaching both Melrose High’s boys and girls teams. The YMCA New England Swim Championship is named after this local legend. “Whit” as he was affectionately called, passed away on Dec. 28, 2021 and will be inducted into the Melrose Athletic Hall of Fame in September.

George Lovett and Dick Collis: The Ultimate Back Row Boys. A staple at basketball and volleyball games, George and Dick missed nothing and enjoyed watching MHS teams (girls in particular) steamroll into sectional and state titles in the early aughts into recent years. This writer was always welcomed in the back row, learning much about the history of Melrose sports from them. They passed away April 2, 2022 and March 30, 2022, respectively. The duo dedicated years of volunteer work to the Melrose Athletic Hall of Fame, which they were founding members of. Connery in particular knew more about the history of Melrose athletics better than anyone who attended MHS. That we lost them the same year (within days) will make the stands of Melrose High feel a little emptier. Though, faces have emerged as a new generation of Back Row Boys/Girls. We think George and Dick would approve.