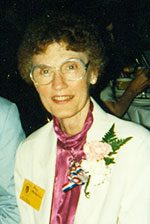 WAKEFIELD — Ann Marie McCallion, 80, of Wakefield, formerly of Woburn and Somerville, died Tuesday, Oct. 13, at her home surrounded by family.
Born in Cambridge on Jan. 8, 1935 she was the daughter of the late Thomas and Nora (Fogarty) Foley.
Mrs. McCallion was a graduate of St. Joseph School, Class of 1952. She was raised in Somerville and had been a longtime resident of Woburn before moving to Wakefield.
She was a member of Most Blessed Sacrament Church and was a former member of the Sodality.
Mrs. McCallion was an avid reader and loved baking. She enjoyed her time spent in Bar Harbor, Maine and Cape Cod; as well as the three trips to Ireland which she had taken with her husband.
She was the beloved wife of Joseph P. McCallion. She was the loving mother of Leslie Ann Gadsby and her late husband Robert of Manchester, N.H., Joseph McCallion Jr. and his wife Meredith of Lexington, Deborah McCallion of Billerica, Mary Salazar and her late husband Eugenio of Reading and David McCallion of Wakefield. She was the sister of Catherine Sesin and husband Peter of Arizona, Maureen Edwards and partner Bob of Woburn, Peggy Tarantino and husband Paul of Clinton, Catherine Steele and partner Dennis of Everett and the late Thomas Foley. She was the sister-in-law of Francine Foley of Winchester. She is also survived by her 10 grandchildren: David and partner Ambrosia, Lisa, Kristine and husband Christopher, Nora and husband Robert, Ross, Jacqueline, Natalia, Anthony, Peter and Adam; as well as three great-grandchildren: Michael, Caleb and Nolan.
Her funeral will be held from the McDonald Funeral Home, 19 Yale Ave., Wakefield on Friday at 9 a.m. followed by a funeral Mass in Most Blessed Sacrament Church, 1155 Main St., Wakefield at 10 o’clock. Interment will follow at Calvary Cemetery in Winchester.
Visitation for relatives and friends will be held at the funeral home on Thursday from 4 to 8 p.m.