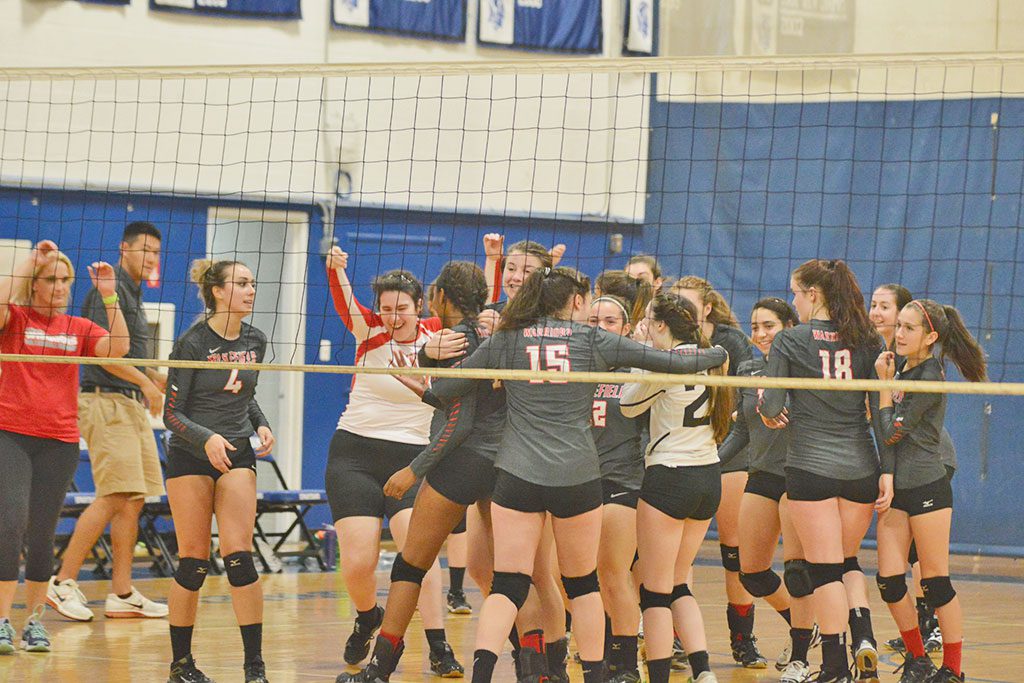 THE WMHS girls’ volleyball team celebrates its come from behind 3-2 victory over Stoneham last night at Stoneham High School. The Warriors won their first league match of the season.

STONEHAM — The girls’ volleyball team earned its first Middlesex League win of the season. However that victory sure didn’t come easy.

The Warriors fell behind two sets and had to rally for a 3-2 triumph over Stoneham last night at Stoneham High School.

“It was an exciting night for us in Stoneham. We entered in search of that first league win and now we have it,” said Coach Nicole Trudeau. “We won 3-2. Coming into a gym and winning the first three sets right out of the gate is much easier than what these girls did.”

Wakefield dropped the first two sets, 25-15 and 25-18 and things looked bleak at that point in the match.

“There was a lack of passion in the air. However, every member of this team saw the floor last night and contributed to last night’s victory,” said Trudeau. “The people on the court were playing with their hearts, the bench was into the game, hungry and ready to jump in when called upon and the fans were incredible. It was like we had a home court advantage in their gym. That’s what high school sports is all about.”

In the third set, the Warriors were down 21-17 and needed the victory to continue the night. Nicole Roberto fired off six in a row to keep Wakefield in the game. During a timeout, Trudeau reminded the girls that they had everything they needed to turn this around and asked them to play from their hearts, not their heads. Wakefield ended up winning the third set 25-21.

“It’s not an easy thing to set up from behind and start the whole match over after dropping two games, but they did it. The fire was there and we were not going to give away any points. We went back to our most recent strategy of forcing the other team to earn any points they take from us,” said Trudeau.

The highlight of the fourth set was a crazy, diving save from Mackenzie Story. She pursued a third ball from the ground behind the referee stand and got it up inside the antenna and over to their side.

“It was one of the most athletic plays I’ve  ever seen. That is what happens with pure pursuit and athleticism come together. From there, we just continued to layer on the points with a calm and confident approach to the game,” said Trudeau. “Ally Coggswell was making great choices to our hitters who continued to make smart aggressive plays at the net.”

The Warriors eventually won the fourth set 25-23 to force the tiebreaker set.

The fifth set brought another serving run from Roberto who put five serves in play giving Wakefield the confidence and consistency it needed to grab that 15-point victory. Abbie Badgett, Julia Brown, Emma Butler and Story all had incredible nights offensively.

“They were working together, everyone improved their individual games and inspired the best from their teammates,” said Trudeau. “Abbie Badgett ended the match with an uncontested kill to the floor in front of the Spartans’ libero. Everyone went nuts. It was a huge burden lifted off their shoulders and it was great to see all their hard work and dedication pay off. It is a proud moment to see your entire team — the entire program — coming together to get it done.

“My favorite moment of the night was when manager (junior) Jennifer Synan rushed off the bench — arms open wide — right into Abbie’s arms. I’ve been proud of these girls all along, doing everything we ask of them to get better. However, tonight was a special moment on so many levels.

“This was a great way to tee us up for the second half of the season,” continued Trudeau. “We have some teams we will see the second time around and I’m not so sure they are expecting this team.”

The Warriors, now 3-11 overall and 1-11 in the M.L. Freedom division, host Wilmington tomorrow night at 5:15 p.m. at the Charbonneau Field House.