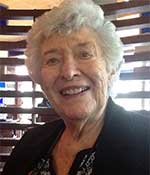 WAKEFIELD — Anne (Fahey) Loughlin, 91, a longtime resident of Wakefield, died peacefully on Friday March 30, 2018 at Lahey Hospital, having been visited by many family and friends.

Born in Boston on July 28, 1926, she was the daughter of Leo P. and Eva M. Fahey. Anne was raised in Milton and graduated Milton High School. She earned her RN from Carney Hospital School of Nursing, 1947, and bachelor’s degree from Boston College School of Nursing in 1954.

Anne loved being a nurse, and her early career included nursing at Boston City Hospital and Tufts Medical Center, before returning to the new Carney Hospital in Dorchester, where she was head nurse of a cardiothoracic surgery ward, and instructor of nursing arts.

In 1972, she joined the Wakefield School Department and worked for 20 years as a school nurse, first at the high school (during the double sessions), followed by many years in Wakefield’s then 12 elementary schools. For a few years prior to retirement, she was the nurse at both the junior high and Atwell elementary school.

Anne and a fellow school nurse established the Salvation Army’s Wakefield Unit in the late 1970’s, after recognizing many unmet needs for Wakefield’s school children and their families. Their efforts provided for many families with an acute need for food, fuel, housing and other assistance. This effort also led to the founding of the Wakefield Holiday Shop where, for approximately 40 years, Anne and others collected donations of toys and other gifts to provide families in need with the means to have Christmas.

Anne was a woman of great faith and service and shared these gifts as an active member of St. Joseph Church, as nurse at St. Joseph School, a teacher of Christian doctrine, Eucharistic minister for the sick and elderly in the community as well as for patients hospitalized at Melrose-Wakefield Hospital.

Anne had 25-years in service to others as a member of the St. Vincent DePaul Society. In addition, Anne served on the Board of Directors of the Boit Home.

Anne enjoyed both life and golf, as well as spending time with family and friends. In addition to her daughters, Marie and Anita, she was a loving mother to her son-in-law Alec R. Correa and to adopted daughter Maria DellaRocco (Wakefield) and devoted grandmother to Robert M. Correa (Northwood, NH) and Alec Michael Correa (Northwood, NH). She was a sister to the late Leo Fahey Jr., the late Joan McCarthy (Cohasset), Patricia Sheehan (Duxbury) and James “Jim” Fahey (Wakefield). She is survived by many cousins, nieces and nephews.

Her funeral will be held from the McDonald Funeral Home, 19 Yale Ave., Wakefield on Thursday, April 5, at 10:30 a.m. followed by a funeral Mass in St. Joseph Church, 173 Albion St., Wakefield at 11:30 a.m. Visitation for relatives and friends will be held at McDonald Funeral Home on Wednesday, April 4, from 4 to 8 p.m. Interment will be at St. Patrick’s Cemetery in Stoneham.